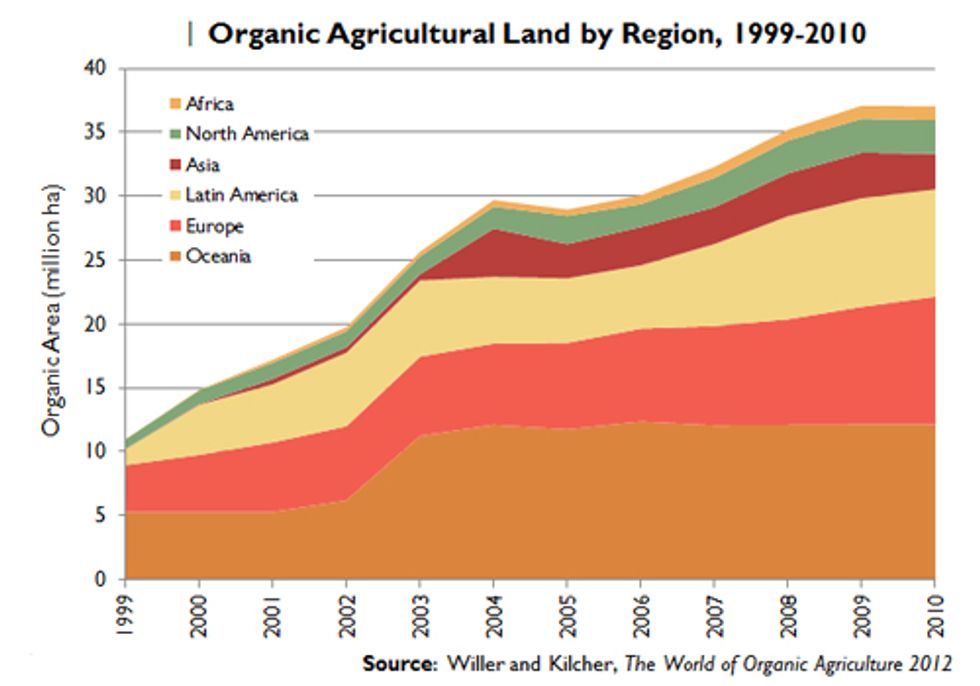 Despite a slight decline between 2009 and 2010, since 1999 the global land area farmed organically has expanded more than threefold to 37 million hectares, according to new research conducted by the Worldwatch Institute for its Vital Signs Online service. Regions with the largest certified organic agricultural land in 2010 were Oceania, including Australia, New Zealand and Pacific Island nations (12.1 million hectares); Europe (10 million hectares); and Latin America (8.4 million hectares), write report authors Catherine Ward and Laura Reynolds.

Organic farming is now established in international standards, and 84 countries had implemented organic regulations by 2010, up from 74 countries in 2009. Definitions vary, but according to the International Federation of Organic Agriculture Movements, organic agriculture is a production system that relies on ecological processes, such as waste recycling, rather than the use of synthetic inputs, such as chemical fertilizers and pesticides.

“Although organic agriculture often produces lower yields on land that has recently been farmed conventionally, it can outperform conventional practices—especially in times of drought—when the land has been farmed organically for a longer time,” said Reynolds, a researcher with Worldwatch’s Food and Agriculture Program. “Conventional agricultural practices often degrade the environment over both the long and short term through soil erosion, excessive water extraction, and biodiversity loss.”

Certifications for organic agriculture are increasingly concentrated in wealthier countries. From 2009 to 2010, Europe increased its organic farmland by 9 percent to 10 million hectares, the largest growth in any region. The U.S. has lagged behind other countries in adopting sustainable farming methods. When national sales rather than production are considered, however, the U.S. organic industry is one of the fastest-growing industries in the nation, expanding by 9.5 percent in 2011 to reach $31.5 billion in sales.