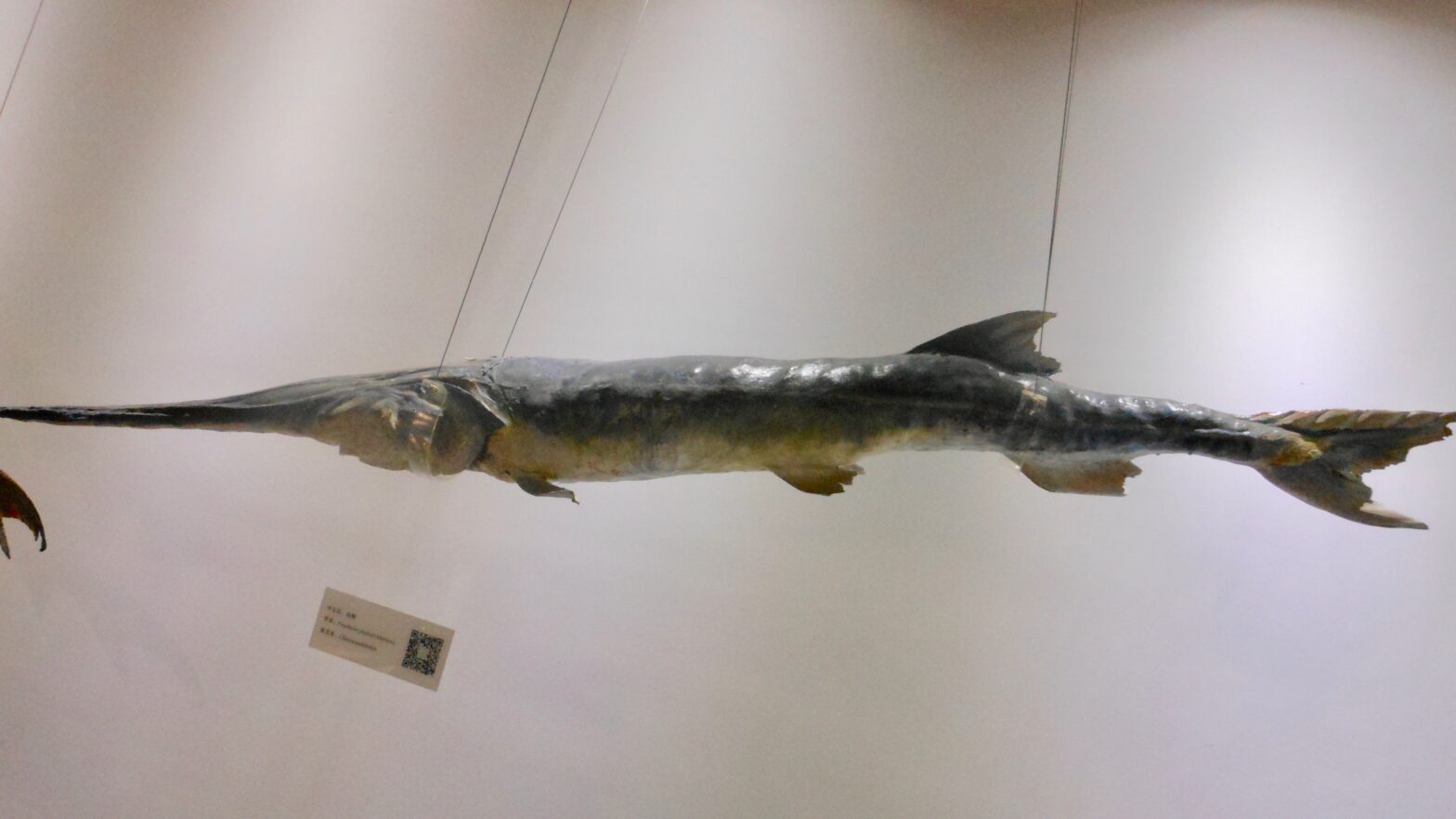 A Chinese paddlefish exhibited in the Museum of Hydrobiological Sciences, Wuhan Institute of Hydrobiology of Chinese Academy of Sciences. Alneth / CC BY-SA 4.0

Scientists have concluded of the largest freshwater fish species in the world is now extinct because of human activity.

The Chinese paddlefish, sometimes called the “panda of the Yangtze River,” was found to have been lost to overfishing and habitat destruction, Phys.org reported Wednesday. Its extinction was announced and documented by researchers at the Chinese Academy of Fishery Sciences in a paper published in Science of the Total Environment.

The Chinese paddlefish could grow to be 23 feet long and 992 pounds in weight, according to CNN. It took its name from its long snout, according to Phys.org. It was also ancient: The species had existed since 200 million years ago and survived the extinction of the dinosaurs, National Geographic pointed out.

The species declined slowly in the last century, at first because of fishing. In the 1970s, 25 tons worth were caught a year. But an even more devastating change came when the Gezhouba Dam was built on the Yangtze in 1981, dividing the fish from its spawning grounds. The scientists think the species was functionally extinct by 1993, meaning there weren’t enough of them left to reproduce effectively. The last time scientists saw one alive was 2003.

The study authors searched for evidence of the fish from 2017 to 2018 by setting up nets and visiting fish markets but found no evidence that any were left alive, Phys.org explained. The researchers think it died out between 2005 and 2010 and recommend that it be considered extinct according to IUCN Red List criteria, the study said.

“There have been no successful cases of breeding the Chinese paddlefish in captivity,” Wei told state broadcaster CCTV, as CNN reported. “Hence, when it died out in the wild, the species has become completely extinct.”

While it is too late to save the Chinese paddlefish, the researchers hope to use the lessons from its demise to save other endangered species that live in the Yangtze. The study authors could not find another 140 river species they wanted to see and think it is important to study some of them further to determine their conservation status, according to National Geographic.

“We must urgently act to save those species for which some chance still remains,” Ivan Jaric, a study co-author and biologist at Czechia’s Institute of Hydrobiology and the University of South Bohemia, told National Geographic.

The Chinese paddlefish’s fate also shines a spotlight on large freshwater fish worldwide. Most big freshwater animals are threatened with extinction, University of Nevada, Reno fish biologist Zeb Hogan, who was not involved with the study, told National Geographic.

“This is the first of these very large freshwater fish to go and many are at risk—the concern is that more will go extinct, but the hope is that we can reverse their decline before it’s too late,” Hogan said.