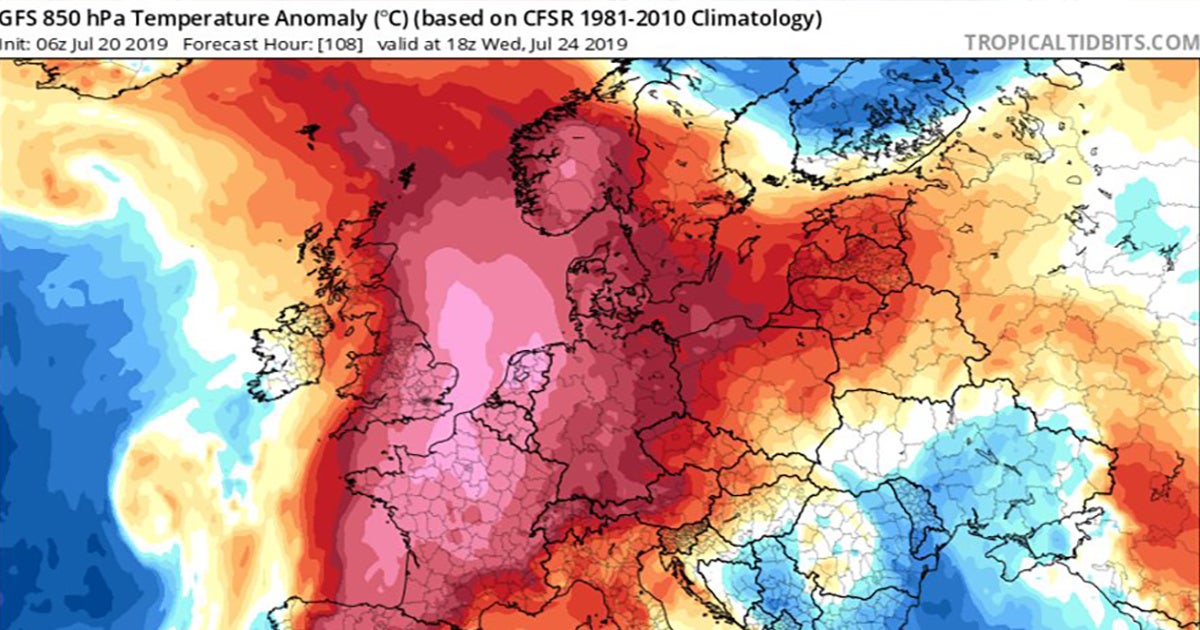 Europe is gearing up for another extreme heat wave that could set all-time records for several European countries.

Paris could surpass its all-time high of 40.4 degrees Celsius on Thursday, Meteo France predicted Monday, according to The Washington Post’s Capital Weather Gang. That record has not been broken since 1947. Overnight minimum records were already broken in Southwest France Monday night, the World Meteorological Organization (WMO) tweeted.

Across the channel in the UK, records could also fall. Britain could beat its record for July, its all-time high temperature record and its overnight record, CNN reported Monday.

Wednesday and Thursday will be the hottest days of the year so far in most of England. London and Southeast England could reach 37 degrees Celsius on Thursday, which would break the July record of 36.7 degrees Celsius, recorded at Heathrow in 2015. The record for the highest minimum temperature, currently set at 23.3 degrees Celsius for July and 23.9 degrees Celsius overall, could be exceeded Tuesday night into Wednesday morning. And the all-time hottest temperature recorded in the UK — set at 38.5 degrees Celsius in Faversham in Southern England in 2003 — could also fall.

We are expecting to break temperature records this week. Although not everywhere will see the headline numbers the heat will be widespread, peaking on Thursday #heatwave #HeatwaveUK pic.twitter.com/ShplGsAP8z

“We’re certainly looking at a warm week across the country—the heat is quite widespread,” a Met Office spokesperson told CNN.

Belgium, the Netherlands and Luxembourg could also all surpass their all-time high records with highs of 39 degrees Celsius, CNBC reported.

Large parts of #Europe face another #heatwave this week, and new record temperatures are predicted. This map from @DWD_presse shows the extent of the heat on Thursday, with temperatures above 40°C. Follow advice, stay cool and heed fire warnings. pic.twitter.com/9H4HDnpYio

This week’s heat wave follows another spell of hot temperatures that baked Europe in late June. The earlier heat wave broke an all-time record in France when the mercury hit 46 degrees Celsius in Vérargues. It was the first time in the country’s modern history that a temperature over 45 degrees had been recorded, the WMO said.

Unlike the earlier heat wave, this week’s hot temperatures will also reach the UK and Scandinavia, according to The Washington Post. Spain and Portugal will also be impacted, and the dry heat is expected to lead to heightened wildfire risk.

The Copernicus Climate Change Service (C3S) warned that much of France and Spain were at the highest possible risk for wildfires, and large parts of Portugal, Italy, Belgium and Germany are also at “high” or “very high” fire risk, CNBC reported.

“Every heatwave occurring in Europe today is made more likely and more intense by human-induced climate change,” a World Weather Attribution study of the June 2019 heat wave, which was published quickly without peer review but by experts in the field, concluded.

2018’s record-breaking summer temperatures in the UK were made 30 times more likely by the climate crisis, and summers like 2018 will be the norm by 2050, occurring around every other year, the Met Office said.

This past June was the hottest June ever recorded, If July is the hottest July on record, it could also be the hottest month humans have ever measured, climate scientist Michael Mann tweeted.