Cyclone Harold Batters Fiji, Tonga Could Be Next 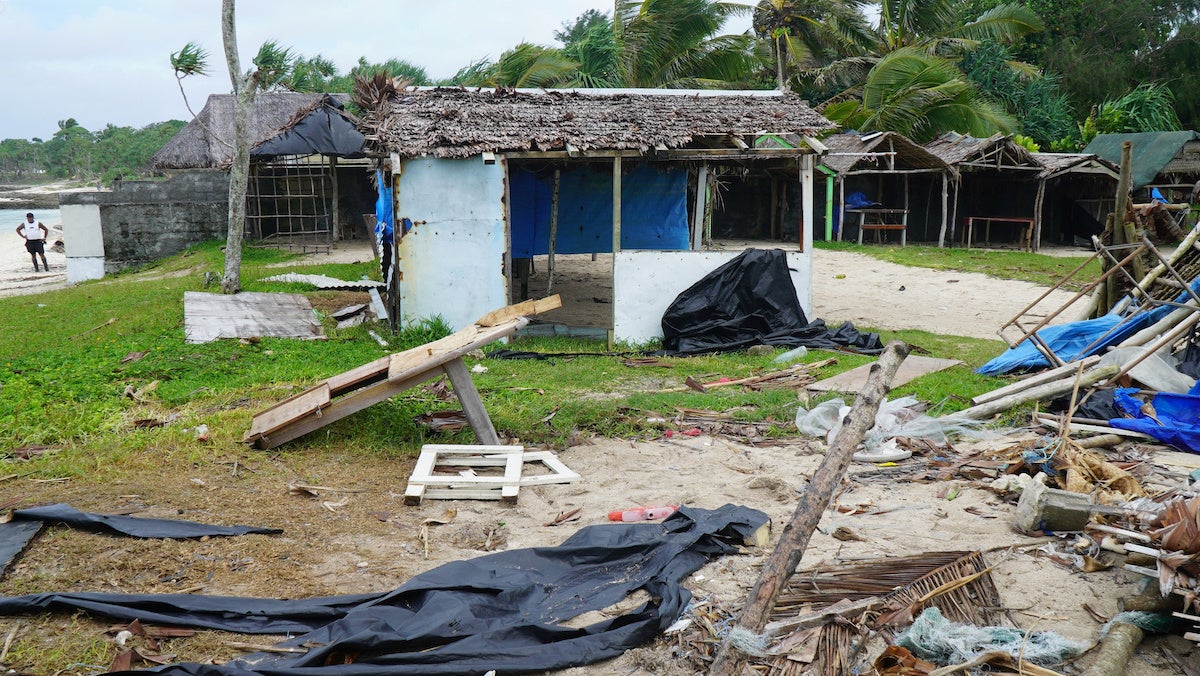 A building damaged by Cyclone Harold in Vanuatu on April 7, 2020. It has since moved on to Fiji. PHILIPPE CARILLO / AFP via Getty Images

After flattening buildings and cutting communications on the Pacific Island nation of Vanuatu Monday and Tuesday, Cyclone Harold moved on to batter Fiji Wednesday.

The storm is also expected to reach the island nation of Tonga within days, in a reminder of how vulnerable Pacific nations are to extreme weather events supercharged by the climate crisis and made more dangerous by sea level rise.

“It is unfair that countries on the frontlines of the crisis, like those in the Pacific, are constantly having to bear the brunt of the economic impacts of extreme weather events, that are made worse by carbon pollution in places like Australia,” Greenpeace Australia Pacific Head of Pacific Joseph Moeono-Kolio said in a statement.

After smashing northern Vanuatu, Cyclone Harold looks set to wreak havoc in both Fiji and Tonga. Tough times across the Pacific. pic.twitter.com/Vg3mOVkq0D

In Fiji, the storm struck the largest and most populous island of Viti Levu, home to its capital of Suva. It flattened buildings and caused flooding, The Guardian reported.

“The worst of TC Harold will strike Fiji through this afternoon … Flying debris and floodwaters can be deadly. All Fijians should stay indoors unless directed to evacuate,” Prime Minister Frank Bainimarama warned early Wednesday.

Injuries were reported in Suva, according to Reuters, but the storm also cut communication lines.

“We’ve seen reports of injuries,” Vasiti Soko, the director of the National Disaster Management Office, told Reuters by telephone. “As to the number, as well as the intensity, of the injuries, that’s yet to be ascertained.”

There is discrepancy in the reports of how intense Harold was when it reached Fiji. Reuters reports it was still a Category 5 storm, while The Guardian said it had decreased to a Category 4.

In either case, the storm’s arrival was complicated by the need to stem the spread of the new coronavirus.

Fiji is in lockdown and currently has 15 confirmed cases and no deaths, The New York Times reported.

However, the government said on Twitter it had taken measures to prepare for a storm striking during the outbreak.

“Given this virus struck Fiji in cyclone season, we knew from the start we had to weatherproof our Covid-19 containment efforts to the very real possibility of a severe storm striking,” the government wrote.

Thank God we have, as Cyclone Harold –– a category five cyclone currently rivalling the strength of TC Winston –– is currently wreaking havoc on our Pacific brothers and sisters in Vanuatu.

“Our evacuation centres are safe, they are sanitised and monitored to ensure they do not surpass capacity,” he said in a social media post reported by Reuters. “Those under quarantine due to the threat of coronavirus will not mix with others.”

There have been no reports of fatalities in the storm, but 10 homes in Suva were destroyed.

Meanwhile, the extent of the damage in Vanuatu is still uncertain, as communications are still down to the hardest-hit islands of Espiritu Santo, Malo and Pentecost, according to The Guardian. It is expected their restoration will bring bad news today.

It is known that northern Vanuatu suffered its worst direct hit from a topical cyclone on record, The Washington Post reported.

Next in the crosshairs is Tonga, where a supermoon and high tide warning for Thursday and Friday could exacerbate the damage, The Guardian reported. The storm is expected to strike the country in 48 hours.