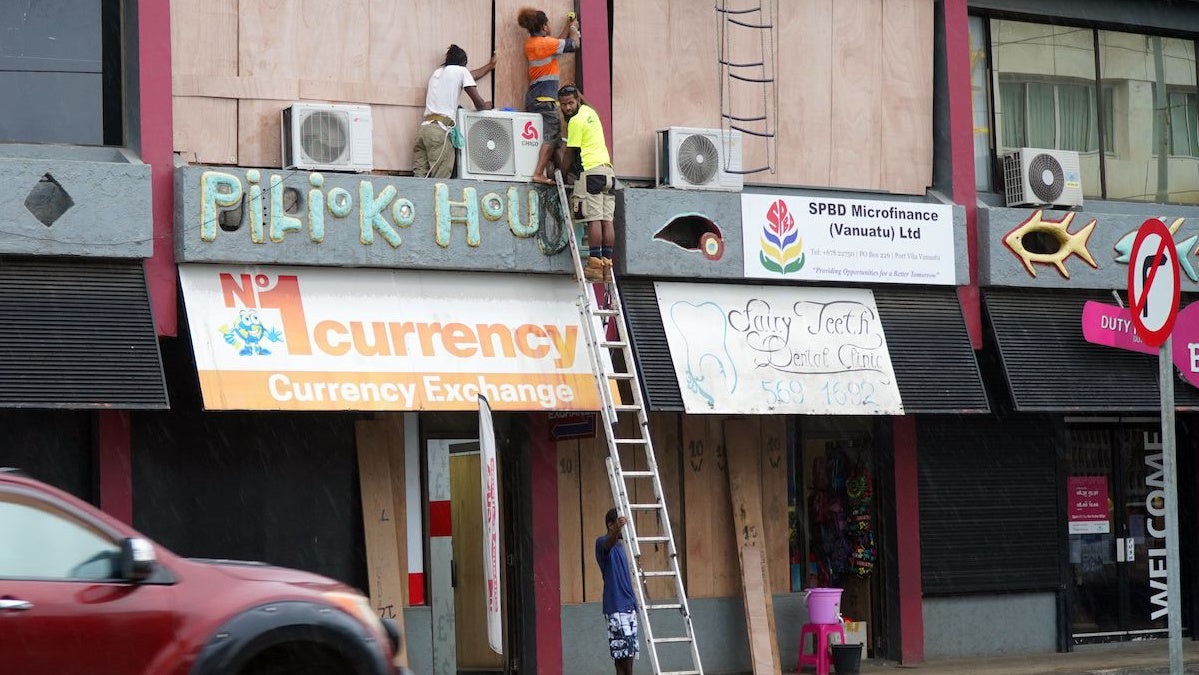 Locals board up their shops in Vanuatu's capital of Port Vila on April 6, 2020 ahead of Tropical Cyclone Harold. PHILIPPE CARILLO / AFP via Getty Images

The most powerful extreme weather event of 2020 lashed the Pacific nation of Vanuatu Monday as it tries to protect itself from the new coronavirus.

Cyclone Harold made landfall as a Category 5 storm on the island nation’s north and west after strengthening off the coast on Sunday, The Guardian reported.

“For those in Vanuatu it doesn’t get much worse than this,” WeatherWatch.co.nz head forecaster Philip Duncan said.

Vanuatu's islands are currently surrounding the eye of Severe Tropical #CycloneHarold, a chart-topping category 5 system with sustained wind speeds above 200km/h near its core. pic.twitter.com/PH5deI7Ora

The storm moved slowly over very warm ocean waters as it approached Vanuatu, Duncan said. The climate crisis is expected to make tropical cyclones stronger and more intense as they are fueled by warmer waters. It also makes them more devastating to islands like Vanuatu already battling sea level rise.

“As the Pacific battles to contain the spread of Covid-19, Tropical Cyclone Harold is a reminder that climate change represents yet another existential threat to nations like Vanuatu, that is not of their making,” Greenpeace Australia Pacific head of Pacific Joseph Moeono-Kolio said in a statement.

Harold made landfall with winds of up to 133 miles per hour around 1 p.m. local time in Sanma province, located on the country’s largest island and home to its second-most populated city, Luganville, Reuters reported.

While there are no reports of injuries, images shared on social media show buildings flattened by the storm.

#CycloneHarold #Vanuatu #TCHarold #Santo First images coming in from main street of #Luganville on Espiritu Santo island which is experiencing the full force of Harold. pic.twitter.com/ltcVijAyxZ

“Communications to Santo and Malekula [Vanuatu’s two largest islands] are cut now, so we don’t know what’s happening,” Eric Durpaire, the chief of UNICEF Pacific’s Vanuatu’s field office, told The Guardian. “The latest information we had was that the roof of the municipality building of Santo has collapsed and there is flooding.”

The last time that Vanuatu weathered a Category 5 storm was when Cyclone Pam struck in 2015. It needed massive amounts of international aid to recover, but help this time will be complicated by the global coronavirus pandemic.

“Restrictions to international borders and travelers won’t be lifted after the cyclone. Humanitarian workers who wanted to come and assist, won’t be able to, or they will have to do 14 days quarantine,” Durpaire told The Guardian.

The coronavirus complicated cyclone preparation as well. Vanuatu has no confirmed cases of COVID-19, but is trying to keep it that way, as it is afraid its health system would be unable to handle an outbreak.

Cyclone Harold, a category 4 storm and Earth's most powerful weather event so far in 2020, has just made landfall in Vanuatu in the south Pacific.

There are no recorded Covid-19 cases (yet) in Vanuatu, but the country has only two respirators.

This is a dire emergency. https://t.co/j3tXKiybef

To prevent the arrival and spread of the virus, Vanuatu has closed its borders, instituted a curfew and banned gatherings of five or more, though some of these measures were relaxed to allow people to gather in emergency shelters ahead of the storm.

Cyclone Harold has already proved deadly. On Friday, when it was just a Category 2 storm, it swept 27 people off a ferry in the Solomon Islands. Police said Sunday they had recovered the bodies of three women and two men, while 22 others remain missing.