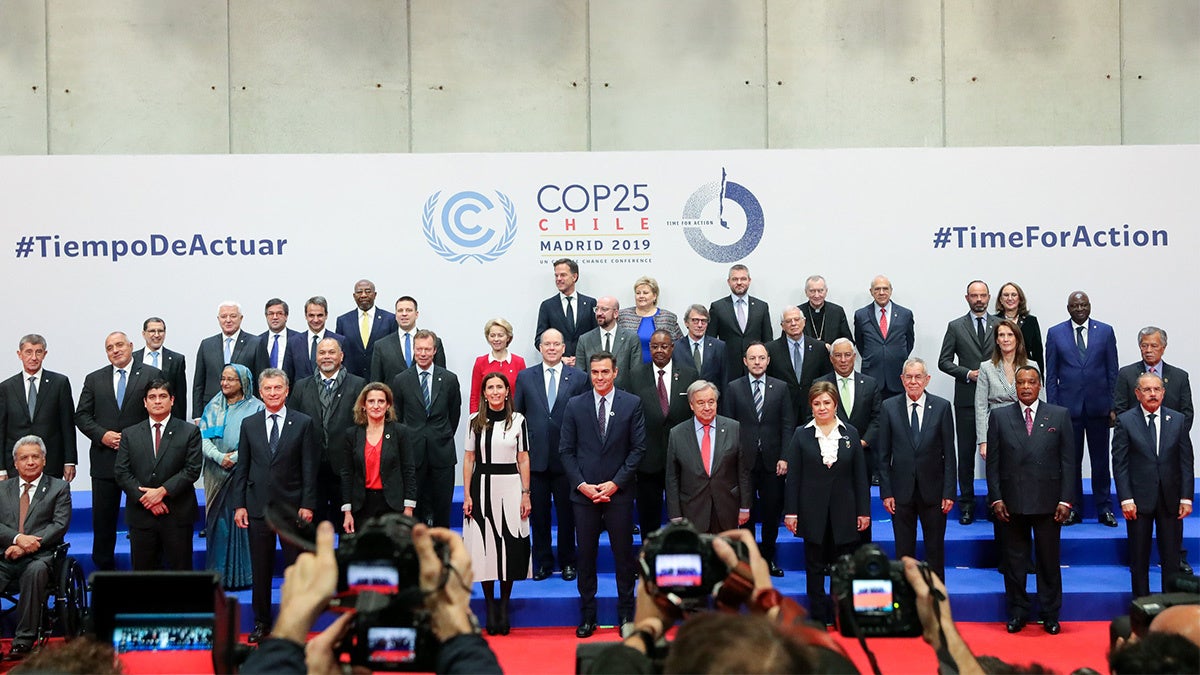 Leaders pose during the first day of COP25 on Dec. 2 in Madrid, Spain. Jesús Hellín / Europa Press via Getty Images

COP25, the UN Climate Change Conference, begins today in Madrid, and UN Secretary-General António Guterres wants everyone to know the stakes are high.

“[C]limate change is no longer a long-term problem. We are confronted now with a global climate crisis,” Guterres said before the conference on Sunday. “The point of no-return is no longer over the horizon. It is in sight and hurtling towards us.”

The human species has been at war with the planet.

Now the planet is fighting back.

Climate change has escalated into a global climate emergency.

But my message at #COP25 is not one of despair, but one of hope and successful #ClimateAction. https://t.co/e5KwYOeLsi pic.twitter.com/EZptqMDfFf

The conference, which will run from Dec. 2 to 13, follows on the heels of two dire climate reports released last week. The World Meteorological Association announced that atmospheric carbon dioxide levels in 2018 had reached their highest point in three to five million years. And a UN study found that countries must lower greenhouse gas emissions by 7.6 percent per year for the next decade in order to limit global warming to 1.5 degrees Celsius above pre-industrial levels.

Climate leaders hope that countries will up the ambitions of their Paris agreement pledges in Madrid, ahead of the 2020 deadline to do so, BBC News explained.

“Some 70 countries have pledged to become carbon neutral by 2050, this must be carried on at Madrid COP,” Sonam Wangdi, the Chair of the Least Developed Countries (LDC) group in UN climate change negotiations, told BBC News. “There must be an agreement among us all to do our fair share. If it doesn’t happen in Madrid it could be too late for 2020 pledges.”

When the Paris agreement was reached in 2015, the Associated Press explained, world leaders said they would limit warming to below two degrees celsius compared to pre-industrial levels, with an ideal goal of limiting it to 1.5 degrees. But the emissions reductions pledges currently on the books would still lead to a temperature rise of more than three degrees Celsius, Guterres pointed out Sunday, and many countries are not even meeting these inadequate commitments.

“Our war against nature must stop,” Guterres said.

Conference chair and Chilean environment minister Carolina Schmidt echoed Guterres’ sense of urgency in her opening remarks Monday, calling on attendees to acknowledge the severity of the climate crisis.

“Those who don’t want to see it will be on the wrong side of history,” she said, as the Associated Press reported.

Newly elected President of the @UN #ClimateChange Conference #COP25 in Madrid, @CarolaSchmidtZ, says that people need to be at the center of #ClimateAction. Watch live webcast >> https://t.co/wVZtMiqAWA #TimeForAction pic.twitter.com/6bKYEKN8VF

In addition to emissions reductions, there are two other major issues that need to be ironed out at the conference, BBC News explained.

The first is whether there will be a fund established to pay for climate-related losses and damages that cannot be prevented or mitigated, like a certain amount of sea level rise. Developing countries say they need help paying for a crisis they did little to solve, but wealthy countries are worried about being on the books for centuries of extreme weather and coastal flooding to come.

“The climate crisis has been causing death, despair and displacement in the global south,” Harjeet Singh from Action Aid told BBC News. “This bullying of the countries hardest hit by climate change, by those that got rich from extracting and consuming fossil fuels, must end now.”

The second issue is how to establish new rules for carbon markets under Article 6 of the Paris agreement. The issue was supposed to be resolved at COP24 in Katowice, Poland last year, but parties could not come to an agreement.

“I don’t even want to entertain the possibility that we do not agree on Article 6,” Guterres said, according to Reuters. “We are here to approve guidelines to implement Article 6, not to find excuses not to do it.”

COP25 was originally supposed to take place in Chile, but President Sebastián Piñera stepped back from hosting following weeks of protests. Spain then offered to host the talks in Madrid instead.

Around 29,000 scientists, negotiators, activists and leaders, including around 50 heads of state, are expected to attend, according to the Associated Press.

Of the world’s top emitters, only the EU is sending senior leadership. The U.S., China and India are all sending lower level officials or ministers.

President Donald Trump has begun the process of withdrawing the U.S. from the Paris agreement, but Democratic House Speaker Nancy Pelosi will lead a delegation to the talks.

“While it’s great Speaker Pelosi is coming to Madrid in place of Trump, symbolic gestures are no substitute for bold action,” Jean Su from the Center for Biological Diversity told BBC News. “America remains the number one historic contributor to the climate emergency, and even Democratic politicians have never committed to taking responsibility for our fair share.”