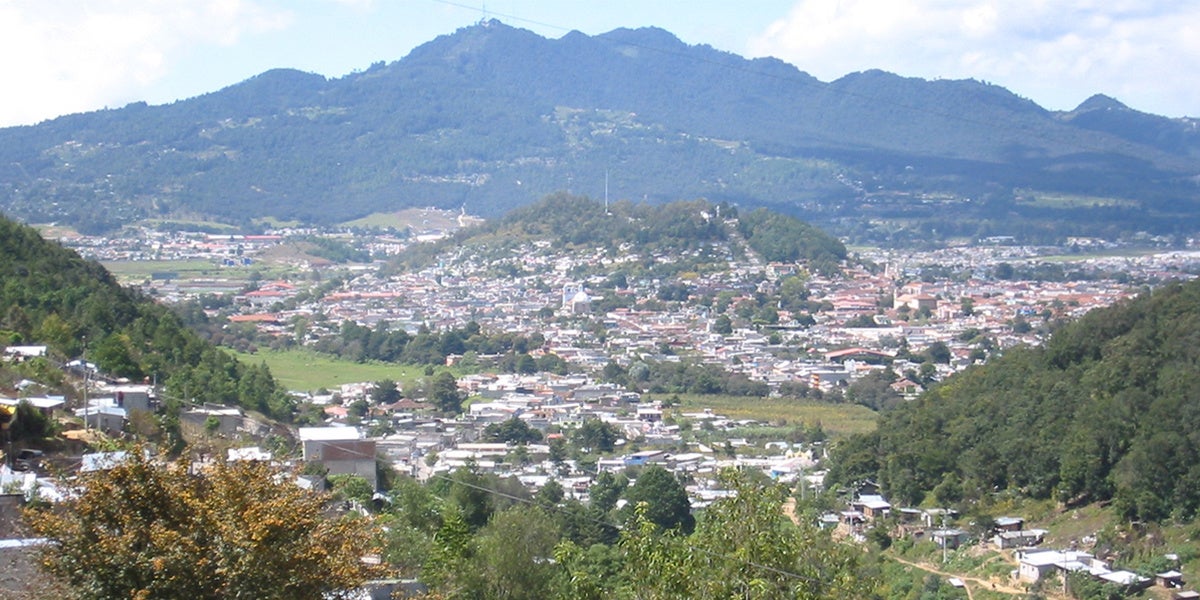 San Cristóbal de las Casas, in the Mexican state of Chiapas. Tjeerd Wiersma from Amsterdam, The Netherlands / CC BY 2.0

A lack of drinking water and a surplus of Coca-Cola are causing a public health crisis in the Mexican town of San Cristóbal de las Casas, The New York Times reported Saturday.

Some neighborhoods in the town only get running water a few times a week, so residents turn to soda, drinking more than half a gallon a day on average.

Abadía and her parents are some of the many in the town who suffer from diabetes as a result of their limited drinking options. The mortality rate from diabetes in Chiapas, the region of Mexico where San Cristóbal is located, has increased by 30 percent from 2013 to 2016. It follows heart disease as the region’s second leading cause of death, killing 3,000 a year.

Scientists say that part of the town’s water woes is due to climate change.

“It doesn’t rain like it used to,” Ecosur research center biochemist Jesús Carmona told The New York Times. “Almost every day, day and night, it used to rain.”

The lack of rain means the artesian wells that supplied the town in the past don’t get enough water.

But residents also blame a local Coca-Cola factory, both for the product it sells and the water it diverts. The factory has a deal with the federal government allowing it to extract more than 300,000 gallons of water a day at the extremely cheap rate of 10 cents for every 260 gallons.

“When you see that institutions aren’t providing something as basic as water and sanitation, but you have this company with secure access to one of the best water sources, of course it gives you a shock,” clean water nonprofit Cántaro Azul director Fermin Reygadas told The New York Times.

Part of the problem is that the deal between the plant, owned by Femsa, a company with the rights to bottle and sell Coca-Cola in Latin America, and the federal government benefits both at the expense of the town itself.

“Coca-Cola pays … money to the federal government, not the local government,” Kettering University social scientist Laura Mebert told The New York Times, “while the infrastructure that serves the residents of San Cristóbal is literally crumbling.”

Anger at the company led to protests in 2017 demanding the plant shut down. Demonstrators marched on the building wearing masks and holding crosses that said “Coca-Cola kills us.”

Coca-Cola released a statement in response to The New York Times article, saying the bottling plant paid market rate for the water it used and that the company had worked with locals for a decade to build water tanks, rooftop rain collectors and develop water conservation projects.

“We also agree too much sugar isn’t good for anyone, and that is why we are taking actions around the world to help people drink less sugar from our beverages,” the statement said, adding that 45 percent of their Mexican product portfolio was low or no sugar.

The company, however, has a history of presenting misleading information about the health benefits of its products.

As recently as 2015, it was uncovered that Coca-Cola funded the Global Energy Balance Network (GEBN) to argue that exercise, not limiting calorie intake, was the best way to lose weight and stay healthy. In documents uncovered in March, the company even said it saw the GEBN as a “weapon” in a “growing war” over the causes of weight gain.

Similarly manipulative tactics are partly responsible for the proliferation of Coca-Cola in Chiapas.

In the 1960s, Coca-Cola and Pepsi put up billboards in indigenous languages often showing people in the traditional dress of the native Tzotzil people.

Coca-Cola has since been integrated into local culture and religion. In the nearby town of San Juan Chamula, worshipers in local churches pray over chickens and bottles of soda. Many Tzotzil people even believe the beverage has healing powers.

“Coca-Cola is abusive, manipulative,” local activist Martin López López told The New York Times. “They take our pure water, they dye it and they trick you on TV saying that it’s the spark of life. Then they take the money and go.”

Bottled Water Companies Pay Next to Nothing to Siphon Freshwater From Pristine Lake https://t.co/GCCn1SrGXE @OurWaterCounts @WaterAidAmerica