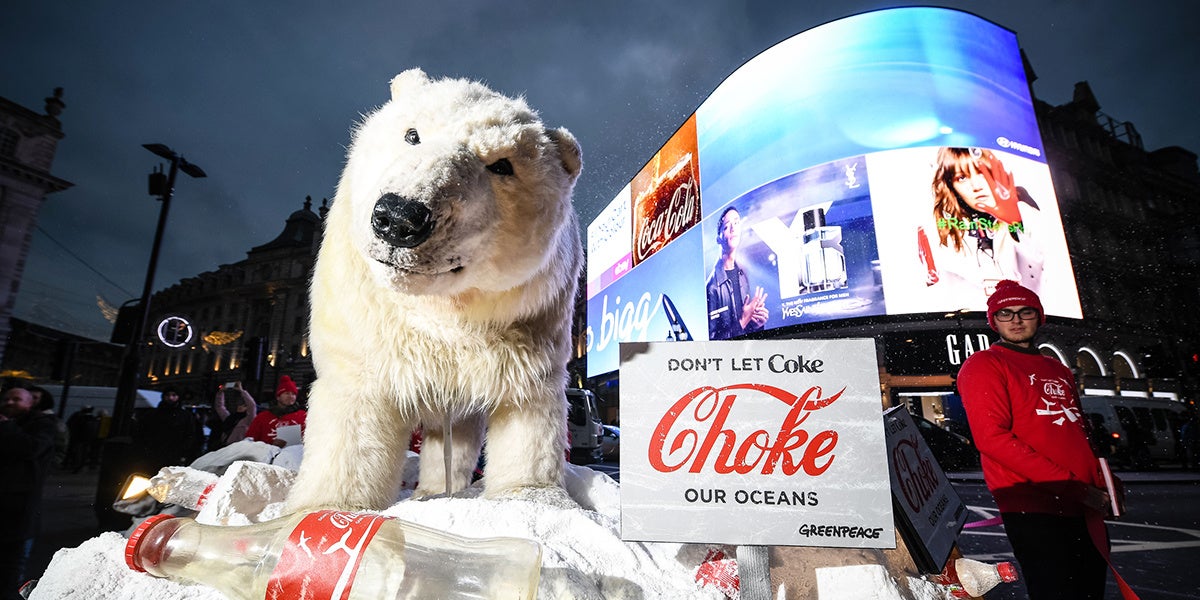 The long awaited policy from the world’s largest soft drink company featured a series of measures weaker than those previously announced for Europe and the UK.

The plan failed to include any reduction of the company’s rapidly increasing use of single-use plastic bottles globally, which now stands at well more than 110 billion annually.

The massive increase in plastic waste in our oceans, and increasingly in our food chain, is a result of our dependency on throwaway items like single-use plastic bottles. Instead of focusing on reducing the amount of plastic it produces—the sure fire way to reduce ocean plastic pollution—Coca-Cola is trying to offset its huge plastic footprint by investing in a bit more recycling. China’s refusal to accept more plastic waste, and the resulting backlog in plastic exporting nations, shows that we can’t recycle our way out of this mess while we continue to make the mess bigger.

As the most recognizable brand in the world, and the biggest plastic bottle producer, Coca-Cola has a special responsibility to lead the way in reduction of single-use plastic. Its plan is full of band-aids and will do very little in the way of making a meaningful impact on the amount of plastic entering our waterways and food chain. Coke has a long way to go to show it is taking the plastics epidemic seriously.

Coca-Cola produces more than 110 billion single use plastic bottles each year, and billions of these end up in landfills, rivers and the sea.

Greenpeace estimates that Coke has increased its number of single-use plastic bottles by nearly a third (31 percent) since 2008 and that they now account for almost 70 percent of Coke’s packaging globally. [68 percent in 2016 sustainability report]. Friday’s announcement revealed no plans that would reverse this trend.

And while Coke now backs Deposit Return Schemes in the UK, following pressure from environmental groups, the company has not announced a similar policy change at a global level and remains opposed to schemes in many other countries, including Canada, the Netherlands and Israel.

The plan contrasts starkly with the announcement made by UK retailer Iceland earlier this week that it will become the first major retailer globally to eliminate single-use plastic packaging throughout its own brand products within 5 years, a comprehensive solution that removes the problem rather than just trying to manage it.

Greenpeace is urging Coca-Cola to make firm commitments to cut its plastic production by investing in alternatives to single-use plastic bottles, including committing to expand its use of new delivery methods such as Freestyle dispensers and self-serve water stations with reusable containers.

#SundayReading: We have a whole world of plastic that needs to be replaced with other biodegradable materials. Here's how you can launch your own anti-plastic movement:
https://t.co/wtnOyoqP1Z