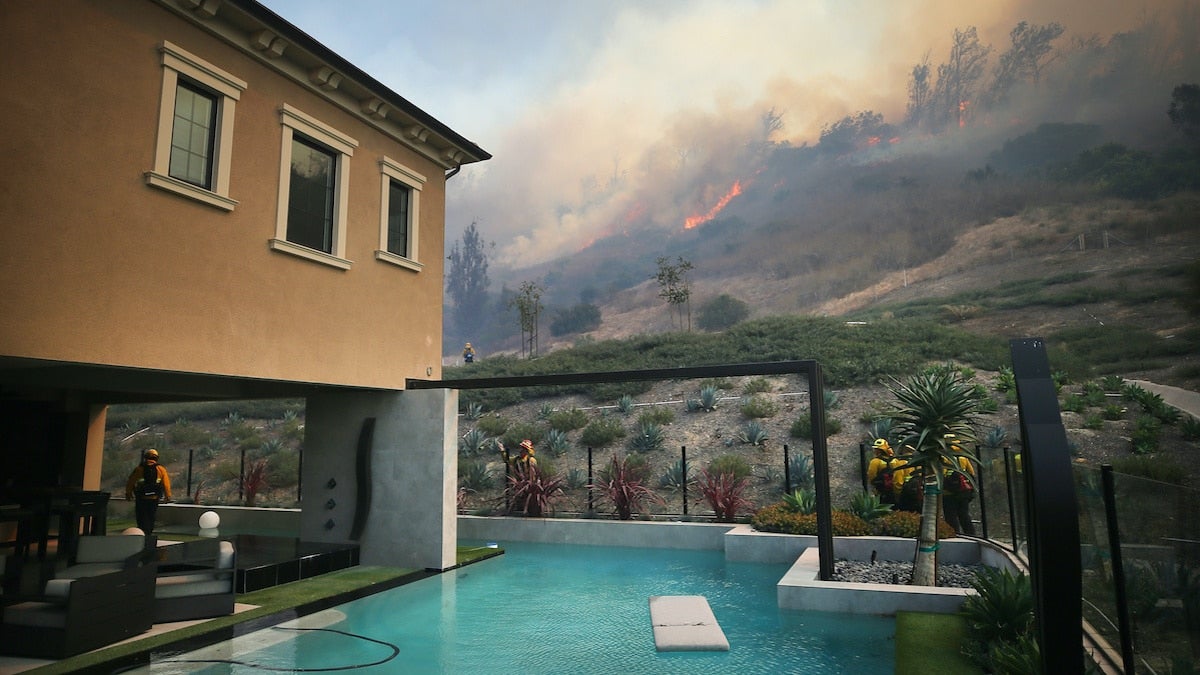 The Silverado Fire rages near a home in Irvine, California on Oct. 26, 2020. Mario Tama / Getty Images

The two firefighters suffered second and third degree burns over most of their bodies while battling the larger Silverado Fire and had to be intubated. They are 26 and 31 years old.

“They are gravely injured. Their families are with them,” Orange County Fire Authority (OCFA) Fire Chief Brian Fennessy said, as USA TODAY reported. “We are giving them all the support we can.”

The Silverado Fire was first reported at 6:47 a.m. near Irvine, California, CBS Los Angeles (LA) reported. At first, it was only 10 acres, and firefighters hoped it could be limited to the brush in a less populated area of the city, USA TODAY reported. But the flames were fanned by strong winds of 20 to 30 miles per hour, with gusts up to 70 miles per hour. In three hours, it grew to 2,000 acres, CBSLA reported.

“The wind is crazy, my family has been through it in Malibu,” evacuee Ruby Johnson told CBSLA. “It’s a crazy thing, never had to experience it ourselves. You can replace clothes and things, but you can’t replace your lives. I’ve got all the pictures and valuables, so we’re ready to go.”

As of Monday evening, 500 firefighters were battling the blaze, which had spread to 7,200 acres and was zero percent contained, OCFA tweeted.

The second fire of the day was the Blue Ridge Fire, which ignited just before 1 p.m., as CBSLA reported further. It broke out in the Chino Hills above Yorba Linda, according to USA TODAY. On its own, it prompted almost 5,000 evacuations, according to CBSLA. It seriously damaged at least one residence.

By the end of the day, there were around 200 firefighters working on it and it was zero percent contained, OCFA tweeted. By late Monday night, it had spread to 6,600 acres.

As with every extreme weather event during the 2020 hurricane and fire seasons, evacuations were complicated by the ongoing spread of the coronavirus pandemic. Fire evacuee Kelsey Brewer told USA TODAY how she and her three roommates had to make a plan for where they could safely shelter. They decided to head to the home of her girlfriend’s mother because it was spacious and she lived there alone.

“We literally talked about it this morning,” Brewer said. “There’s nowhere you can go to feel safe.”

The new blazes also come amidst a devastating fire year for the U.S. In California, fires since August have killed more than 30 people and forced thousands to flee, BBC News reported. Fires in California, Colorado, Idaho, Montana, Oregon and Washington State have scorched more than five million acres, The New York Times reported.

And the nightmare is far from over for Southern California, as the arrival of the Santa Ana winds brings low moisture, National Weather Service Sacramento meteorologist Jim Mathews told USA TODAY. He said the weather conditions now were similar to those that had fueled destructive fires in the past, like the Kincade Fire in 2019 or the Camp Fire in 2018.