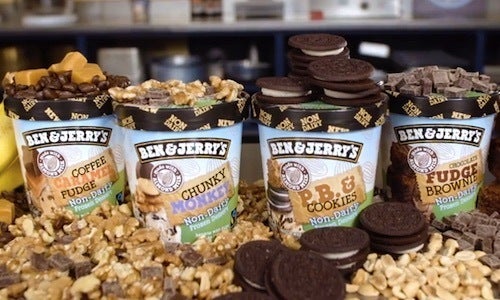 Introducing our #nondairy line – certified #vegan, made with almond milk, and oh so creamy! https://t.co/P3coMEmA0T pic.twitter.com/akvBYrFp1x

“You dared us to go dairyless—and we did!” company boasts. “Ben & Jerry’s Non-Dairy flavor creations are made with almond milk and so boldly loaded with chunks and swirls that you’ll get Ben & Jerry’s euphoria in every bite.”

The move comes after a concerted effort to not just satisfy the lactose-intolerant crowd, but environmentally conscious ice cream lovers, too. According to TIME, “these non-dairy creations have been two-and-a-half years in the making and are partly a response to a 2014 Change.org petition that racked up more than 28,000 signatures, including one from the current U.S. Senator from New Jersey Cory Booker.”

The authors of the petition wrote:

For many, Ben & Jerry’s sets the ice cream agenda. They are in a position to lead the way and make non-dairy ice cream a mainstream choice, like meatless Mondays. Offering an ice cream for their vegan customers would signal their support for cutting back on animal products. There is now a scientific consensus that animal agriculture is the single largest contributor to global warming, outstripping even the transportation industry in its production of greenhouse gases. Moreover, offering a non-animal product line of ice cream would signal to their customers that such alternatives can be mainstream and don’t mean sacrificing great flavor and their favorite brands, and that they don’t have to be vegan to enjoy them.

As for the taste, the folks at Huffington Post did a taste test and were surprised at how some of the flavors were incredibly creamy despite being nondairy. Of the Coffee Caramel Fudge, they said: “This baffling creation tasted and felt like it was full of milk and dairy and all the creamiest creations. The coffee extract and caramel swirls balanced really well with the almond milk.”

In terms of nutrition, TIME reported that the vegan versions of Chocolate Fudge Brownie and Chunky Monkey only saves about 40-50 calories. It appears that Ben & Jerry’s created the line to stoke the non-dairy sweet tooth, not to kill extra calories.