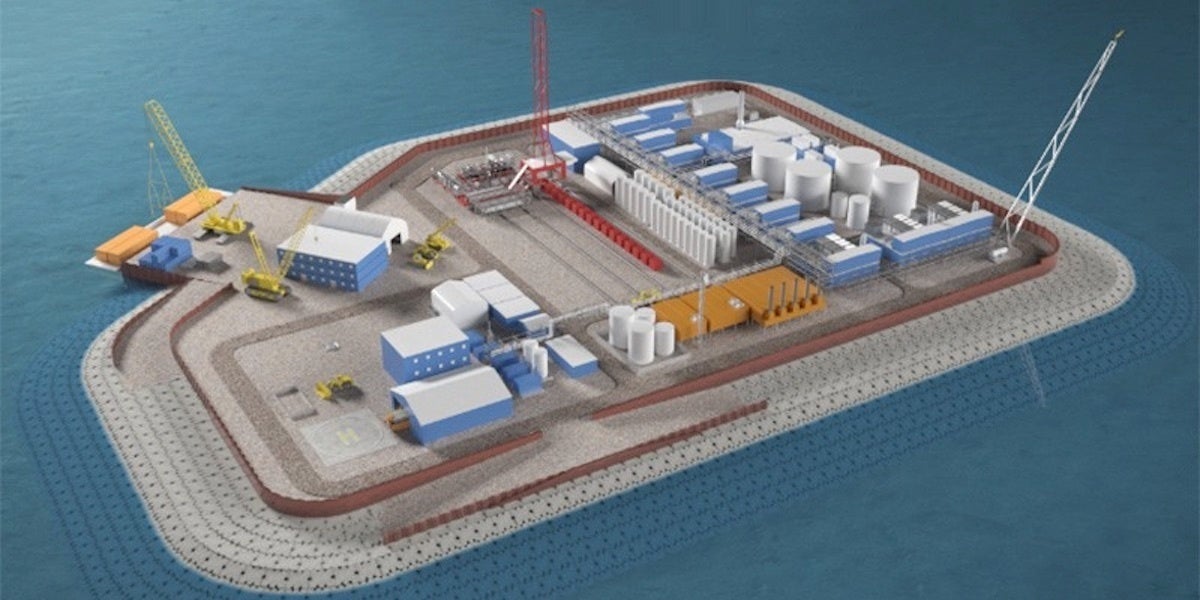 The planned Liberty Project is an artificial gravel island to allow oil drilling in the Arctic. Hilcorp / BOEM

Hilcorp Alaska received the green light from the Interior Department in October to build the Liberty Project, a nine-acre artificial drilling island and 5.6-mile underwater pipeline, which environmentalists warn could risk oil spills in the ecologically sensitive area, threaten Arctic communities and put local wildlife including polar bears at risk.

In the lawsuit filed Monday, the Center for Biological Diversity, Friends of the Earth, Greenpeace, Defenders of Wildlife and Pacific Environment—all represented by the environmental law nonprofit Earthjustice—claim the administration’s approval violated federal laws and ignores the causes and effects of climate change.

“We can’t let this reckless administration open the Arctic to offshore oil drilling. It threatens Arctic wildlife and communities and will only make climate chaos worse around the world,” said Kristen Monsell, oceans legal director with the Center for Biological Diversity in a press release. “Liberty is the bad step down a very dangerous path. An oil spill in the Arctic would be impossible to clean up in a region already stressed by climate change.”

The Arctic is warming at twice the rate of anywhere else on Earth, and the region’s air temperatures in the past five years between 2014-2018 have exceeded all previous records since 1900, government scientists warned in a report earlier this month.

Ironically, the Liberty Project has already been delayed because of the effects of climate change. The region’s unusual warmth has resulted in unstable land-fast sea ice, meaning that the ice simply isn’t thick enough to transport construction materials.

Furthermore, when the administration approved the Liberty Project, it did not “account for climate-change impacts already happening in the Arctic like permafrost melt, sea-ice melt and increasing storms that make this an exceedingly dangerous prospect and increase the potential for oil spills,” said Rebecca Noblin, staff attorney with Earthjustice, in the release.

“This danger is even more worrisome given Hilcorp’s appalling record of safety and environmental violations,” Kevin Harun, Arctic program director at Pacific Environment, noted in the release.

Last year, Hilcorp struggled to fix a natural gas leak from its underwater pipeline in Alaska’s Cook Inlet. For nearly four months, the ruptured pipeline released roughly 200,000 cubic feet of methane a day into the inlet.

Additionally, Hilcorp has been the most heavily fined oil company in Alaska in recent years, with state regulators writing “disregard for regulatory compliance is endemic to Hilcorp’s approach to its Alaska operations.”

“In a rush to drill for oil in Alaska’s pristine Arctic coastlines, Donald Trump is flouting the law and endangering some of the most delicate coastlines in the world,” said Marcie Keever, legal director with Friends of the Earth, in the press release. “This project is just one in a series of giveaways to oil companies looking to enrich their CEOs and investors on America’s public lands and waters. Drilling for new oil off our shorelines and on our public lands, especially in the Arctic, puts the health of our children and their future on this planet into jeopardy.”