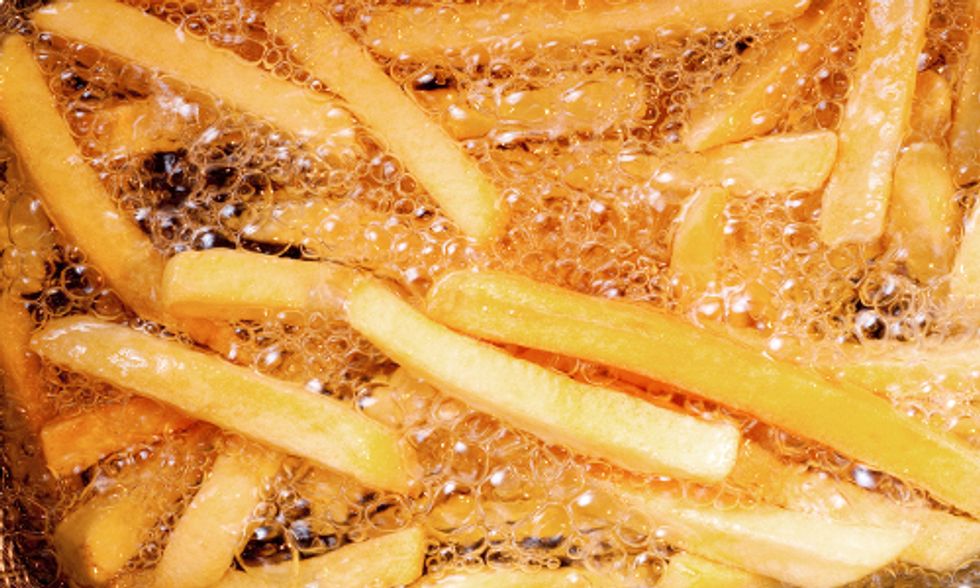 On Friday, the U.S. Department of Agriculture's Animal and Plant Health Inspection Service (APHIS) approved a new genetically modified (GMO) potato, engineered for reduced bruising and browning, and lowered production of acrylamide, a neurotoxicant and potential carcinogen that forms when potatoes are prepared at the extremely high heat required by frying and potato chip production.

New GMO French fries might contain less of a possible carcinogen, but they're still not a health food.
Photo credit: Shutterstock

APHIS decided that the potatoes are unlikely to present a risk requiring regulation, although, according to its own document, during its public comment period earlier this year, "The majority of comments expressed general opposition to APHIS making a determination of nonregulated status of GE organisms. Issues raised during the comment period included concerns regarding the potential transfer of genes from GE to non-GE potatoes and potential health and environmental impacts."

The potato, called the Innate potato, was developed by the Boise, Idaho-based J.R. Simplot Company, which applied for the permit last year after three years of field trials. Simplot, one of the country's largest privately held agribusinesses which virtually invented the frozen French fry, has been a major supplier of those French fries to McDonald's since the late ’60s. It now supplies more than half the French fries the chain buys.

While the environmental benefits of reduced bruising leading to less crop waste are being touted, some environmental groups decried the decision. Doug Gurian-Sherman, senior scientist and director of sustainable agriculture at the Center for Food Safety raised issues about the particular technology, which works not by introducing foreign organisms but by inserting other types of potato DNA to silence the host potato's RNA-based control mechanisms, such as the one that produces browning.

"We simply don’t know enough about RNA interference technology to determine whether GE crops developed with it are safe for people and the environment," said Gurian-Sherman. "If this is an attempt to give crop biotechnology a more benign face, all it has really done is expose the inadequacies of the U.S. regulation of GE crops. These approvals are riddled with holes and are extremely worrisome."

Elizabeth Kucinich, policy director at the Center for Food Safety, added that promoting the reduction of a possible carcinogen also found in many other foods could send the message that frozen French fries are now less bad for you.

“In light of the obesity crisis, there has been an important national push to discourage children and adults from eating large quantities of fried foods like French fries or chips," said Kucinich. "In creating the false illusion that fried potatoes are now healthy, the Simplot potato sends the absolute opposite message. Claims of health benefits by USDA and Simplot are short sighted, misleading, and in the light of the science, could actually be potentially dangerous.”

In any case, don't expect to see them at your local McDonald's next month, it will take a couple of years before enough crop can be harvested to supply a major chain like McDonald's, assuming McDonald's embraces them. It hasn't made a public statement yet. And the potatoes won't be going to China's 2,000 McDonald's outlets, which don't buy French fries from Simplot but do use their hash browns. "McDonald's China does not use genetically modified potatoes," the public relations department of McDonald's China told the Global Times Monday. "The potatoes that McDonald's China uses are in line with the national laws and regulations." Those regulations ban the use of GMO foods.

It's not the first attempt to introduce a GMO potato. Monsanto developed a pest-resistant potato called NewLeaf, which it introduced in 1995. It phased them out in 2001 when farmers were unwilling to pay a premium price for the seed with a glut of potatoes on the market. And at the time, with the fight over the safety of GMO foods starting to heat up, McDonald's told its suppliers to stop using the potato, which surely didn't help sales. Monsanto withdrew from the market to focus on more lucrative GMO crops like corn and soy beans. At that time, a Monsanto spokesperson told the Wall Street Journal, "Potatoes are a great niche product. We hope some day we can come back to it."