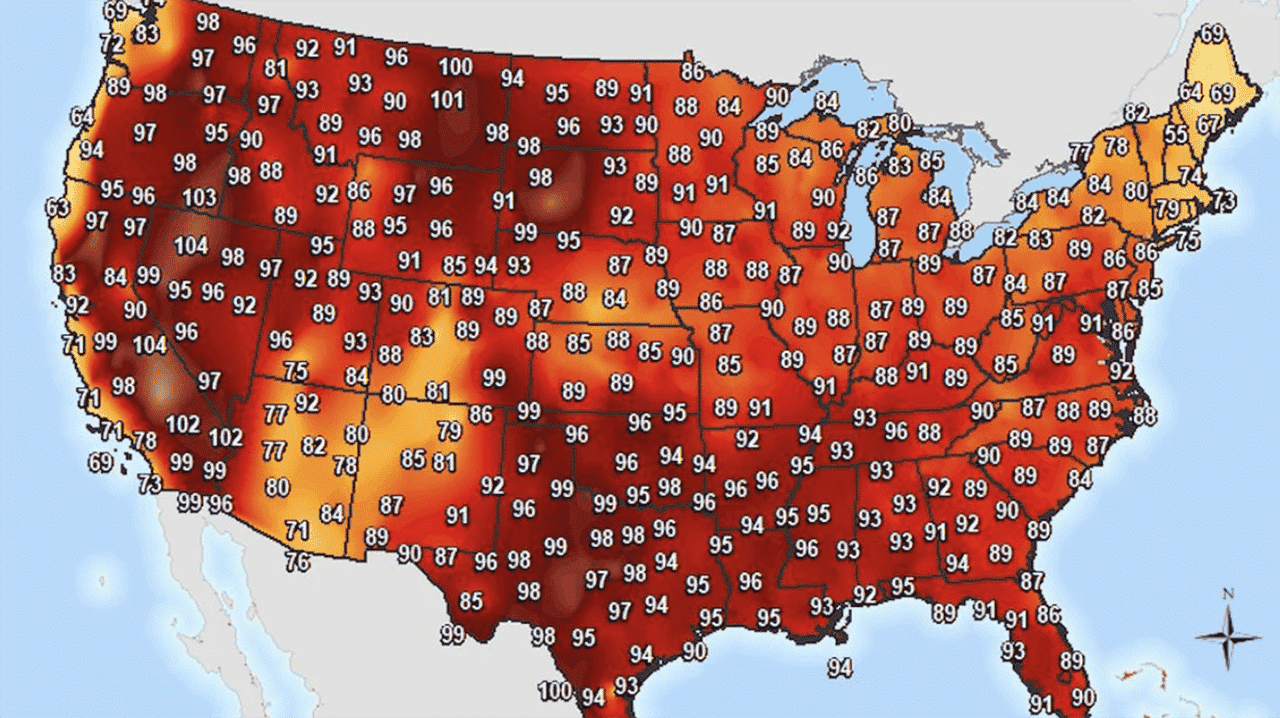 As 79 large fires continue to rage in 12 U.S. states, the country entered yet another heat wave on Monday.

While most of this summer’s high heat has been concentrated over the country’s West, high temperatures this week are predicted to bake much of the country. On Monday, 35 million people between the Pacific Northwest and Louisiana’s Gulf Coast were already under heat alerts, CNN reported.

“Most of the Lower-48 will observe above normal temperatures through at least the first half of the week with a heat wave building into the Northern Plains,” the National Weather Service (NWS) Weather Prediction Center tweeted Saturday.

Most of the Lower-48 will observe above normal temperatures through at least the first half of the week with a heat wave building into the Northern Plains. Meanwhile, the Southwest and portions of the Northeast will be below average thanks to widespread cloud cover. pic.twitter.com/ZLrwlA0eBx

The highest temperatures are expected to begin in Idaho and eastern Oregon at the start of the week, then move gradually east and south through states including Montana, Wyoming, the Dakotas, Minnesota, Iowa, Kansas, Nebraska, Texas, Louisiana, Oklahoma, Arkansas, Mississippi and Tennessee, according to CNN. All told, at least 30 million people are likely to see temperatures of 100 degrees Fahrenheit or higher by the end of the week, according to Axios. Further, 17 states were under heat warnings or advisories Tuesday.

The immediate cause of the heat wave is a heat dome, as Jeanine Santucci explained for USA TODAY:

A heat dome is the result of a strong change in ocean temperatures from west to east in the tropical Pacific Ocean during the preceding winter, according to the National Ocean Service. The warm air coming from the west part of the Pacific Ocean gets trapped in the jet stream as it approaches land. When that hot air arrives over land, the atmosphere traps it. Winds can move the heat dome around.

Events like these are usually a combination of short-term weather effects and the longer term impacts of the climate crisis, Santucci reported. Climate change caused by the burning of fossil fuels is making heat waves longer, more frequent and more intense, Axios pointed out.

The latest heat wave is now the fifth distinct extreme heat event the U.S. has experienced this summer, and follows the country’s hottest June on record. It therefore risks worsening the effects of previous high temperatures, including the wildfires burning in the West.

Idaho, for example, currently has the most wildfires of any U.S. state, with 23 now burning more than 192,000 acres, according to CNN. The state was expected to see triple digit temperatures on Monday, but was expected to cool slightly on Tuesday.

In Montana, however, which has the nation’s second-highest number of large fires, temperatures could reach as high as 110 degrees Fahrenheit on Tuesday. In the eastern part of the state, humidity is expected to be as low as 10 percent and breezy conditions could combine with dryness and high heat to increase fire risk.

Excessive #HeatWarning in effect for Monday and Tuesday. Temperatures on Tuesday could reach 110 degrees in some locations. Cooler temperatures arrive for the later half of the week. #MTwx #WYwx #StayCool #BeatTheHeat pic.twitter.com/rQZamA9AEt

While heat raises fire risk, smoke from fires already burning could actually have a cooling effect in Idaho and Montana, according to CNN and Axios. However, the heat dome will also trap smoke, worsening air quality, NWS Weather Prediction Center said.

The high temperatures are expected to last through the weekend and into next week, CNN reported.