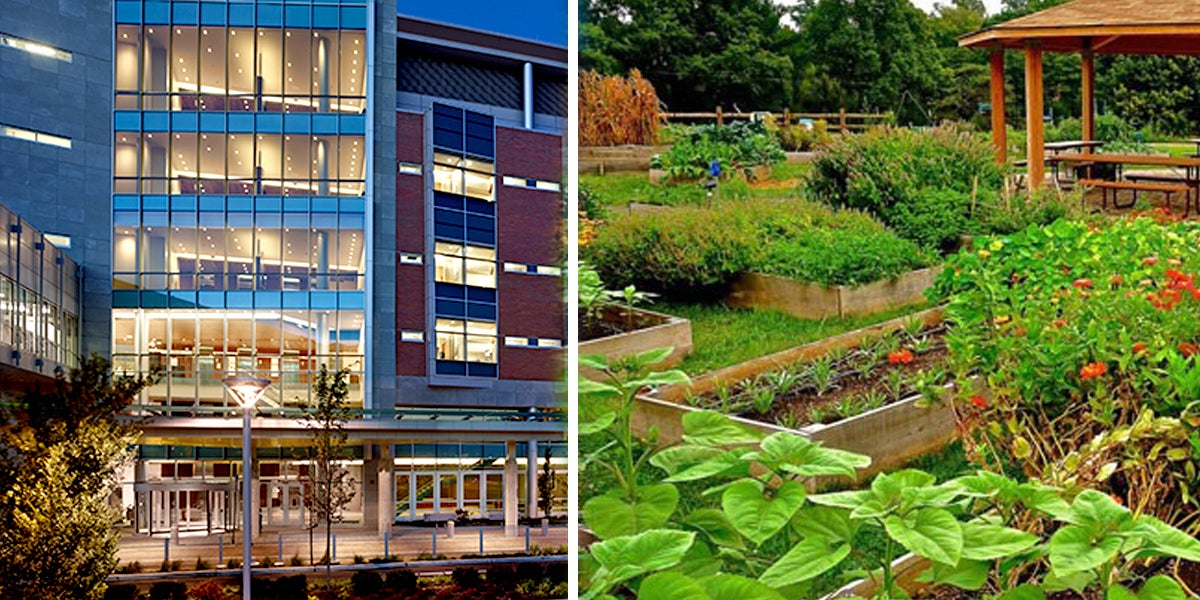 Five years ago, when Lankenau Medical Center was confronted with evidence that it was serving the unhealthiest county in Pennsylvania, the hospital decided to embrace the findings with an unconventional approach: building a half-acre organic farm on its campus to provide fresh produce to patients. 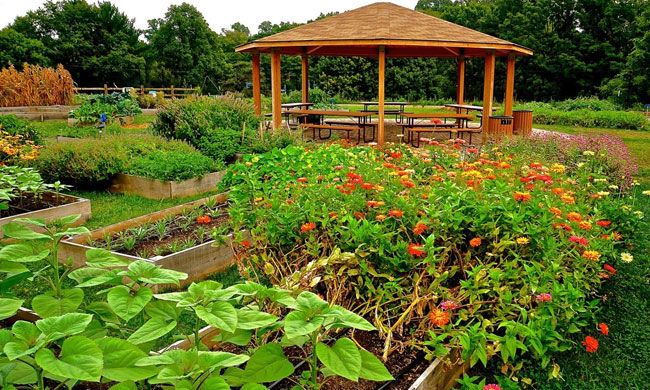 The teaching and research hospital just outside Philadelphia was in the midst of its own patient health needs assessment in 2011 when the Robert Wood Johnson Foundation released findings about health outcomes in Pennsylvania counties. Lankenau is officially located within Montgomery County, one of the state’s healthiest, taking into account factors including obesity rates and access to reliable sources of food. But the campus is adjacent to and receives many patients from Philadelphia County, ranked the least healthy of all 67 counties.

“That was really telling because it showed that we were serving a really diverse patient population,” said Chinwe Onyekere, associate administrator at Lankenau, of the study’s revelations. The findings showed that the hospital’s patients had widely varying access to healthy food and nutritional knowledge.

With more than 1.5 million people, Philadelphia is one of the largest cities in the country and consistently named one of the unhealthiest. In 2010, 32 percent of its adults and about 25 percent of its children were obese. The same year, 13 percent of the city’s adults had diabetes, and Philadelphia County ranked highest among the country’s largest counties for chronic illnesses like cardiovascular disease and hypertension.

Across the nation, about half of Americans are estimated to have some kind of chronic disease stemming from health risks including lack of exercise, obesity, smoking and unhealthy eating. Treatment for these illnesses, which include asthma, heart disease or diabetes, has accounted for more than 75 percent of hospital admissions and physician visits in recent years.

This has caused some hospitals to look for ways to address health needs before a patient’s condition has deteriorated so much that a hospital visit is necessary. At Lankenau, that meant providing its patients with a source of healthy food. 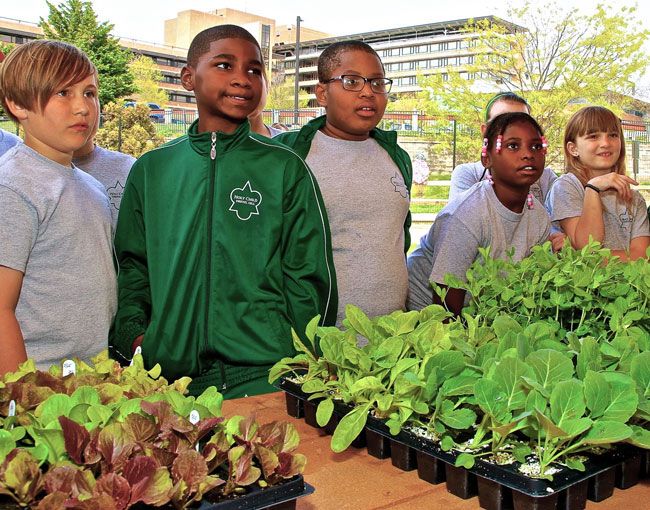 Because the doctors, nurses and other staff were not farming experts, the hospital paired with Greener Partners, a nonprofit advocate for local food systems in Pennsylvania, to build and maintain what would become the Deaver Wellness Farm. Onyekere, who heads community needs programs for the hospital, oversees the project.

Since the farm’s launch in 2015, it has provided more than 4,000 pounds of organic food to hospital patients at no cost. The produce is used for educational demonstrations and served in the hospital cafeteria. From its community needs assessment, Lankenau’s staff learned that many of its patients, especially from West Philadelphia, lacked access to and nutritional knowledge of fruits and vegetables. So Lankenau now facilitates pop-up markets in internal medicine and the OBGYN practice wards.

While patients wait for appointments, medical assistants bring in fresh kale, broccoli, tomatoes, eggplant, arugula and other produce for them to select. The hospital also provides recipes, and, during an appointment, physicians use the produce to show how a patient can make healthier lifestyle choices.

In the Lankenau waiting rooms, hospital employees lead nutrition courses and food demonstrations. An employee might bring in the materials for a carrot salad, discuss the nutritional significance of each of its ingredients and then chop and assemble the salad in front of patients. Afterward, patients are given the ingredients and a recipe to try at home.

A young visitor gets a taste of what we do at the #DeaverWellnessFarm at #LankenauMedicalCenter. pic.twitter.com/jTSbIAs4B3

For years before the farm, health educators employed by the hospital ran roughly 14 programs in a health education center with two classrooms in the middle of Lankenau’s facilities. Seven thousand to 10,000 students from kindergarten through 12th grade took courses each year in physical health, like nutrition, as well as social health issues, like bullying and harassment.

Now, part of the mission of the farm is to serve as what Onyekere calls a “learning laboratory” for classes about healthy eating, and to create a hands-on experience for students to learn about nutrition, gardening and building healthy behaviors.

Outside the hospital, Lankenau—in partnership with The Food Trust and the Philadelphia Department of Public Health—incentivizes healthy food buying by providing coupons called Philly Food Bucks. These coupons for fresh fruits and vegetables are valid at more than 30 farmers markets and are given to patients who express the desire for better access to healthy foods.

“From the moment the patient walks into the door to the moment they leave the office, that whole experience is focused on improving their health,” Onyekere said.

Drew Harris, director of health policy and population health at Thomas Jefferson University’s College of Population Health, said that only recently have health providers begun to take accountability for addressing food insecurity among their patients. A former practicing doctor with a specialty in diabetes, he remembers having a very different philosophy about chronic diseases and overall patient health.

“Like many doctors, I probably blamed the patients for not getting well,” he said. “I didn’t really ask the question: Did they have the ability to follow the diet they were supposed to follow as a diabetic?”

Harris eventually became interested in the wider issues that led to chronic illness. While some patients are never taught health literacy, he said, for others “challenges in life can intervene.”

“Not having food security—not knowing where your next meal is going to come from or whether you can purchase everything you need to purchase when you need to—is a major challenge,” he said.

What’s more, the tools for patient treatment taught in the medical profession have been so focused on prescriptions and procedures, Harris said, that doctors do not always learn the importance of stressing to their patients things like how to create a balanced diet and where to access those foods—knowledge that could keep people out of the hospital in the first place.

Though food insecurity is not a new issue, he thinks medical education is just starting to take a more holistic approach.

“There’s a much stronger incentive to worry about why patients are not getting better and what we can do to avoid them getting sick in the first place, and a lot of it has to do with their social environment, their access to healthy food,” he said.

Still, Harris stresses the need to pressure health providers. “Holding the medical profession more accountable for results—the quality of the care they provide—is going to make a difference,” he said.

Onyekere estimates that Lankenau has provided farm produce to about 400 patients so far, and the hospital is about to launch a survey of patients to better understand the program’s impact. Although she said patients have expressed that the farm is making a difference and raising awareness of how to incorporate healthy choices into daily life, the research survey will be a valuable resource for other health providers considering similar initiatives.

Going forward, Lankenau plans to grow the farm with four additional raised beds. Though this year’s yield far exceeded initial expectations, staff took that as a sign that it can further increase production. Onyekere said Lankenau is also looking to donate its food to additional community partners, like local food banks.

Lankenau is not the nation’s only hospital-run farm. Others include St. Joseph Mercy Ann Arbor and Henry Ford West Bloomfield Hospital, both in Michigan; and St. Luke’s University Health Network in Pennsylvania. But Onyekere is aware of none that have so extensively incorporated their own organic food into hospital life.

If America is to confront its growing chronic health epidemic, that integration is key, and, as these hospitals show, is already happening. “We’re beginning to move from the patient outward to look more at the neighborhood and the larger environment in which that patient lives,” Harris said.