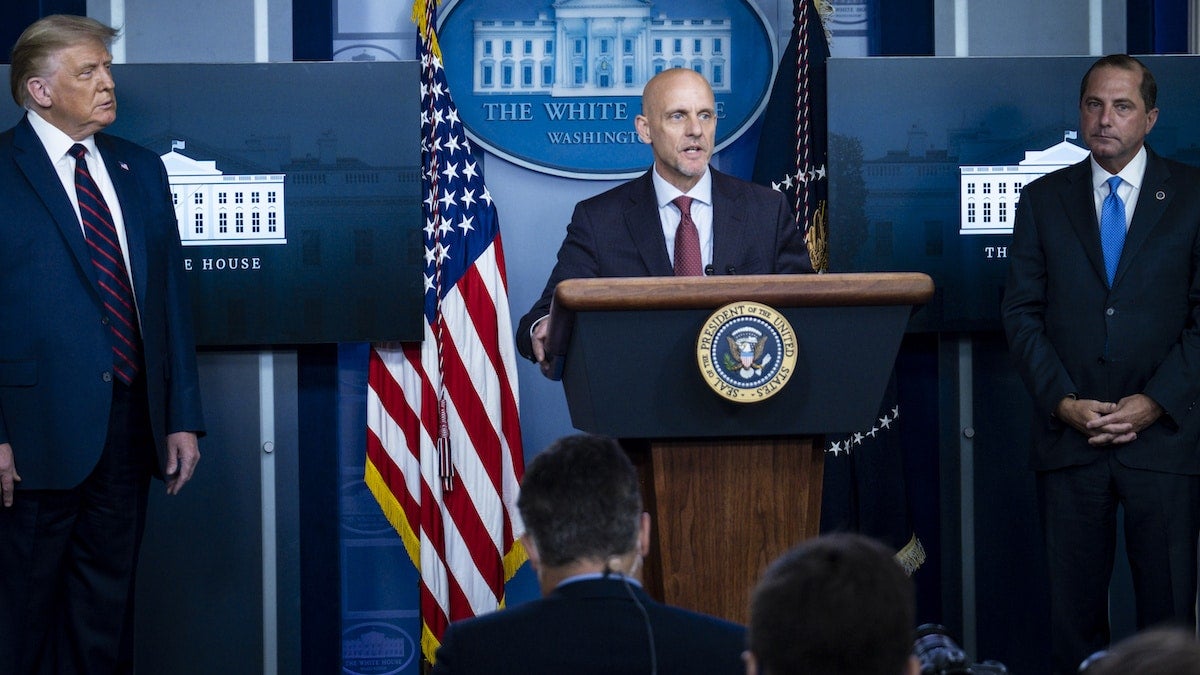 Trump and Health and Human Services Secretary Alex Azar look on as FDA Commissioner Stephen Hahn addresses the media during a press conference at the White House on Aug. 23, 2020 in Washington, DC. Pete Marovich / Getty Images

In a news conference on Sunday, President Trump alongside Stephen Hahn, the head of the Food and Drug Administration (FDA), and Alex Azar, the secretary for Health and Human Services (HHS), touted the efficacy of blood plasma in treating COVID-19 as they announced its approval for a treatment.

And yet, the data they cited was misrepresented and built on a shaky foundation, forcing Hahn to walk back his assertion that it was an effective treatment, a rare about-face for an agency that is supposed to be an anchor of non-partisan public trust, according to Bloomberg.

In fact, just days before the FDA approved the treatment, a group of top health officials that included Anthony Fauci and Francis Collins said the emerging data on blood plasma treatments was too weak to justify its approval. Yet President Trump, who had also accused the FDA as being part of the “deep state” that was delaying treatments until after the election, touted blood plasma treatment as reducing deaths by 35 percent.

The problem is, nobody knows where that number came from. As The New York Times reported, it was not found in the FDA’s official authorization letter, nor a 17-page memo written by FDA scientists, nor in the Mayo Clinic analysis cited by the administration.

“For the first time ever, I feel like official people in communications and people at the FDA grossly misrepresented data about a therapy,” said Dr. Walid Gellad, who leads the Center for Pharmaceutical Policy and Prescribing at the University of Pittsburgh, to The New York Times.

In an interview with new agencies, one of the Mayo Clinic study’s main authors, Dr. Arturo Casadevall of Johns Hopkins University in Baltimore, expressed confusion. “Do I know where the 35 percent comes from? No,” he said, as The New York Times reported.

“That was not the way that I would have worded it,” he added, as Bloomberg reported. “I hope they will issue a clarification.”

“You need to correct the 35 lives saved per 100 sick with COVID-19 so people understand that was absolutely wrong, Steve,” wrote Eric Topol, director of the Scripps Research Translational Institute in California, on Twitter, as Bloomberg reported. “That there is no evidence to support that. That there is no evidence at this juncture to support *any* survival benefit.”

As the criticism of the 35 percent number piled up, Hahn listened. He acknowledged its validity last night in a tweet.

“I have been criticized for remarks I made Sunday night about the benefits of convalescent plasma,” Hahn wrote. “The criticism is entirely justified. What I should have said better is that the data show a relative risk reduction not an absolute risk reduction.”

The treatment in question, convalescent blood plasma therapy, uses antibody-rich plasma from people who have recovered from the disease to help ramp up the immunity of sick people so they can develop their own antibodies. However, there are few randomized controlled trials to demonstrate its efficacy, according to STAT News.

“Investigators have had challenges enrolling patients to begin with, and this announcement will make it even harder, if not impossible,” said Dr. Howard Koh, a professor at the Harvard T.H. Chan School of Public Health who was assistant secretary for health in the Department of Health and Human Services in the administration of President Barack Obama, to NBC News. “It’s a disservice, actually.”

According to Bloomberg, the data simply shows that a higher dose of blood plasma is more effective than a lower dose. While there are promising results, the extensive research has not yet shown that blood plasma therapy is far superior to a placebo.

“Until we have a randomized controlled trial, we don’t know definitively,” Casadevall said.