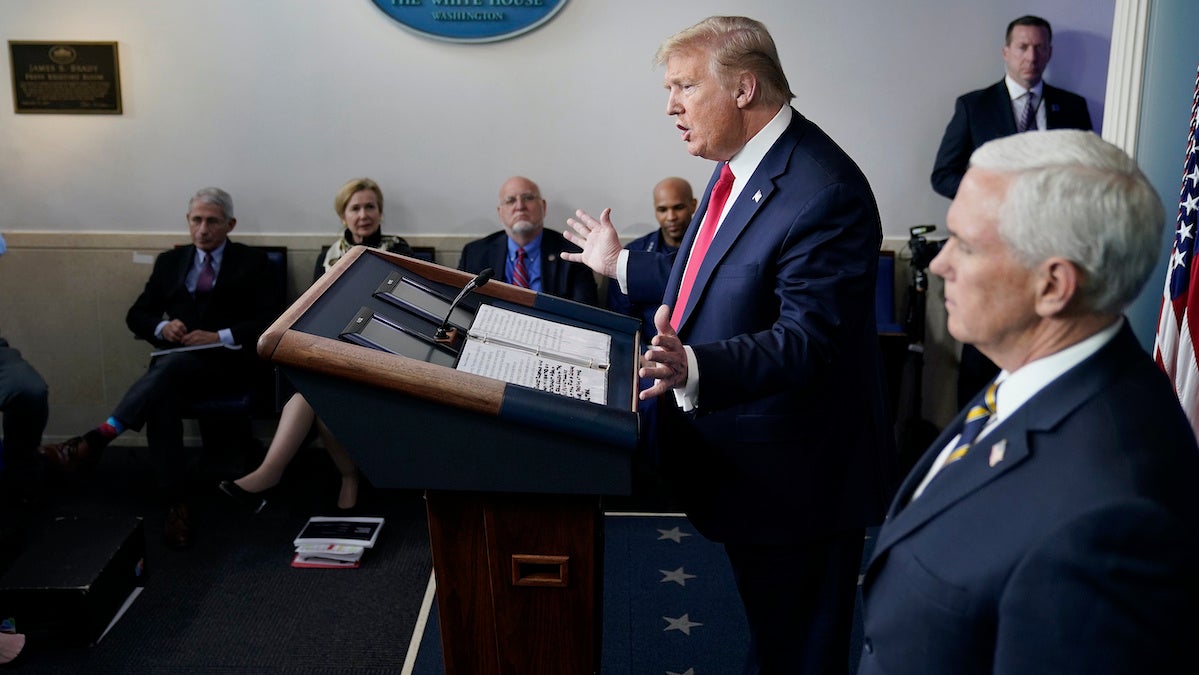 Trump speaks during the daily briefing of the coronavirus task force at the White House on April 22, 2020 in Washington, DC. Drew Angerer / Getty Images

Update, May 6, 12:30 PM: President Donald Trump on Wednesday said the White House coronavirus task force would continue “indefinitely” a day after both he and Vice President Mike Pence confirmed it would wind down, NBC News reported. “[T]he Task Force will continue on indefinitely with its focus on SAFETY & OPENING UP OUR COUNTRY AGAIN. We may add or subtract people,” Trump tweeted. He said it was also going to focus on vaccines and treatment going forward. His reversal came after initial reports of the task force’s phaseout were met with “outrage and dismay,” The Guardian reported.

Original Story:
The Trump administration will wind down its coronavirus task force to focus on reopening the economy, despite evidence that the virus still poses a major threat to public health.

The news came the day after The New York Times leaked an administration document showing the death toll could jump to 3,000 a day by June 1 and an influential University of Washington model revised its projected death toll by August from around 60,000 to more than 134,000. Some critics have accused the administration of caring more about the economy, and reelection, than preserving American lives.

“They’ve decided in a very utilitarian kind of way that the political damage from a collapsed economy is greater than the political damage from losing as many as 90,000 more Americans just in June,” former Republican strategist Rick Wilson told The Guardian. “We’re witnessing the full-scale application of a kind of grisly realpolitik that is a clear willingness to trade lives for the Dow Jones.”

Vice President Mike Pence, who has led the task force since February, told reporters Tuesday that it would probably wrap up around the end of May and that public health duties would shift back to the relevant federal agencies.

“It really is all a reflection of the tremendous progress we’ve made as a country,” Pence told reporters at the White House, as The New York Times reported.

“Members of the task force will continue providing input, though the group will not be meeting as regularly as the focus changes toward vaccines, therapeutics, testing, and ultimately reopening the economy,” one senior administration official told CNN. “Keep in mind the task force was always a temporary arrangement. Health experts will continue providing input even while not meeting together every day.”

The task force was first formed in January under the leadership of Department of Health and Human Services Secretary Alex Azar, who was later replaced by Pence, The New York Times explained. The influence of Birx and others was instrumental in getting the president to implement social distancing measures in March, but there had been signs of its disintegration in recent weeks. It did not meet Saturday and canceled a meeting Monday. President Donald Trump also stopped timing his media briefings to task force meetings and ceased appearing in public with task force members shortly after he floated the possibility of injecting disinfectants to cure the virus and Birx had to warn the public not to do so.

“The task force has been hampered by inconsistent messaging,” former Food and Drug Administration official and Johns Hopkins Bloomberg School of Public Health professor Dr. Joshua M. Sharfstein told The New York Times. “There were too many times when what the scientists said and what the president said were at odds.”

There is now concern that the president is ignoring scientific advice to reopen the economy. The U.S. death toll from the virus passed 70,000 Tuesday, according to Johns Hopkins University data reported by The Guardian. That is more deaths than any other country and a figure Trump once predicted would be the total U.S. death toll, The Washington Post pointed out. The U.S. now has more than 1.2 million cases, according to Johns Hopkins data as of Wednesday morning, around a third of the world total. Public health experts are warning that loosening restrictions could raise those numbers higher. The University of Washington model said its higher projected death toll was partly due to the rollback of social distancing measures in many states, and a separate Columbia University model released Tuesday showed that even a small uptick in contact between people would raise infections, hospitalizations and deaths, The Washington Post reported.

Trump acknowledged to reporters Tuesday that some medical experts would like to see lockdown orders extended, but said it was not possible.

“We can’t keep our country closed for the next five years,” he said, according to NPR.

He also acknowledged there would be a toll.

Fauci, speaking on CNN Monday evening, warned that reopening the economy too soon would lead to an increase in cases, and put the question faced by the administration more starkly.

“How many deaths and how much suffering are you willing to accept to get back to what you want to be some form of normality sooner rather than later?” he asked, as The Guardian reported.