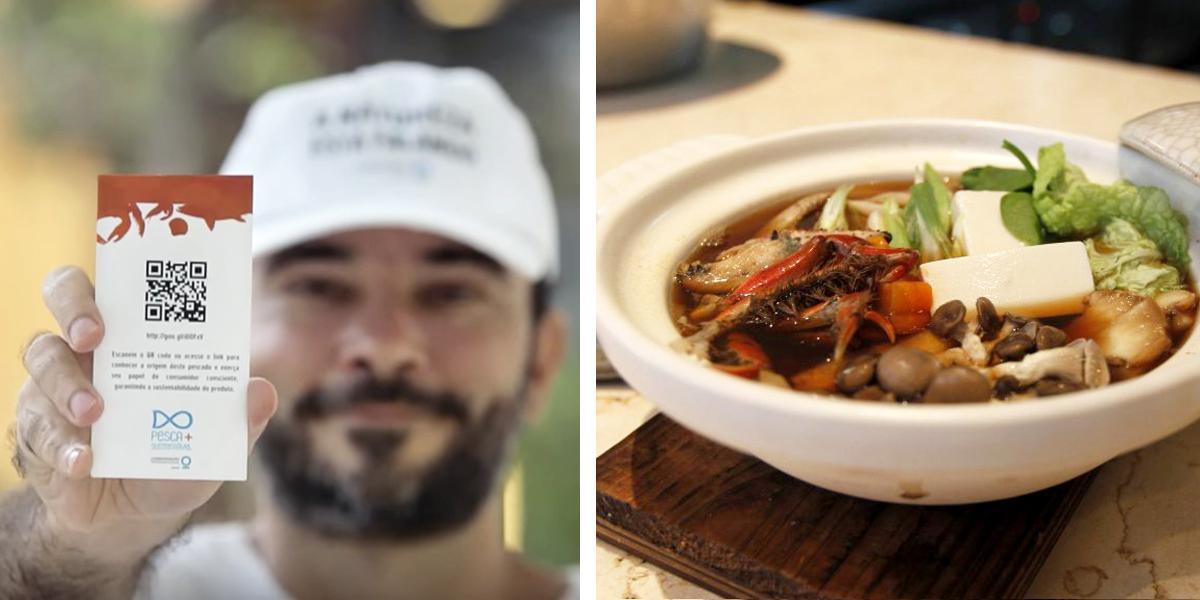 Editor’s note: The global seafood chain can be as murky as the ocean’s depths—in fact, one in five pieces of seafood is falsely labeled. In Brazil, Conservation International is pioneering a smartphone-friendly tool that traces seafood from ocean to plate, giving consumers the power to make sustainable choices with a few finger swipes.

Human Nature sat down with Guilherme Dutra, marine program director for Conservation International Brazil, to discuss the pioneering seafood traceability program, Pesca+Sustentável (in English, Fisheries+Sustainable). Winner of the 2014 Google Brazil Social Impact Challenge, this initiative brings innovative technology directly to fishing communities in Brazil to reshape the seafood chain from the water to the consumer’s plate.

Q: How does Pesca+Sustentável work?

A: Pesca+Sustentável is a traceability system based on QR codes. The QR code is printed on a piece of paper that accompanies a restaurant menu. Customers open the QR app on their smartphone and scan the code, which brings them to the program website to find out more about where their seafood came from. This way, the conscious consumer can easily choose healthy and sustainable seafood that comes from local fishing communities, benefiting the whole seafood chain. 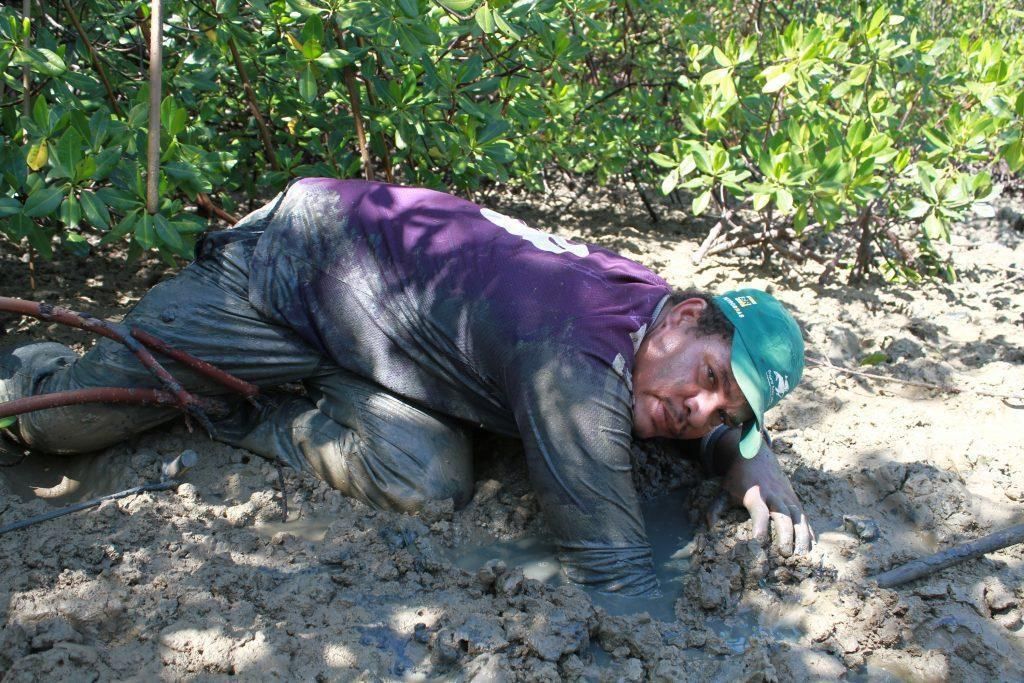 A fisher in Brazil catches crabs in the mud around mangrove roots. This is the first step in the seafood chain. Conservation International / Priscila Steffen

A: At coastal community fisheries in Brazil, Conservation International is pioneering sustainable catch of a type of crab called caranguejo-uçá, which are caught by hand in the mud around coastal mangrove forests. To sustain healthy populations of these crabs, local fishers agree to catch them when they’re a certain size and not during breeding season. Once caught, the crabs are transported to suppliers and restaurants. So far, our main restaurant partner is in Belém, the capital city of the northern state of Pará.

Q: Why is “fish to plate” transparency important?

A: Today, a large portion of the seafood chain is illegally or unsustainably caught. One in five seafood labels is fake! The market is focused on who can catch more—which is unhealthy and unsustainable for fishers, fish and marine ecosystems. The market should be focused on quality: simply put, who fishes “better,” with “better” meaning “using sustainable methods that are good for consumers and the environment.” Our choices as consumers are critical for ocean conservation, and we must be sure about the sources of seafood we eat. Pesca+Sustentável offers consumers a simple, straightforward way to create positive change—with their wallets.

Q: How does Pesca+Sustentável advance other conservation efforts?

A: Fishermen want—and need—to protect the mangroves where the crabs live, so they can continue to fish them and sustain their families; about 10,000 families depend on crab. Transitional areas between ocean and land such as mangrove forests not only provide food for communities, but they serve as buffers from tropical storms and can store as much as 10 times the amount of carbon as the same area of land-based forest. The mangroves in northern Brazil are the largest continuous portion of this ecosystem on the whole planet, occupying an area bigger than Puerto Rico. Pesca+Sustentável trains fishers—many of whom can’t read or write—to protect the environment in order to guarantee lasting fisheries, explaining the connection between overfishing and the loss of natural resources and livelihoods. 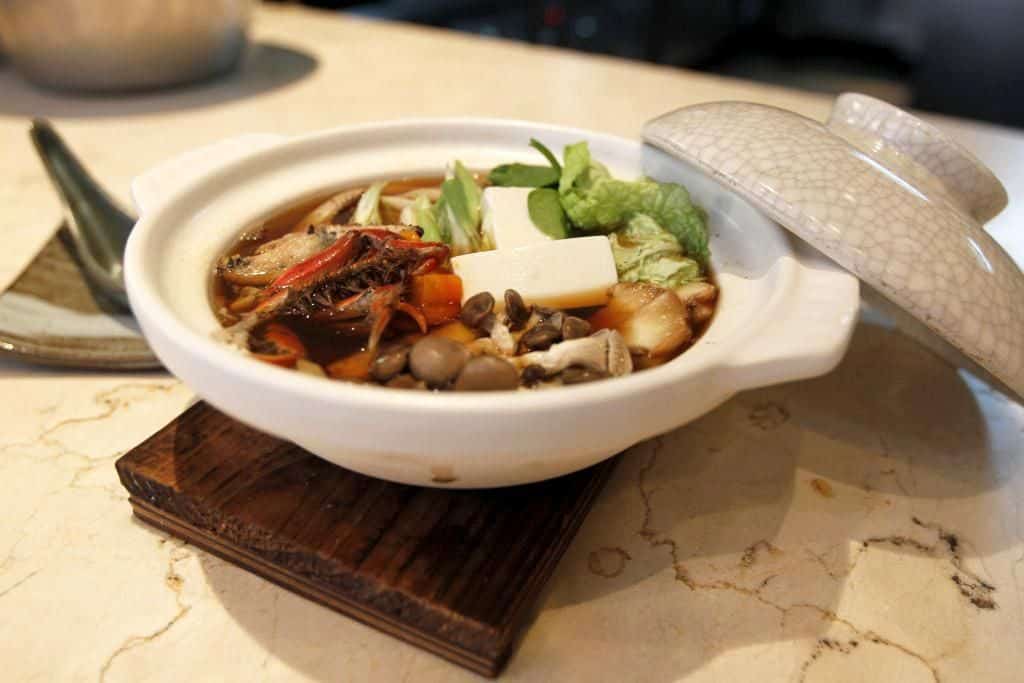 Q: What efforts are underway to expand Pesca+Sustentável?

A: Our goal is to make this system available for the 25 marine extractive reserves in Brazil, which would help 6,000 families who depend on small-scale fishers and would benefit directly. We are also working with Conservation International Colombia to bring this traceability system to their EcoGourmet fisheries, which also connects local fishers to suppliers and restaurants. Conservation International programs in Colombia have prevented overfishing while preserving livelihoods, primarily by using less harmful fishing techniques and having restaurants pay more for sustainably caught fish. The Pesca+Sustentável traceability approach can work for a number of other sustainable products, and many local communities can benefit from greater transparency.

Watch the video: See what “ocean to plate” transparency looks like.