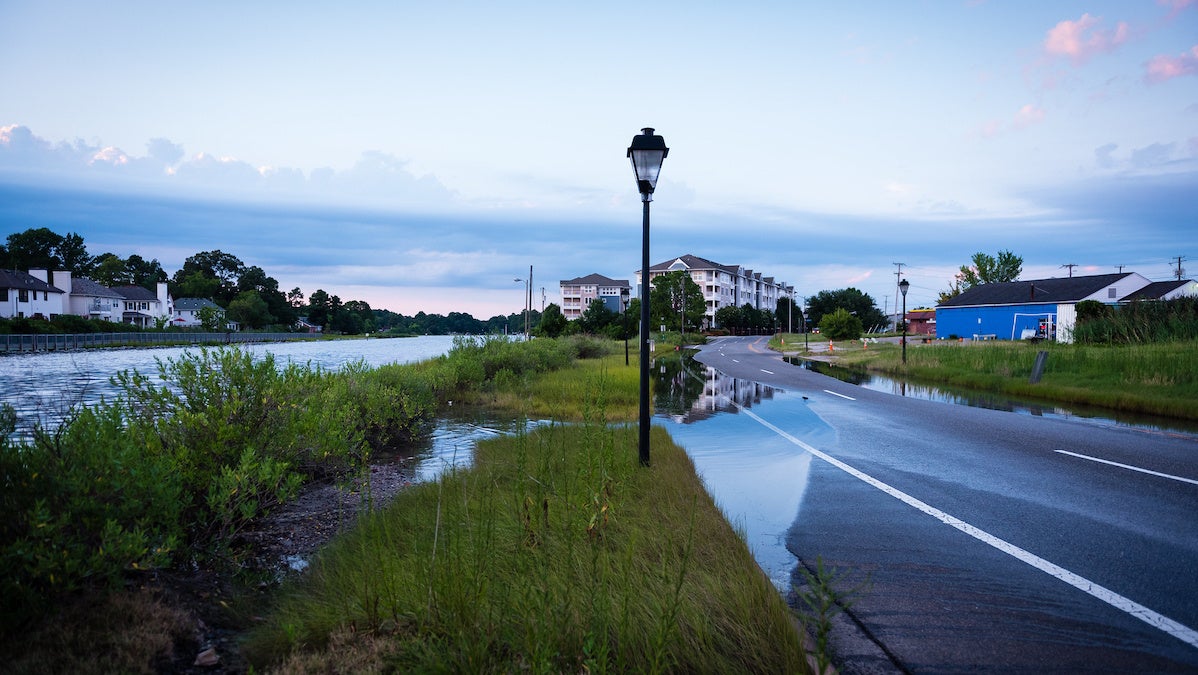 Sea level rise causes water to spill over from the Lafayette River onto Llewellyn Ave in Norfolk, Virginia just after high tide on Aug. 5, 2017. This road floods often, even when there is no rain. Skyler Ballard / Chesapeake Bay Program

The Texan city of Houston is about to grow in unexpected ways, thanks to the rising tides. So will Dallas. Real estate agents in Atlanta, Georgia; Denver, Colorado; and Las Vegas, Nevada could expect to do roaring business.

The inland counties around Los Angeles, and close to New Orleans in Louisiana, will suddenly get a little more crowded. And from Boston in the north-east to the tip of Florida, Americans will be on the move.

That is because an estimated 13 million U.S. citizens could some time in this century become climate refugees, driven from their seaside homes by sea level rise of possibly 1.8 meters (approximately 5.9 feet), according to new research.

And they will have to move home in a poorer economic climate, worldwide. If governments and city authorities do not take the right steps, sea level rise could erode 4% of the global annual economy, says a separate study. That is, coast-dwellers could witness not just their towns and even cities washed away: they could see their prosperity go under as well.

Californian scientists report in the Public Library of Science journal PLOS One that they used machine learning techniques – in effect, artificial intelligence systems – to calculate what is most likely to happen as U.S. citizens desert Delaware Bay, slip away from the cities of North and South Carolina, and flee Florida in the face of rising sea levels, coastal flooding and increasingly catastrophic windstorms.

And by 2100, at least 13.1 million people could be living on land likely to be inundated if sea levels rise by 1.8 meters. Except that they won’t: they will have already seen the future and moved away from it, to some settlement well away from the rising tides.

Those who might otherwise have purchased their abandoned seaside houses will be looking for somewhere safer and adding to the pressure on the housing market.

“Sea level rise will affect every county in the United States,” said Bistra Dilkina of the University of Southern California at Irvine, a computer scientist who worked with engineers to model the human response to the future.

She and her colleagues started from patterns of movement that began with Hurricane Katrina, in 2004, and Hurricane Rita a year later, both in Louisiana. They then let the algorithms take over the challenge of guessing what American families and businesses are most likely to do as the tides begin to flood the high streets.

“We hope this research will empower urban planners and local decision-makers to prepare to accept populations displaced by sea level rise. Our findings indicate that everybody should care about sea level rise, whether they live on the coast or not,” she said.

The California team’s worst-case forecasts are based on a premise that the world takes no real action to combat sea level rise, which is driven by global warming powered in turn by fossil fuel emissions into the atmosphere on an ever-increasing scale.

But in Paris in 2015, more than 190 nations did agree to act: to contain global warming to “well below” 2°C by the century’s end. So far, very few have committed to sufficient action, and the president of the U.S. has pronounced climate change a “hoax” and announced a withdrawal from the Paris agreement.

Researchers in Austria report in the journal Environmental Research Communications that they decided to consider the potential economic cost worldwide of sea level rise alone. Scientists have been trying for years to guess the cost of flood damage to come: the latest study is of the impact of sea level rise and coastal flooding upon national economies worldwide.

The scientists considered two scenarios, including one in which the world kept the promises made in Paris, and one in which it did not, and made no attempt to adapt to or mitigate climate change.

By 2050 losses in each scenario would be significant and much the same. But by 2100, the do-nothing option promised to hit the gross domestic product – an economist’s favorite measure of economic well-being – by 4%.

Europe and Japan would be significantly hit; China, India and Canada hardest of all. If the world’s richest nations actually worked to limit climate change and adapt to the challenges ahead, the impact on the economy could be limited to 1%.

“The findings of this paper demonstrate that we need to think long term while acting swiftly,” said Thomas Schinko of the International Institute for Applied Systems Analysis in Austria, who led the study.

“Macroeconomic impacts up to and beyond 2050 as a result of coastal flooding due to sea level rise – not taking into account any other climate-related impacts such as drought – are severe and increasing.

“We, as a global society, need to further co-ordinate mitigation, adaptation and climate-resilient development and consider where we build cities and situate important infrastructure.”