The Surfside Condo Collapse and Its Environmental Warning Signals 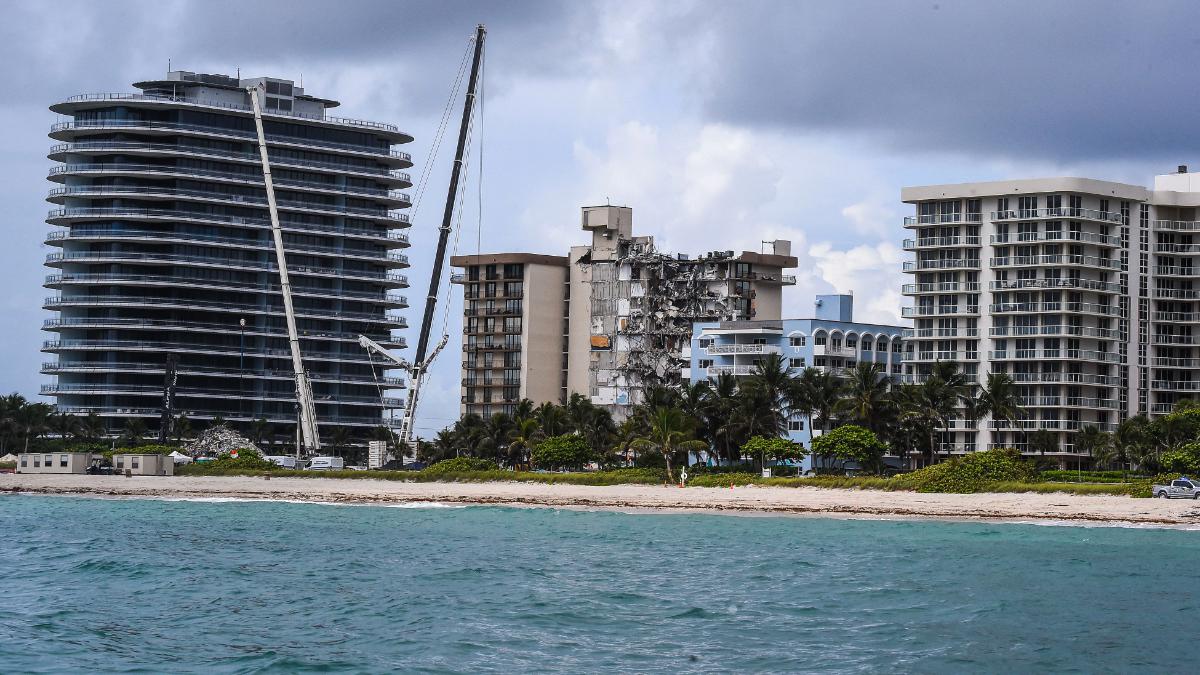 The hunt is on to find out why the Champlain Towers South in the Miami suburb of Surfside collapsed. On Friday, reports surfaced that in 2018 Frank P. Morabito, an engineer, assessed the 40-year old building and reported that he had found “major structural damage” in a concrete slab below the pool deck, near the base of the tower that collapsed.

Morabito had recommended repairs, including waterproofing below the pool deck and entrance way. These repairs had not been carried out when the collapse occurred.

Morabito also found “abundant cracking” in the columns and pillars that support the parking garage located under the pool deck.

On Saturday, Surfside mayor Charles Burkett ordered the evacuation of residents of the sister Champlain Towers North next door. It was built in 1982 of the same materials and to the same specifications.

Morabito’s 2018 report had been prepared in order to help ensure the 12-story building met a 40-year review and recertification process, which, given that the building was constructed in 1971, would have been due this year. Cost seems to have been a factor in why the repairs were not made. But as will be discussed below, environmental factors, too, might have played a role. In April of this year, the president of the Champlain Towers South Condominium Association stated that damage to the building’s basement had “gotten significantly worse” since the inspection.

On Saturday, Daniella Levine Cava, mayor of Miami-Dade, announced a 30-day audit by county agencies of all high-rise buildings that are “at the forty-year point or beyond.”

Local officials are now also arguing that the 40-year recertification process should be more comprehensive. On Friday, Surfside commissioner Eliana Salzhauer told reporters that commissioners think the review process should include underground checks. Some have argued for a review process that starts earlier, say after 30 or 35 years, given the corrosive effects of the salty ocean air and water.

Surfside Commissioner Charles Kesl told The Guardian, “I want to know if there’s underground collapses and movement, which is quite possible, and if the building has been sinking a little bit.” He added, “There have been sinkholes in the neighborhood in the past 20 years. We have a lot of powerful water movement, we’ve got rising sea levels, we’ve got a water table that’s been saturated with salt water. There’s been no geological kinds of tests. We need to figure out what’s happened and we need to do it in a somewhat timely manner.”

Scientists are not as surprised by the disaster, for numerous reasons. While none of them is necessarily the sole cause of the condo collapse, any one or a combination of them might be implicated in whatever other causes are eventually found. As Salzhauer put it, “I don’t think it’s going to be any one factor. I think it’s going to be a cumulative effect of many different things.” Aside from the corrosive effects of saltwater, the environmental factors include the following four issues: 1. barrier islands; 2. the geology, limestone; 3. land sink; and 4. sea level rise.

The Champlain Towers sit on barrier islands between Biscayne Bay and the Atlantic Ocean. Barrier islands are typically elongated islands that are separate from and parallel to the shore. To some extent, they buffer the coastline and Miami Shores and Miami from waves and erosion. But barrier islands consist mostly of sand and sediment deposits accrued by waves. Importantly, barrier islands move — either landward (transgressive) or seaward (regressive). Scientists have long noted the risks associated with building on barrier islands.

“Barrier islands are among the most dynamic large land features,” Orrin Pilkey, professor emeritus of geology at Duke University, and his co-authors write in Retreat from a Rising Sea. An expert in sea level rise who has published over three dozen books on the topic, Pilkey also focuses specifically on barrier islands. As a resident of North Carolina for almost fifty years, he has spent much time studying the Outer Banks, which come up repeatedly in his books. In A Celebration of the World’s Barrier Islands (2003), the first book devoted to the topic, Pilkey highlights why building on barrier islands is risky and thus is not advised.

Then, there is the geology: this part of Florida consists of limestone, the swiss cheese of geology. In Retreat from a Rising Sea, Pilkey and his co-authors write that “Miami Limestone formation… is the most permeable and porous formation.” It allows saltwater to intrude, and some even say it soaks saltwater up like a sponge. Building on limestone increases the risk of flooding from underground (hence the call for examining the underground region), which is then compounded by sea level rise (more about that below). This combination allows saltwater to intrude further and have more corrosive effects on building structures than if the building were to be constructed on another geologic foundation or further inland away from the rising sea levels.

Add subsidence or land sink. Subsidence can occur in areas where fluids (water or oil) have been pumped out, such as the Mississippi Delta, or where buildings have been constructed on infill (see issues with the Millennium Tower in San Francisco).

In April 2020 Simone Fiaschi and Shimon Wdowinski published a study titled “Local land subsidence in Miami Beach (FL) and Norfolk (VA) and its contribution to flooding hazard in coastal communities along the U.S. and Atlantic Coast” in the journal Ocean and Coastal Management. It highlighted how localized land subsidence or land sink combined with rising sea levels resulted in increased flood hazards in Miami Beach. The reason? The area had been built on what was previously wetlands, a strategy used to “reclaim” land in metropolitan areas. Fiaschi and Wdowinski’s study found the building had been sinking in the 1990s. The findings were based on the research Fiaschi published in his 2017 dissertation.

Fiaschi stressed in an email that the reason for the collapse of Champlain Towers was unclear, saying it was “not possible to understand which are the causes of the collapse, or if the subsidence we detected have some sort of contribution to the failure of the building.” In other words, subsidence needs to be read together with other factors.

Lastly, there is climate change induced sea level rise. The Intergovernmental Panel on Climate Change’s Fifth Assessment Report published in 2014 and the most recent one available, predicts between 5 and 26 inches (13 and 68 cm) of sea level rise by 2050 and 20-36 inches (52-98 cm) by 2100. The IPCC estimates are known to be quite conservative. The National Oceanic and Atmospheric Administration forecasts about six and a half feet. While most of Miami rests at 6′ above sea level on average, much of the city is a mere 2-3 ft. above sea level and Surfside sits at 0′ feet elevation, so King Tides and storms inundate and flood the area’s buildings with saltwater. The Union of Concerned Scientists reported that within two to three decades Miami could be flooded 237 times per year.

Instead of advocating high-rise construction near coastlines, Pilkey advocates managed retreat from coastlines at risk from sea level rise. In The Rising Seas, Pilkey and Rob Young write, “Florida is the most endangered state in the nation from sea level rise and Miami the most endangered major city.” “Siting of high-rise buildings immediately adjacent to an eroding beach is not only irresponsible,” they add, “it also prevents any flexible response to sea level rise.”

Ultimately, issues related to structural integrity will likely be found. That said, they would not disqualify environmental issues. These are not mutually exclusive but instead mutually reinforcing.

In addition to the environmental factors, building codes need to be re-examined. These include what factors are and are not included, or even the decision to allow buildings to be constructed at all so close to the water, on a barrier island, on limestone, given subsidence and sea level rise, which can be compounded by even more climate change induced factors, such as heightened risk of hurricanes both in numbers and in strength and of intensified rain storms and flooding.

Environmental journalist Jeff Goodell has written about “the dangerous combination in Miami of cheap building, salt water, and lax enforcement of building codes” as he put it in a recent tweet. In his book The Water Will Come: Rising Seas, Sinking Cities and the Remaking of the Civilized World, Goodell writes, “But the legacy of cheap building in South Florida persists. You could see it in the devastation caused by Hurricane Andrew in 1992, which flattened Homestead, a region just south of Miami: $26 billion in damage, 65 people dead, 250,000 homeless.”

Goodell added, “During my travels in South Florida, I learned that the concrete used in the much-beloved Art Deco buildings in South Beach was often mixed with salt water or salty beach sand, which can cause the rebar within the concrete to corrode over time and greatly weaken the concrete. While renovating a South Beach hotel, one architect I know discovered that the structural walls were so weak that you could practically knock them down with a hammer.”

When Goodell interviewed an electrical engineer about building codes, the engineer replied, “There was no code! If there was, nobody paid any attention to it. Your job was to do the work quick, and do the work cheap. In Miami Beach, nobody was thinking about the long term.”

Numerous expensive efforts aim to stave off the intruding saltwater in Miami. They include beach replenishment, the costly process of restoring sand that has eroded and washed away back to the coastline. (Hawai’i is currently spending $3-4 million to replenish Waikiki Beach.) Pilkey argues that “beach replenishment is costly, only temporary and will become increasingly less feasible as the sea rises.”

Aside from beach replenishment, there are sea walls. A $4 billion Stormwater Master Plan, which includes an assessment of the city’s roads and drainage infrastructure and plans for sea walls and stormwater pumps, aims to protect Miami against sea level rise. The U.S. Army Corps of Engineers also has plans, currently estimated to cost $6 billion, to build a sea wall. But according to Pilkey, sea walls will be ineffective in Miami since the saltwater will be able to inundate through the porous limestone. Pumps, too, he argues, “would be an exercise in futility. Pumping out the water flooding the city from all sides as a result of sea-level rise… would be like attempting to lower the level of the ocean with pumps. As fast as the water could be pumped out, the same volume from the sea would come in.” He argues that managed retreat is the best solution that no one wants to discuss.

Tina Gerhardt is an environmental journalist. She covers international climate negotiations, energy policy, sea level rise and related direct actions. Her work has been published by Grist, The Progressive, The Nation, Sierra and the Washington Monthly.