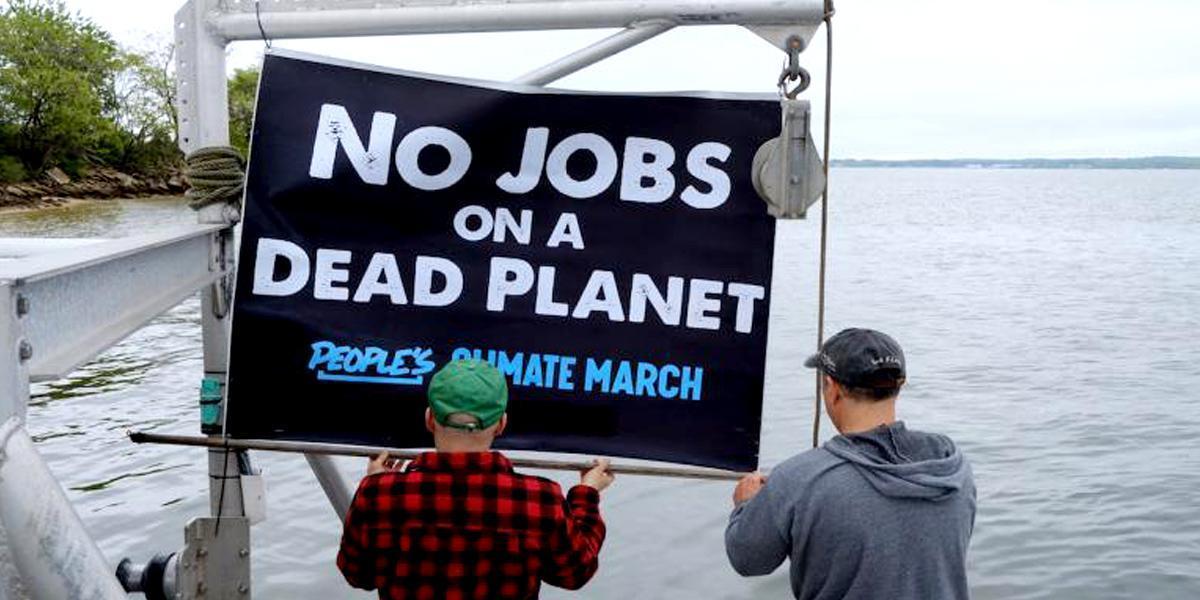 On President Trump’s first Earth Day in the White House, he declared on Twitter that “we celebrate our beautiful forests, lakes and lands”—an amiable if blasé arm-punch to the planet from the leader of the free world.

Until a few hours later that is, when the president resorted to his usual right cross.

“I am committed to keeping our air and water clean,” he tweeted, “but always remember that economic growth enhances environmental protection. Jobs matter!”

Rarely does President Trump or his surrogates miss an opportunity to propound that “jobs matter” when it comes to the nation’s environmental policies—especially where climate change is concerned. This binary logic—environmental protection equals job killer—is deeply woven into their world view. Trump has repeatedly called Obama-era initiatives like the Clean Power Plan “job killers” and vowed to “rescind all the job-destroying Obama executive actions, including the Climate Action Plan.”

The delegation of fishermen that set sail Wednesday from a marina in Solomons, Maryland, would beg to differ. The only “job destroyer” for them is climate change.

Concerned about the threat global warming poses to their livelihoods, a crew of sustainable ocean farmers began a three-day journey they’re calling the “Climate March by Sea.” At the tiller of the small commercial fishing boat is Bren Smith, owner of Thimble Island Ocean Farm and the executive director of GreenWave. They’re heading south down the Chesapeake before they plan to turn north up the Potomac on their way to Washington, DC.

Their final destination: the Peoples Climate March, when thousands of people, including indigenous, civic, social justice, business and environmental advocacy groups are set to take to the streets of the nation’s capital to demand action on climate, jobs and justice.

“Climate change was supposed to be a slow lobster boil,” Smith said in an interview before casting off. “For me, it arrived 100 years earlier than expected. We fishermen are the citizen scientists reporting that water temperatures are going up, species are moving north, the weather is becoming more extreme. We can see it with our own eyes. We’re way beyond the idea of climate denial.”

For fishermen, the real crisis isn’t government regulation, but the threats climate change poses to healthy oceans and seas. Marine and coastal fisheries contribute more than $200 billion in economic activity and 1.8 million jobs in the U.S. each year, according to the National Oceanic and Atmospheric Administration (NOAA). The World Wildlife Fund reports that marine populations are in catastrophic decline, plunging by 49 percent between 1970 and 2012, thanks in part to ocean acidification caused by warming waters, rising sea levels and extreme weather.

Meanwhile, more than 40 percent of fisheries have crashed due to overfishing, resulting in upward of $50 billion in economic losses, the California Environmental Associates assessed in its Charting a Course to Sustainable Fisheries report. One out of four marine species is threatened as a result of overfishing and climate change, among other factors, with 37 out of 1,288 bony fish species facing extinction, according to the International Union for Conservation of Nature’s Red List of Threatened Species.

The Climate March by Sea will cover 150 miles over three days, making occasional stops to pick up supporters. The crew of ocean farmers and commercial fishermen will be posting and live tweeting along the way on GreenWave’s Facebook, Twitter and Instagram pages with the hashtag #climatemarchbysea. They hope the voyage will help adrenalize public discourse about solutions to the climate crisis in the days leading up to the Peoples Climate March this Saturday.

An eclectic medley of individual, advocacy and corporate partners have come together to sponsor the journey, including celebrity chefs René Redzepi and David Chang, Patagonia, Ben and Jerry’s, Dr. Bronners, 350.org, Bioneers, the Natural Resources Defense Council, Oceana and the Sierra Club, among others. The trip’s organizers are also raising individual donations to help pay for supplies and to sponsor more fishermen.

During the voyage, the crew will cowrite a letter, addressed to President Trump, in which they intend to make clear that climate change itself, not the policies devised to combat it, threatens the economy, their jobs and their way of life. They will also demand an end to the planned cuts to agencies like NOAA and the U.S. Environmental Protection Agency. Smith plans to reaffirm in the letter what has become his most ardent message: There will be no jobs on a dead planet.

“Climate change is an economic issue, not just an environmental issue,” he said. “It’s not just about the birds and the bees. It’s also about how do I run a small business and make a living in an era of extreme weather? We’re heading to DC to send that message—that our livelihoods depend on a healthy ecosystem. That for those of us who care about building domestic employment, we have to mitigate climate change and protect our water.”

For Smith, the Climate March by Sea is the latest in a multi-decade career during which he witnessed the ramifications of overfishing and extreme weather firsthand. A high school dropout who grew up in a fishing village, Smith first cast out to learn how to fish when he was 14. He started working on the Bering Sea as a fisherman at the height of industrialized fishing, catching fish that mostly went to companies like McDonald’s for fish sandwiches. “We were tearing up entire ecosystems with our trawls, producing some of the unhealthiest food,” he said.

Later, after he’d set up his own oyster farm, two hurricanes in a row wiped him out: Hurricane Sandy and Hurricane Irene. Smith lost 90 percent of his crops, he said. Most of his gear washed out to sea.

When he began the process of rebuilding, he took an interest in extreme weather and what was causing it. He quickly became disillusioned.

Smith developed an innovative form of marine polyculture featuring a mix of shellfish and seaweed, which he calls “3-D farming.” Seaweed soaks up five times as much carbon as land-based plants and is rich in omega-3s, vitamins and minerals. It also serves as storm-surge protectors. “So you can see this nexus of new environmentalism, which isn’t just about conservation,” he said, “it’s about jobs, environmental protection and addressing food security all at once. I think we’re at that sweet spot.”

Since then, Smith has also created GreenWave, a nonprofit, to open-source his model of sustainable ocean farming for other fishermen and to engage in policy work and research around ocean planning, such as developing new mobile hatcheries. He also runs Seagreen Farms, which is a for-profit in the early stages of building seafood hubs in poor neighborhoods.

“I’m not really an environmentalist per se,” he said. “My journey has been trying to figure out how to spend my life working on the water. This jobs-versus-environment choice that the administration keeps telling us, whether we’re coal miners or fishermen, is a false choice. Environmentalism and the future of the new economy are inextricably linked.”

The Climate March by Sea will dock at the Washington Marina in Georgetown on Friday morning, where the crew will hold a press conference at 10:00 a.m. They’ll host an event that night at Patagonia, where they will be shucking oysters, serving beer and making signs as they prepare for the Peoples Climate March the following day.

“The Peoples Climate March represents to me the future of environmentalism,” he said. “It’s also time to push back. We need to defend our ground, our waters, our funding. We need to drive home that there is a whole generation of blue collar people that believe in climate change and demand that it be addressed now.”