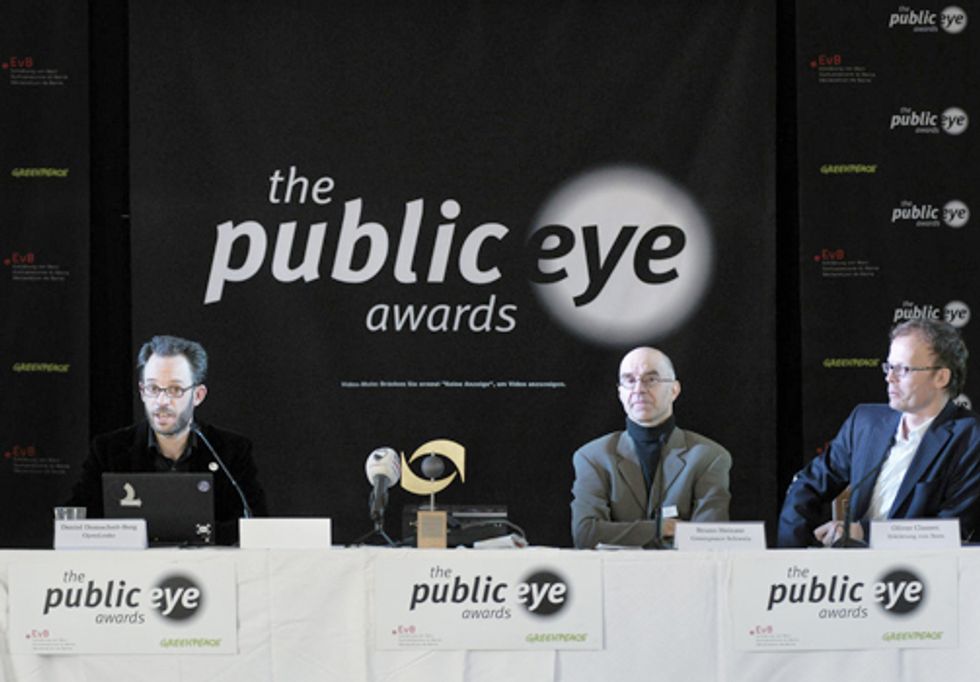 Each year since 1981, to counterbalance the seemingly never-ending awards ceremonies honoring the film industry, a different kind of award has cropped up—the Golden Raspberries, better known as the Razzies.

The day before the Academy Awards ceremony, the Razzies honor the worst performances in film. And to show the rest of the world that they don't take themselves too seriously, actors—for the most part—take the dubious Razzie nominations and awards in stride.

In fact, Sandra Bullock appeared at the Razzies to accept her "win" for worst actress of 2009 just the day before winning an Academy Award for best actress for her work in The Blind Side. Fortunately for her, no one remembered her other major release—All About Steve, which garnered her a Golden Raspberry.

Today, the corporate-world's version of the Razzie—The Public Eye Award—was awarded in Davos, Switzerland (in time with the World Economic Forum currently taking place there) to honor the corporation with the most "contempt for the environment and human rights" in the world.

But unlike the Razzies, where everything has the sparkle of humor in the cozy world of make-believe, the Public Eye Awards shed light on very real atrocities. And so this year's winner, Vale, a Brazilian multi-national mining corporation, won't have a spokesman on hand to accept the award.

By staging the Public Eye Award announcement at the world's largest gathering of leaders from politics, business, media and civil society, the impact is magnified "to remind corporations of their social and environmental responsibility."

The Public Eye Awards website has this to say about Vale:

Mines, steel plants, railroads, ports and hydroelectric dams at the expense of people and the environment—Vale is the second-largest corporation in Brazil, the second-largest mining corporation worldwide, operating in nearly 40 countries, and the largest global producer of iron ore. The corporation’s 70-year history is tarnished by repeated human rights abuses, inhumane working conditions, pillaging of the public heritage and the ruthless exploitation of nature.  An international network linking communities and workers affected by Vale was created in 2010. It recently launched a dossiê describing several of the worst cases of Vale’s disregard for people and the environment in eight countries. One such example is the company’s recent purchase of a major stake in the consortium engaged in building the notorious Belo Monte Dam Complex in the Amazon. If the massive dam project continues, it will have disastrous social and environmental consequences, including the forced relocation of 40,000 people and devastation of a riverine ecosystem that is the basis of survival for indigenous communities, riverbank communities and fisherfolk—who have not had a voice in the matter, nor will they receive adequate compensation.

Vale received more than 25,000 votes to win the Public Eye Award of 2012. Other frontrunners included:

For more information about the awards and other finalists, click here.