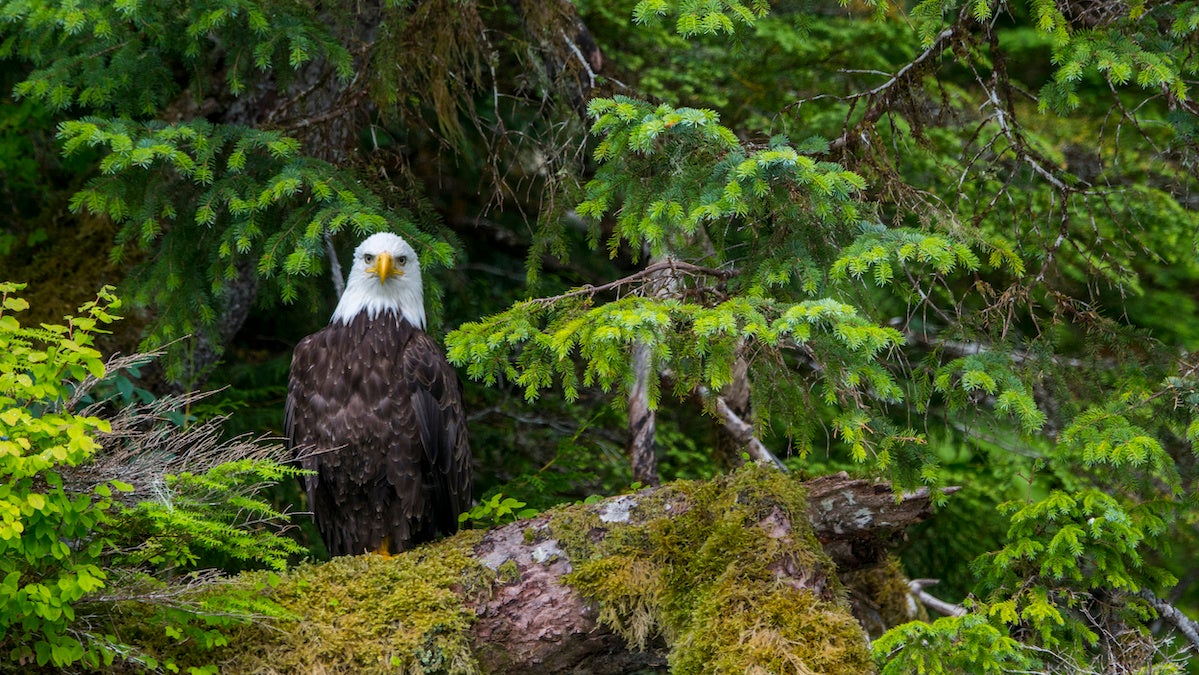 A bald eagle in the forest along the shoreline of Takatz Bay on Baranof Island, Tongass National Forest, Alaska on July 13, 2019. Wolfgang Kaehler / LightRocket via Getty Images

The Forest Service plan targeted part of the Tongass National Forest on Prince of Wales Island. It would have been the largest sale of national forest timber in 30 years, Earthjustice pointed out, permitting 164 miles of new roads and clearing an area of forest three times the size of Manhattan, more than half of it old growth. But U.S. District Court Judge Sharon Gleason ruled that the plan violated the National Environmental Policy Act (NEPA) because the agency did not take all of its potential impacts into account, The Hill reported.

“The magnificent, ancient forests of the Tongass just got a reprieve from the chain saws,” Randi Spivak, public lands director at the Center for Biological Diversity (CBD), said in the Earthjustice press release. “We’re thrilled the court agreed that the Trump administration broke the law when it approved cutting thousands of acres of old-growth trees. It’s critical to protect our remaining old-growth forests to have any chance of stopping the extinction crisis and slowing climate change.”

CBD was one of eight conservation groups that challenged the plan with representation from Earthjustice, according to fellow plaintiff the National Audubon Society. The groups, also including Southeast Alaska Conservation Council, Alaska Rainforest Defenders, Defenders of Wildlife, Sierra Club, Alaska Wilderness League and the Natural Resources Defense Council, argued that it violated NEPA, which allows people to weigh in on major infrastructure projects that will impact their community. Prince of Wales Island is an important location for subsistence hunting and fishing, but the Forest Service did not say in its plans where logging would take place, which meant it was impossible for the local community to meaningfully respond to the plans.

Judge Gleason agreed with this assessment of the project, arguing that the service did not state where logging and road building would occur, according to Courthouse News Service.

“By not developing actual site-specific information, the Forest Service limited its ability to make informed decisions regarding impacts to subsistence uses and presented local communities with vague, hypothetical, and over-inclusive representations of the project’s effects over a 15-year period,” Gleason wrote.

Gleason also ruled that the plan violated the Alaska National Interest Lands Conservation Act, which requires federal agencies to determine how projects on public lands will impact those who use the lands for subsistence, according to The Audubon Society.

The ruling comes as the Trump administration is proposing changes to NEPA that would drastically weaken the landmark environmental law by, among other things, limiting the length of the review process, exempting certain projects from any review and allowing federal agencies to ignore a project’s climate impacts.

“The Prince of Wales project would’ve been the largest logging project that we have seen anywhere in our national forests in decades, and it would have destroyed thousands of acres of irreplaceable old-growth forest in the Tongass National Forest,” Miller said in the Earthjustice release. “Today’s ruling is a win for Southeast Alaska’s billion-dollar fishing and tourism industries, and a reminder as the Trump administration tries to significantly weaken the National Environmental Policy Act of the critical role NEPA plays in allowing the public to meaningfully weigh in on issues impacting their public lands.”

The ultimate fate of the Forest Service project is not yet known, as Judge Gleason did not yet decide on a legal remedy for the plaintiffs’ suit. The service did not respond to requests for comment from either Courthouse News Service or The Hill.