Missouri River Drought Was Its Worst in 1,200 Years, Study Finds 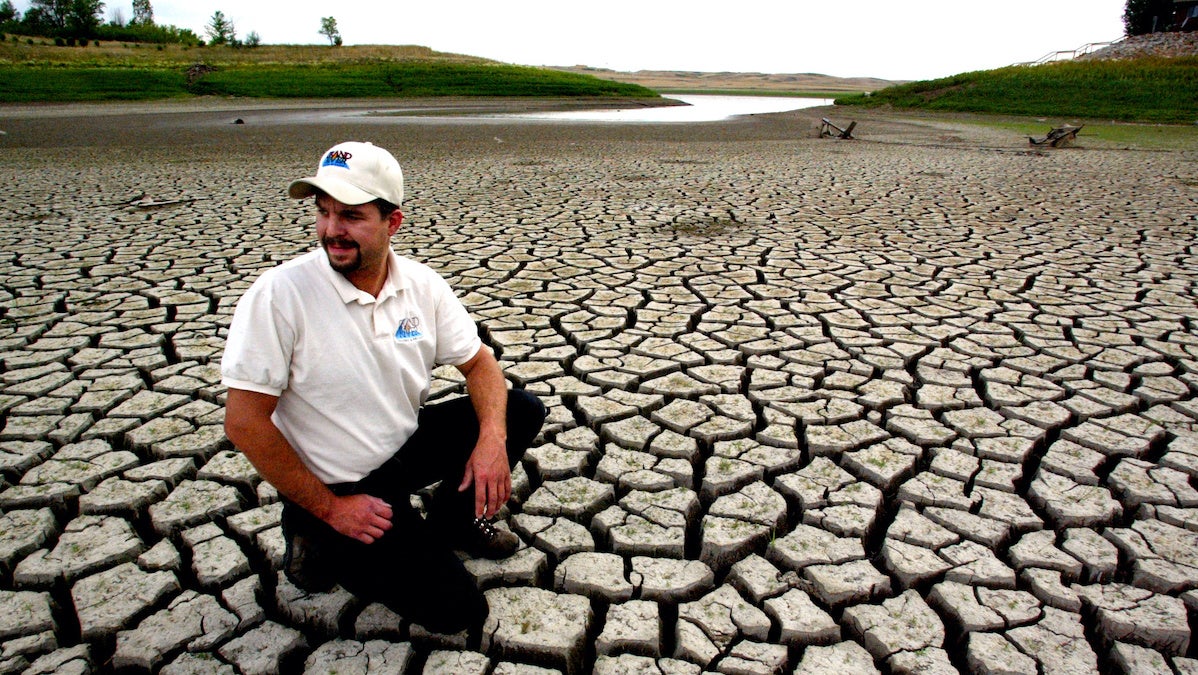 With the water level of the Missouri River at an all-time low and falling on June 30, 2002, a bait and dock manager at Standing Rock Indian Reservation near Mobridge, South Dakota points out the dry, cracked mud where boat launching river water used to stand. MARLIN LEVISON / Star Tribune via Getty Images

For the first decade of the 2000s, the Missouri River, the nation’s longest river, was drier than it’s been in more than 1,200 years. The culprit is the climate crisis, according to a new study published in the Proceedings of the National Academy of Sciences, or PNAS.

Since global temperatures continue to warm, the severe droughts like the one the Upper Missouri River basin experienced are likely to happen again, as The Washington Post reported. Rising temperatures that reduced the amount of snowpack melt in the Rocky Mountains in Montana and North Dakota caused the drop in the water level that persisted from 2000 to 2010, according to the study.

“In the Upper Missouri River basin, what we’re really worried about is a future of snow droughts,” said Erika Wise, an associate professor in the geography department at the University of North Carolina at Chapel Hill and study co-author, to The Washington Post. “Snowpack in the Rocky Mountains is very sensitive to warming temperatures. Snow provides the water for stream flow to the Upper Missouri, and we’ve designed our agriculture and infrastructure around expectations that this water will be provided at a certain pace over a certain part of the year.”

The Missouri River runs 2,300 miles from western Montana to St. Louis, where it joins the Mississippi River. It runs through North and South Dakota and past Nebraska, Iowa, Kansas and Missouri, where it supports farming in several states and provides fresh water for dozens of municipalities.

“In terms of the most severe flow deficits, the driest years of the Turn-Of-The-Century-Drought in the [Upper Missouri River Basin] appear unmatched over the last 1,200 years,” the study said, as The Washington Post reported. “Only a single event in the late 13th century rivaled the greatest deficits of this most recent event.”

The basin also had drought in the past decade, most notably in 2012, 2013, and 2017, but researchers do not yet know how severe it was compared to the Turn-Of-The-Century-Drought. What they do know, though, is that the severity of the drought at the beginning of the 2000s was worse than the Dust Bowl.

Prolonged drought disrupts agriculture and hurts the local economy, the researches noted. It also harms marine life that must cope with lower water levels and animals like waterfowl that rely on fish to survive, as The Washington Post reported.

“Future warming is anticipated to cause increasingly severe droughts by enhancing water deficits that could prove challenging for water management,” the study said.

As The Washington Post reported, the researchers were surprised to find such a decreased water table in the Midwest.

“We don’t tend to think of the upper Missouri region as being as drought-threatened as a region like the Southwest United States,” said Wise to The Washington Post. “These findings show that the upper Missouri Basin is reflecting some of the same changes that we see elsewhere across North America.”

These findings echo another recent study that focused on the American Southwest. That study, published in Science, found that the region is likely to soon experience the most severe drought since the 800s, as EcoWatch reported.

Scientists at NASA and Columbia University had thought that such severe drought would occur around 2030, but last month’s study of tree rings showed that the phenomenon has already started. “The megadrought era seems to be reemerging, but for a different reason than the [past] megadroughts,” said Park Williams, the study’s lead author and a researcher at the Lamont-Doherty Earth Observatory at Columbia University, as The Washington Post reported.