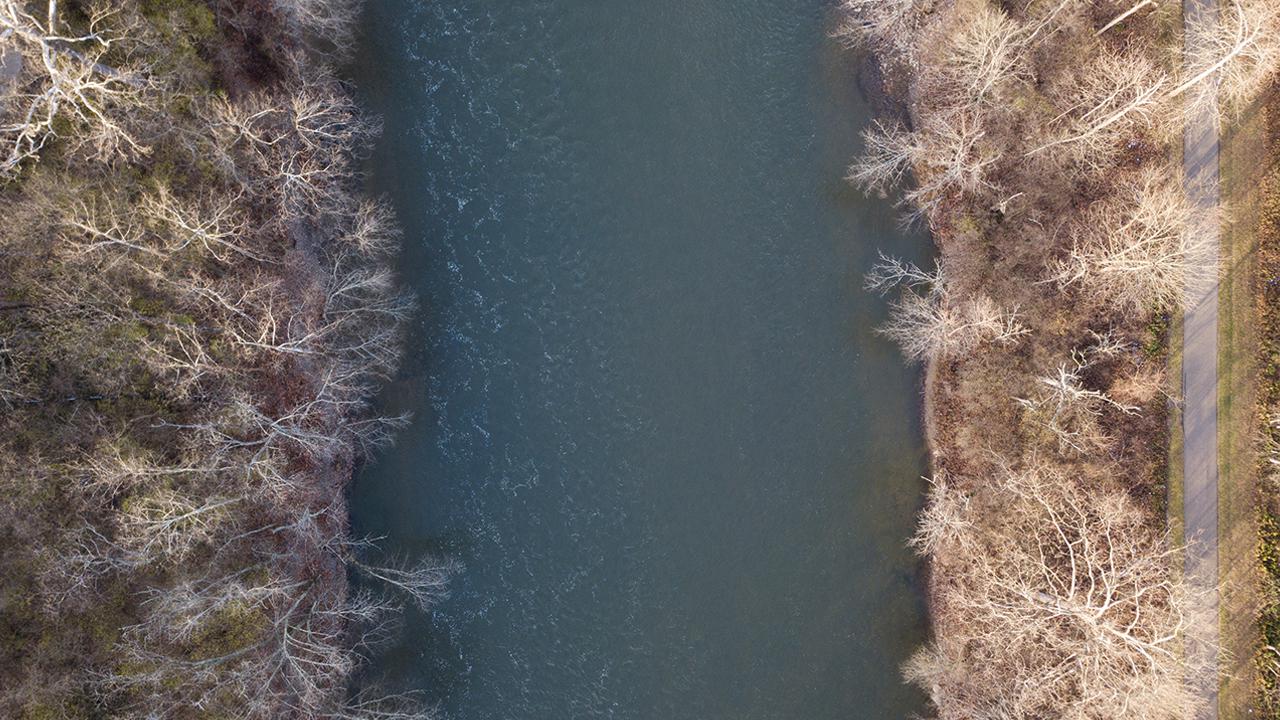 An aerial view of the National Wild and Scenic Little Miami River in Maineville, Ohio, on Dec. 3, 2020. Joe Timmerman

Few leaves are still falling off trees and down the ever-running water of the National Wild and Scenic Little Miami River, where they float through five counties and 111 miles of Southwest Ohio, into the Ohio River and toward the Mississippi before eventually finding their way into the Gulf of Mexico. Today, these 111 miles of Little Miami River are the cleanest that they have been in the last 40 years, and as the world may seem largely disconnected due to the coronavirus pandemic, a connection between people over time is helping to create the river’s lasting sustainability.

Since the end of the last Ice Age before this land was known as America, humans have lived along the Little Miami River and enjoyed the resources it provides — drinking the water alongside its banks while hunting for fish within, using the clay to build pottery or structures, and floating on the surface in kayaks or canoes like the leaves still do today. In that time, the river has seen many seasons of change, from shifts in human culture alongside its banks through community development to biological diversities in its rich, natural environment, according to the Little Miami Ecology and History report.

When the Little Miami was designated as Ohio’s first State Scenic River and included in the National Wild and Scenic River System in 1973, according to the Ohio Department of Natural Resources, locals had already been active in its conservation and return to sustainability for more than half a decade. The Little Miami Conservancy (LMC), a non-profit organization fueled by passion for the protection of the river, led the effort in Washington to recognize the importance of protecting the Little Miami River as not only a local hidden gem, but as a national treasure.

The lower section of the river runs right through the heart of Loveland, Ohio, where LMC and its current executive director, Eric Partee, is based. Partee’s passion roots from the original director of the conservancy, Glenn Thompson, who in 1967 embodied the idea that their effort isn’t about one single person, but rather about everyone coming together to save the river.

“Someday, a corridor of green will stretch from one end of the river to the other. Individuals and families will enjoy peace and quiet and restoration of spirit that comes with clean water, birds, and trees,” a quote from Glenn Thompson that Partee believes the conservancy has lived up to. 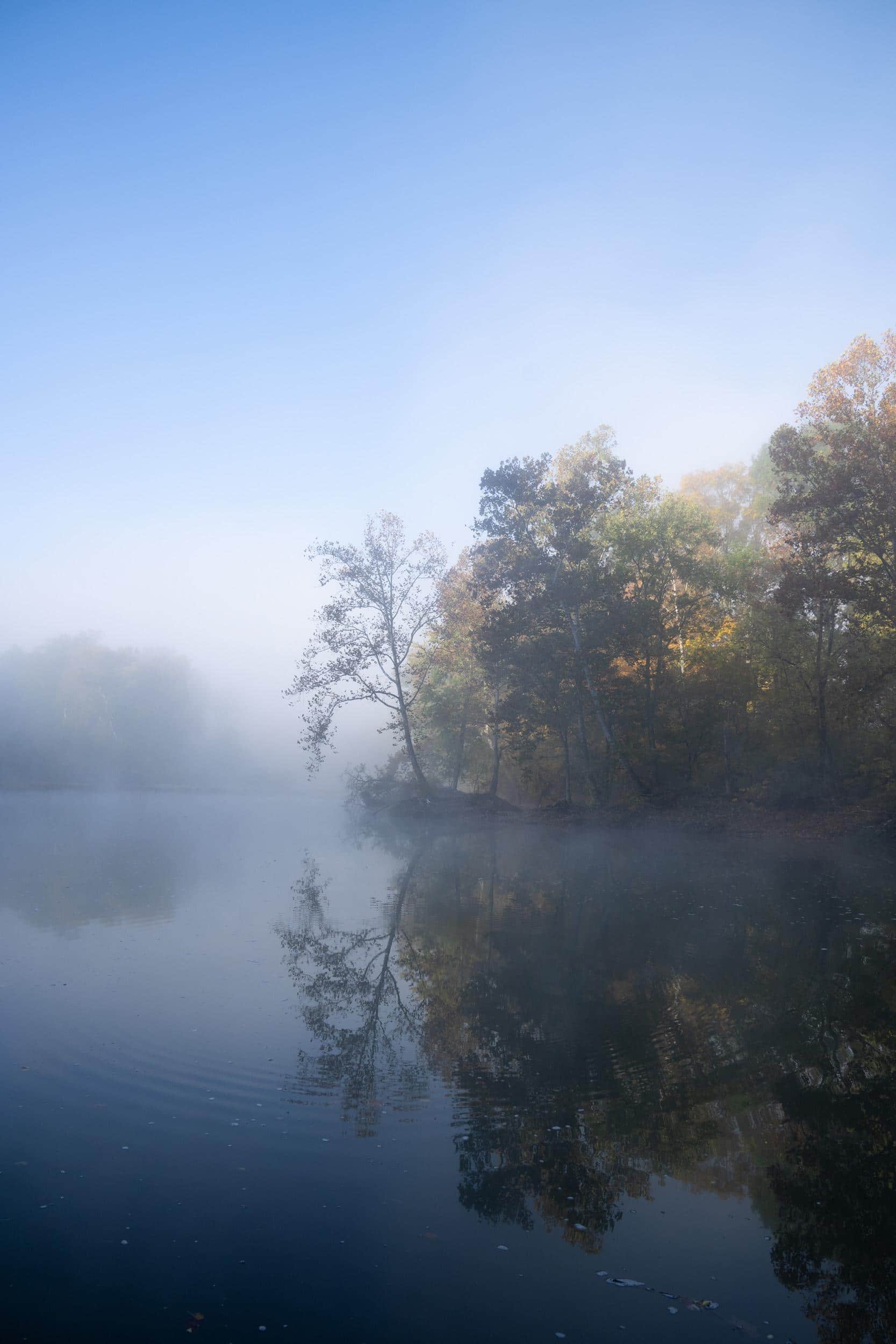 A ripple in the water caused by a fish moves below fall trees as the sun rises in Loveland, Ohio, on Tuesday, Oct. 13, 2020. The Little Miami River flows through 5 counties and 111 miles of Southwest Ohio, including Clermont County and Hamilton County where Loveland lies between. Joe Timmerman

Since its origin, the conservancy has worked with agencies like the Ohio Environmental Protection Agency (OEPA), who records the condition of the Little Miami River every 10 years by sampling fish life. In the 1980s, only 4% of the Little Miami River was in full attainment of water quality health, but in recent years, the chart has flipped, and as of 2007, the river is at 96% attainment of health, according to OEPA research.

​“As early as the turn of the century, this river was very well polluted. (There were) a lot of deformed fish, it was not anything close to exceptional,” Partee said in an interview. “It took a lot of discussion, a little bit of arm twisting, and some local funding to fund improvements to the sewage treatment plants to ratchet down on phosphorus, which was the main culprit … when we got the treatment plants to ratchet down on that, biology basically turned around on a dime — from terrible to exceptional.”

To make sure the river stays healthy, LMC introduced a set of equipment called YSI Water Quality Sondes, which monitor dissolved oxygen in nine locations throughout the length of the entire Little Miami, according to Partee. Each system monitors oxygen every 15 minutes, allowing for constant awareness of river health to prevent a reversion of quality. The conservancy also takes pride in its work on forest restoration through buying riverfront properties, planting trees, removing invasive species, and working collectively to clean up trash in the effort to grow closer to the initial goal of a corridor of green along the riverbank. 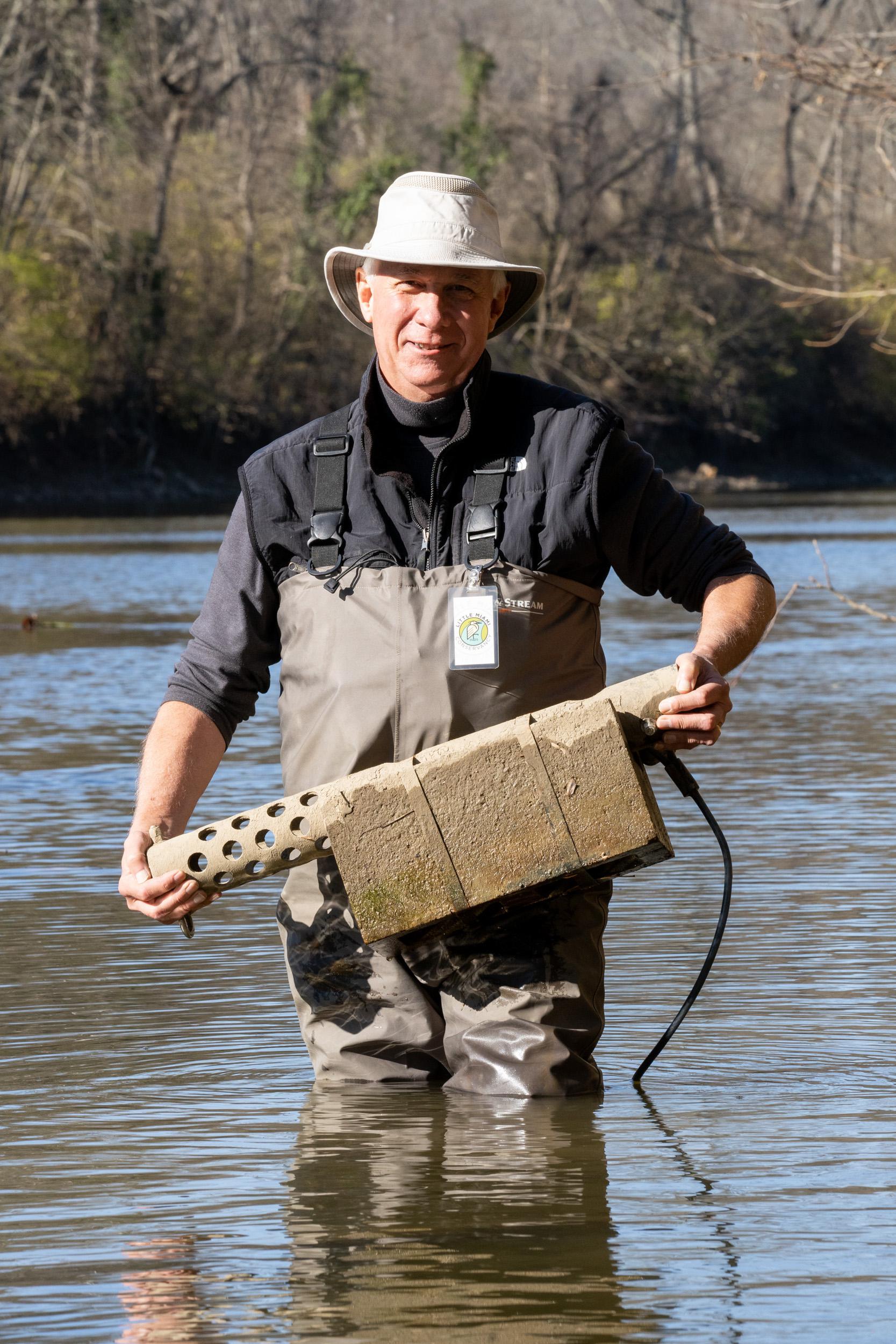 Eric Partee, executive director of the Little Miami Conservancy, holds one of nine water quality sondes that are found all along the length of the river, this one in Milford, Ohio, on Tuesday, Nov. 16, 2020. A water quality sonde uses sensors to measure dissolved oxygen in the river, which is recorded every 15 minutes in 3-month spans and is checked once a week by Partee and volunteers of the conservancy. “Ninety-six percent of the river is in full attainment with exceptional habitat quality, it’s just in fantastic condition. The challenge is to keep it that way,” Partee said. Joe Timmerman

A short walk from the doors of the conservancy is the Loveland Canoe and Kayak Livery, owned by Mark and Robyn Bersani, which is just one of the many businesses along the Little Miami River that rely on its health as their main resource for income. The Bersanis work closely with the conservancy each year by offering and volunteering for cleanups as well as generous donations. This year, along with two other liveries including Rivers Edge and Scenic River, their combined donation to the Little Miami Conservancy’s effort was ,000, according to Bersani.

“We’re involved from a grassroots portion, to actually helping with cleanups, to keeping an eye on the river, as well as donating and continuing to fund the good work that they do,” Bersani said in an interview. “It comes down to the people that live along the river, people that visit the river, the people in the community, if the river is going to stay clean. This river is very natural, it looks like it did 300 years ago … it is vital that the citizens all realize they have a role in this.”

Up the road at Loveland High School, Amy Aspenwall, an AP environmental science teacher teaches teenagers the importance of environmental awareness through hands-on experiences in places like the Little Miami River.

In an interview over Zoom, Aspenwall talked about the importance of students getting out into nature to actually see how humans fit in the environment, because “if you don’t see it, it’s really not your problem,” Aspenwall said. From understanding food waste to the water drinking system to sewer treatment facilities, her goal is to allow students the opportunity to realize a sense of civic responsibility.

“It’s important for students to start to think of themselves as a bigger picture rather than just someone following teacher instructions,” Aspenwall said. “I want them to start thinking on their own and realize how powerful they are as a consumer.”

Although the Little Miami River is of “exceptional quality,” according to a 2010 water quality monitoring report by the OEPA, “the tributaries were generally of a lower quality.”

Michelle Waller, an environmental specialist in the Division of Surface Water at OEPA, discussed the difficulties the river has faced through poor nutrients entering the river due to excess phosphorus from treatment plants and still faces through agricultural runoff from farms, in an interview over Zoom.

Waller said that placing phosphorus limits on the main stem’s water treatment plants in recent years proved to show major improvements in river nutrients after the OEPA performed sampling, but other negative sources are out of their reach. “We do not have authority over agriculture the way we do with what we call point sources, the treatment plants,” Waller said. “We try to work with local Soil and Water Conservation Districts, they try to get the word out about good farming practices … but there is no real regulatory authority which is a really big problem.”

The majority of land along the Little Miami River is agricultural, unlike other major rivers in Ohio that have industry running alongside their waters. And just like the branches of community that have come together to help preserve the river, many tributary streams and creeks branch out from the Little Miami, though those tributaries can be overlooked.

As most organizations, including the OEPA and LMC, focus their efforts on upholding the exceptional quality of the main stem of the Little Miami River, there is still work to be done in the tributaries. Partee talked about how there just isn’t enough time for LMC to visit every tributary and talk to every landowner. However, near Beaver Creek in Greene County, there is an organization called the Beaver Creek Wetlands Association, which has adopted that very issue. “I think that’s probably the best future for the watershed, to have local citizens dealing with multiple tributaries and try to restore or protect it,” said Partee. 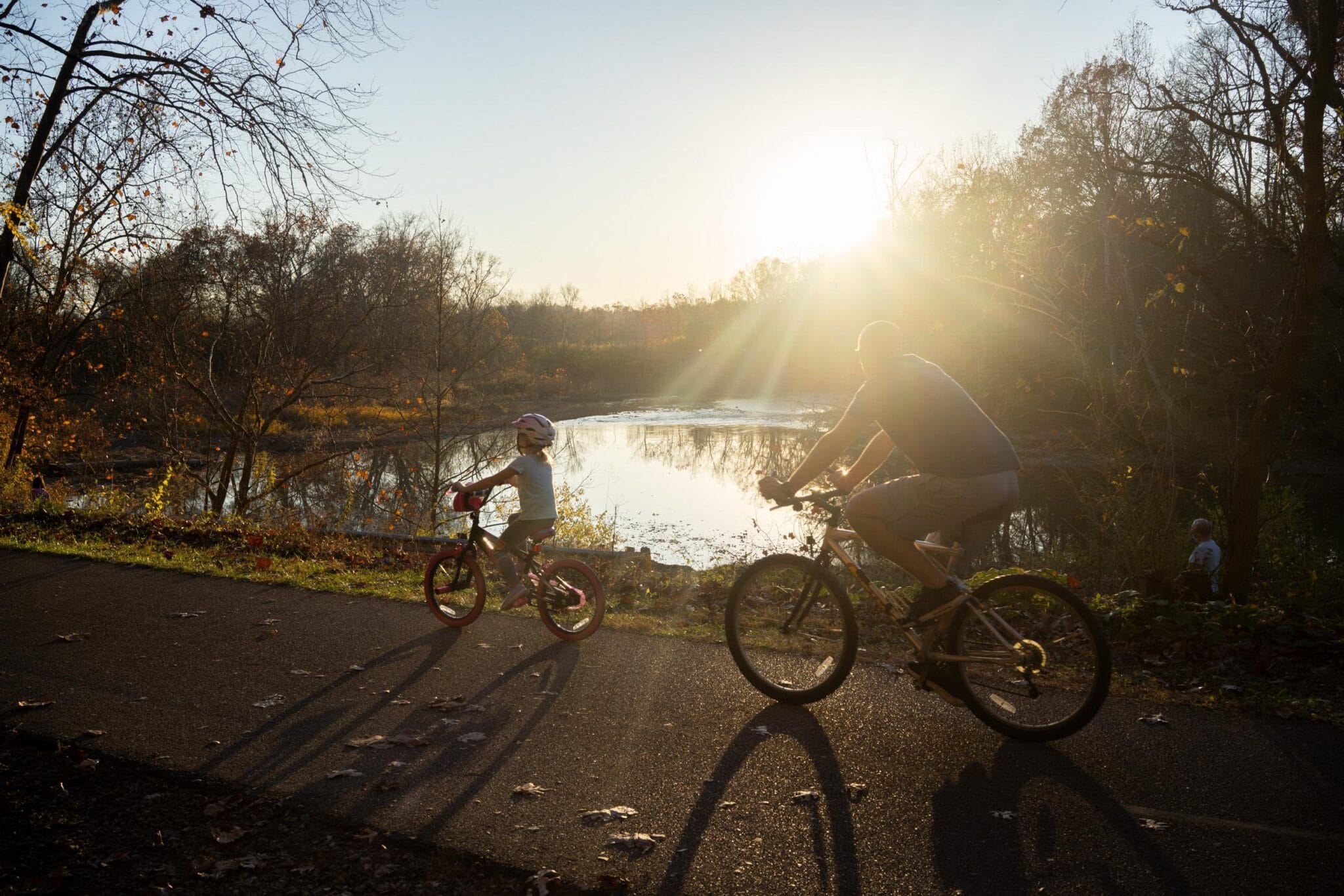 People bike on a section of the Loveland Bike Trail alongside the Little Miami River in Loveland, Ohio, on Monday, Nov. 8, 2020. Joe Timmerman

Between the shared relationships of the Little Miami Conservancy, OEPA, local government officials, developers, landowners, non-profits, teachers, and local business owners, a community has come together and worked toward the common effort to make a positive, sustainable change in the health of the river.

The timelessness of the Little Miami River will carry on as long as its water continues to run. And as it always has been, it’s still up to the people alongside the riverbank to make sure that the water runs clean for generations to come. As the late author Nelson Henderson said, and Eric Partee paraphrased when we talked together, “The true meaning of life is to plant trees, under whose shade you do not expect to sit.”

Note: The next OEPA Little Miami River Watershed TMDL Report will be produced and published by 2022, according to the last OEPA TMDL report.

Joe Timmerman is a sophomore journalism and photojournalism student at E.W. Scripps School of Journalism and the School of Visual Communications at Ohio University in Athens, Ohio. Joe is passionate about finding natural connections between people and sharing those stories he finds.