Water Conflicts Will Intensify. Can We Predict the Worst Problems Before Conditions Boil Over? 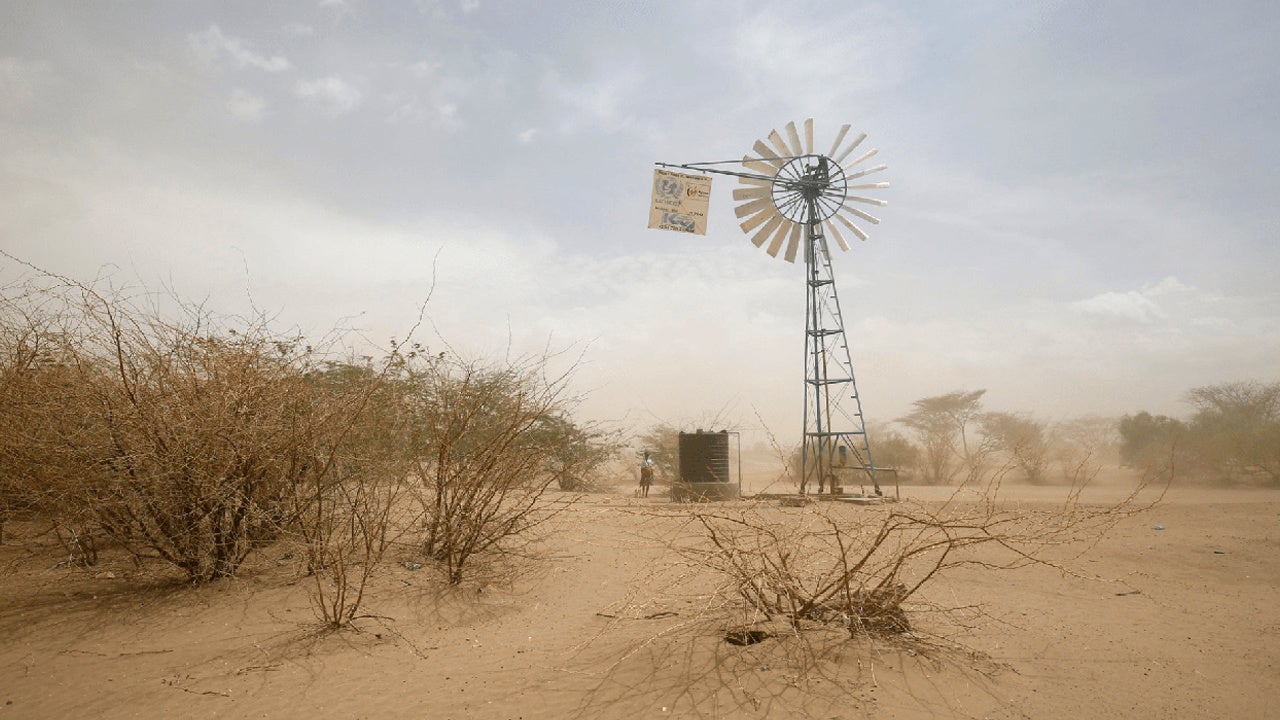 More than 2.7 million people have been affected by the drought in Kenya. Russell Watkins / DFID / CC BY 2.0

In 2015 an estimated 1.8 million migrants crossed into the European Union, fleeing countries gripped by violence, political upheaval and resource scarcity like Syria, Afghanistan, Kosovo, Eritrea and Nigeria. Many made their trips in flimsy, overcrowded boats. Thousands drowned along the way. E.U. governments struggled to deal with the influx of new arrivals, and the confluence of humanitarian and political crises that resulted — including a surge in right-wing anti-immigrant rhetoric.

Advance warning, experts say, could have helped world governments and aid workers anticipate and adapt for these problems, and probably save lives in the process. But how do we predict future conflicts on a rapidly warming planet?

The Netherlands, which has experienced sharp rises in both immigration and far-right populism, decided to try to answer that question by funding a project to model which areas of the world were likely to face upcoming conflicts.

The result — the Water, Peace and Security Global Early Warning Tool — was released in December. It’s an online interface that analyzes data on violent conflicts, as well as dozens of economic, environmental and social indicators, to help pinpoint hotspots where worsening conditions — like food shortages or drought — are likely to shift to violent conflict within the year.

“We used a number of traditional indicators of predicting conflicts, such as economic strength, political, stability, demographic trends and past conflict, which is actually a predictor of future conflict,” said Charles Iceland, director of global and national water initiatives at the World Resources Institute. The organization partnered with IHE Delft, Deltares, The Hague Center for Strategic Studies, International Alert and Wetlands International to develop the tool. 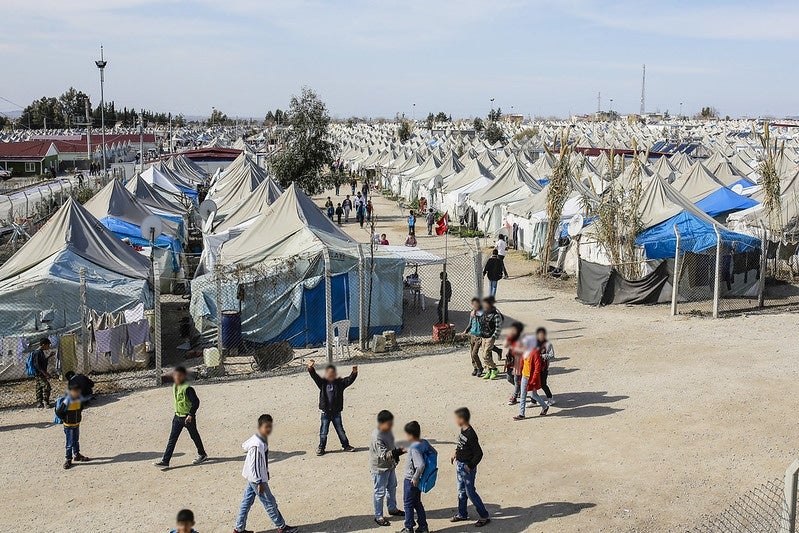 When it comes to determining where problems could erupt, water is a key part of the equation.

“We put in a number of water-risk variables on the assumption that no conflict is caused by water alone,” Iceland said, “but water may be present as an exacerbating or contributing factor along with a lot of other features of society.”

Most recently, drought was one of the driving factors in the unrest that led to Syria’s civil war and increasing destabilization in Mali. It was also an underlying contributor to the deadly conflict in Darfur in 2003 and has bolstered the efforts of terrorist organizations like Boko Haram.

The link between water stress and other resource pressures, Iceland warms, is becoming more acute as global environmental crises worsen.

“When you look at the big picture, we’re consuming a lot more resources now then are replenished by our natural systems,” he said. “Just that alone is enough to cause a lot of problems. And then on top of that you’ve got a changing climate that’s further exacerbating the situation.”

The links between climate change and global security are fast becoming a top concern.

A new report released this week by U.S. national security, military and intelligence professionals at the Center for Climate and Security mapped future climate change scenarios and their effects on security. Not surprisingly, the findings are troubling. Competition for dwindling resources, they predict, will increase social tensions and could topple already-fragile states. Natural disasters, social unrest and shrinking economic opportunities will push people from their homes and heighten migration pressures.

The report found that “even at scenarios of low warming, each region of the world will face severe risks to national and global security in the next three decades … Higher levels of warming will pose catastrophic, and likely irreversible, global security risks over the course of the 21st century.”

Iceland hopes that the early warning tool could help play a role in averting some crises that could come from these and other scenarios that lead to violent conflict. 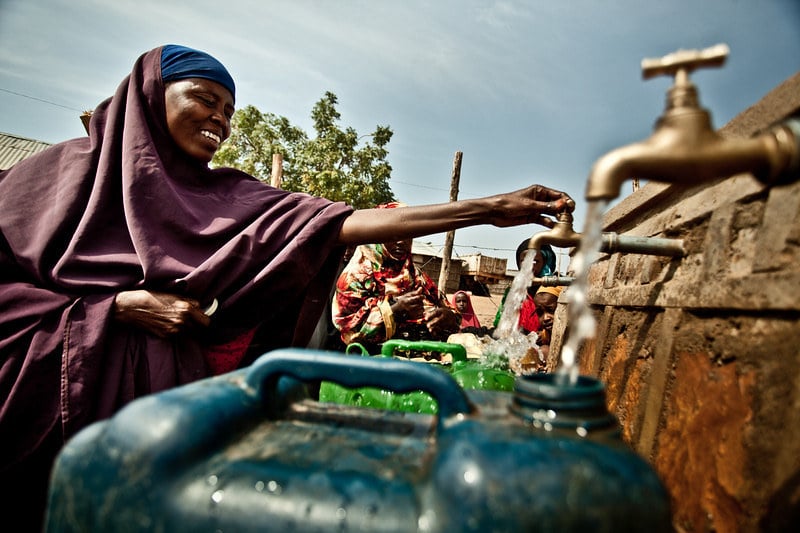 Habiba Hossen collects water from a rehabilitated distribution point in Ethiopia during a drought in 2012. Pablo Tosco / Oxfam / CC BY-NC-ND 2.0

But it’s a complicated picture.

“It would be wonderful to have a perfect tool to predict something as inherently complex as violent conflict,” said Peter Gleick, president emeritus of the Pacific Institute, which along with Oregon State University and New America are also affiliated partners of the project. “We’ll never have such a tool. But the more information we have about the many factors that contribute to violence the better, especially given the new, real and growing threat of climate disruption.”

How successful the resource ultimately is also depends on how, and by whom, it’s used. Simply knowing where trouble is brewing is only the first step. Iceland says the resource is geared for decision-makers like foreign-affairs ministries and intelligence departments, as well as development and disaster-relief experts at non-governmental organizations.

“A lot of these governments and non-government entities could use this information to try to figure out where the next problems can occur and get ready for it,” he said. “Or the global community could approach those national leaders in developing countries [where problems are predicted] and say, ‘We see that you’re likely to have a water-related problem in the near future, what are some strategies that we could develop with you to try to address this problem?'”

The system isn’t just available to diplomats and international NGOs, though — anyone can use it and download relevant data.

“You can look at a lot of other datasets on the website that might be used as contextual information,” said Iceland. “Things like where are the roads and reservoirs with respect to predicted conflict. Or where the population is very dense in relation to these predicted conflict areas.”

One area currently on the map as an emerging area of concern, he said, is Iran. The country has a dry environment with a rapidly growing population and is working toward being food self-sufficient.

“But they really don’t have enough water to do that and so a lot of these lakes and rivers are drying up,” said Iceland. That’s forcing people to abandon farms to move to cities, and those who’ve remained in agricultural communities are beginning to protest the government’s water allocations.

Other areas of concern include the eastern coast of South Africa and southern Iraq, he says, but it’s too soon yet to show any on-the-ground results from the early warning tool there or elsewhere.

Even so, the resource has started to reveal things that could soon help mitigate future conflicts or allow communities to adapt to upcoming problems.

“This new effort has already given us insight into areas where more efforts at smart water policies, improved management and environmental diplomacy are needed,” said Gleick.

And the more data we collect, the more we’ll be able to learn.

“I hope and expect the tool to improve over time,” he added.