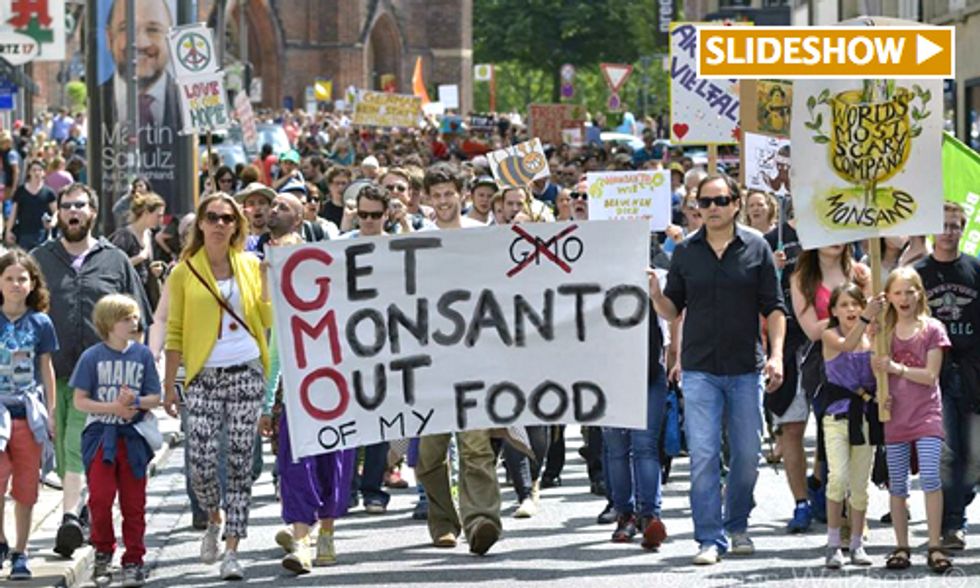 On May 24, millions of people  from around the world participated in the March Against Monsanto, calling for the permanent boycott of genetically engineered foods and other harmful agro-chemicals. Marches occurred on six continents, in 52 countries, with events in more than 400 cities, including 47 U.S. states.

Daniel Bissonnette, a very articulate 9-year-old, mesmerized listeners in this must-see video at a Vancouver, Canada, March Against Monsanto event, asking key questions on why children—the most vulnerable age group to ravages of genetically modified organisms (GMOs) and pesticide—are subjected to the worst food possible.

“Monsanto’s predatory business and corporate agricultural practices threatens their generation’s health, fertility and longevity," said Tami Monroe Canal, founder of March Against Monsanto (MAM) who was inspired to start the movement to protect her two daughters. "MAM supports a sustainable food production system. We must act now to stop GMOs and harmful pesticides.”

GMOs have been partially banned by Austria, Bulgaria, Germany, Greece, Hungary, Ireland, Japan, Luxembourg, Madeira, New Zealand, Peru, South America, Russia, France, Switzerland and Costa Rico, and are currently labelled in 62 countries. In India, more than 250,000 farmers have committed suicide after Monsanto's Bt cotton seeds did not perform as promised. Farmers, left in desperate poverty, are opting to free their families of debt by drinking Monsanto pesticide, thereby ending their lives. Many farmers in other countries are also stripped of their livelihood as a result of false promises, seed patenting and meticulous legal action on the part of Monsanto and other big-ag interests. In many parts of Africa, farmers are left to choose between starving or eating GMOs.

"If we fail to realize that March Against Monsanto is not about GMOs alone, then we have already lost the battle," said Kelly L. Derricks, founder of March Against Monsanto's Agent Orange awareness program, which educates supporters on this deadly chemical weapon that Monsanto was the largest manufacturer of during the Vietnam War era.

An Open Letter from World Scientists to All Governments Concerning Genetically Modified Organisms is signed by 828 scientists from 84 countries and details concerns regarding GMOs coupled with a call for an immediate 5-year suspension of GMO crops in order to conduct “a comprehensive public enquiry of agriculture and food security for all."