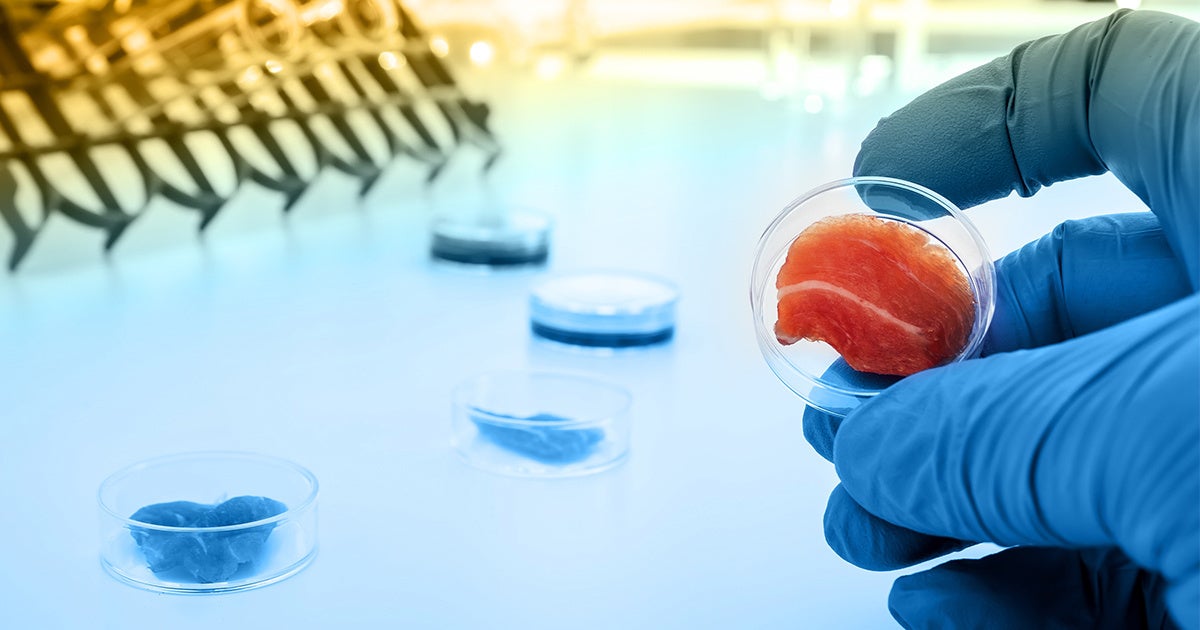 Then there is the polarizing “fake” versus “clean” meat framing that boils this complex topic down to a simple good versus bad dichotomy. The opposite of fake is of course the ambiguous but desirous “natural.” And modeled after “clean” energy, “clean” meat is by inference superior to its alternative, which must logically be “dirty” meat.

The narrative posited by, for now let us call it cultured meat, proponents is that animal agriculture requires large amounts of land and water, and produces high levels of greenhouse gases (GHG). The environmental impacts of a product, such as a beef hamburger, is then compared to the anticipatory ones for producing a cultured hamburger patty through tissue engineering-based cellular agriculture.

I research how biotechnology can improve livestock production, and while it is true that conventional meat production has a large environmental footprint, the problem with this dichotomous framing is that it overlooks the rest of the story.

Cattle produce more than just hamburgers for well-off consumers, and they typically do so by utilizing rain-fed forage growing on non-arable land. Additionally, cellular hamburger patties are themselves not an environmental impact-free lunch, especially from the perspective of energy use.

Cultured meat requires the initial collection of stem cells from living animals and then greatly expanding their numbers in a bioreactor, a device for carrying out chemical processes. These living cells must be provided with nutrients in a suitable growth medium containing food-grade components that must be effective and efficient in supporting and promoting muscle cell growth. A typical growth medium contains an energy source such as glucose, synthetic amino acids, antibiotics, fetal bovine serum, horse serum and chicken embryo extract.

If cultured meat is to match or exceed the nutritional value of conventional meat products, nutrients found in meat not synthesized by muscle cells must be supplied as supplements in the culture medium. Conventional meat is a high-quality protein, meaning it has a full complement of essential amino acids. It also provides a source of several other desirable nutrients such as vitamins and minerals, and bioactive compounds.

Therefore to be nutritionally equivalent, a cultured meat medium would need to provide all of the essential amino acids, along with vitamin B12, an essential vitamin found solely in food products of animal origin. Vitamin B12 can be produced by microbes in fermentation tanks, and could be used to supplement a cultured meat product. It would also be necessary to supplement iron, an especially important nutrient for menstruating females, that is also high in beef.

The process for making cultured meat has technically challenging aspects. It includes manufacturing and purifying culture media and supplements in large quantities, expanding animal cells in a bioreactor, processing the resultant tissue into an edible product, removing and disposing of the spent media, and keeping the bioreactor clean. Each are themselves associated with their own set of costs, inputs and energy demands.

The start-to-end environmental footprint—called a life cycle assessment (LCA)—of cultured meat at large scale is not available, as no group has yet achieved this feat. Anticipatory life cycle analyses are therefore based on a range of assumptions, and vary dramatically, ranging from favorable to unfavorable comparisons to conventional meat production.

One study concluded that “in vitro biomass cultivation could require smaller quantities of agricultural inputs and land than livestock; however, those benefits could come at the expense of more intensive energy use as biological functions such as digestion and nutrient circulation are replaced by industrial equivalents.”

This idea of “industrial replacement of biological functions” emphasizes the point that nature has already developed a fully functional biological fermentation bioreactor for the conversion of inedible solar-powered cellulosic material, such as grass, into high-quality protein. It is called a cow. Ruminants have evolved, along with their large vat of rumen microbes, to digest cellulose, an insoluble carbohydrate, that is the main constituent of plant cell. That is their super power.

It does comes with the trade-off that methanogenic bacteria are required to perform this conversion and they produce methane, a greenhouse gas, that is subsequently burped up (eructated) by the cow.

A comparison of greenhouse gas emissions by source. During digestion, ruminants such as cows give off methane, a powerful greenhouse gas.EPA

To keep greenhouse gas emissions from livestock in perspective, according to the U.S. Environmental Protection Agency, all of agriculture is responsible for 9 percent of GHG emissions in the U.S., and collectively animal agriculture is responsible for slightly less than 4 percent. Entirely eliminating all animals from U.S. agricultural production systems would decrease GHG emission by only 2.6 percent. By contrast, energy production for electricity and transportation are each responsible for 28 percent of U.S. greenhouse gases.

Cattle and Land Use

On a global scale, the earth’s 1.5 billion cattle are found in almost all climatic zones. They have been bred for adaptations to heat, cold, humidity, extreme diet, water scarcity, mountainous terrain, dry environments and for general hardiness. More than just hamburgers, they autonomously harvest forage on marginal lands to produce 66 million tons of beef, 6.5 billion tons of milk, macro- and micronutrients, fibers, hides, skins, fertilizer and fuel; and are used for transportation, draft power, a source of income, and a form of banking for millions of smallholder farmers in developing countries. Even in developed countries, the products and ecosystem services produced by cattle extend well beyond milk and harvestable boneless meat. 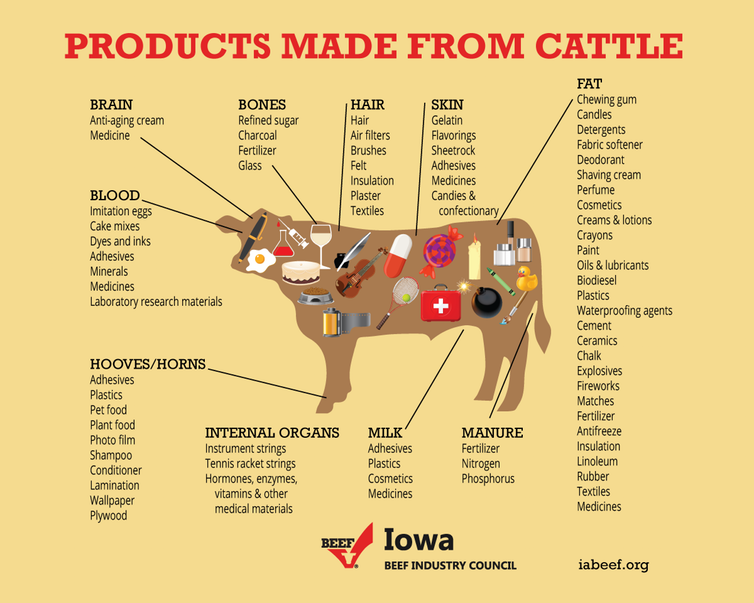 Land use per unit of beef varies significantly by region. It has been estimated that globally only 2 percent of the cattle population is produced in intensive feedlot systems, with the remaining 98 percent being produced on grassland-based grazing systems, or mixed crop and livestock systems. Grass and rangelands make up 80 percent of the 2.5 billion hectares of land used for livestock production, and most of this land is considered too marginal to be convertible to cropland.

Hypothetically removing ruminants from this non-arable land would mean that 57 percent of the land currently used for livestock production would no longer contribute to global food production. This does not consider the unintended impacts of removing grazing animals, which play an important role in maintaining healthy soil and grassland ecosystems. Rain, so-called “green” water as distinct to “blue” surface and ground water, would still fall on rangelands with no cattle, but it would generate no food. And ironically, it is this green rainfall that constitutes the vast majority of beef’s water footprint. Beef LCA documents large amounts of land and water, but does not reflect that rain falling on non-arable land has no alternative food production use.

Cultured meat, or whatever it ends up being called, may provide an additional source of protein to help meet projected future demands, and it may further appeal to consumers who choose not to consume conventional meat for ethical or other reasons.

However, framing cultured meat as “clean,” thereby unavoidably invoking dirty as the alternative, belittles the important role that ruminants play in global ecosystems and food security. Furthermore, I believe that overplaying the role that dietary choices actually play on GHG emissions in the U.S. distracts focus from reducing the much larger source of GHG from human activities—the burning of fossil fuels for electricity, heat and transportation.

Dr. Alison Van Eenennaam is a cooperative extension specialist in the field of animal genomics and biotechnology in the Department of Animal Science at the University of California, Davis.

Disclosure statement: Alison Van Eenennaam does not work for, consult, own shares in or receive funding from any company or organization that would benefit from this article, and has disclosed no relevant affiliations beyond her academic appointment.