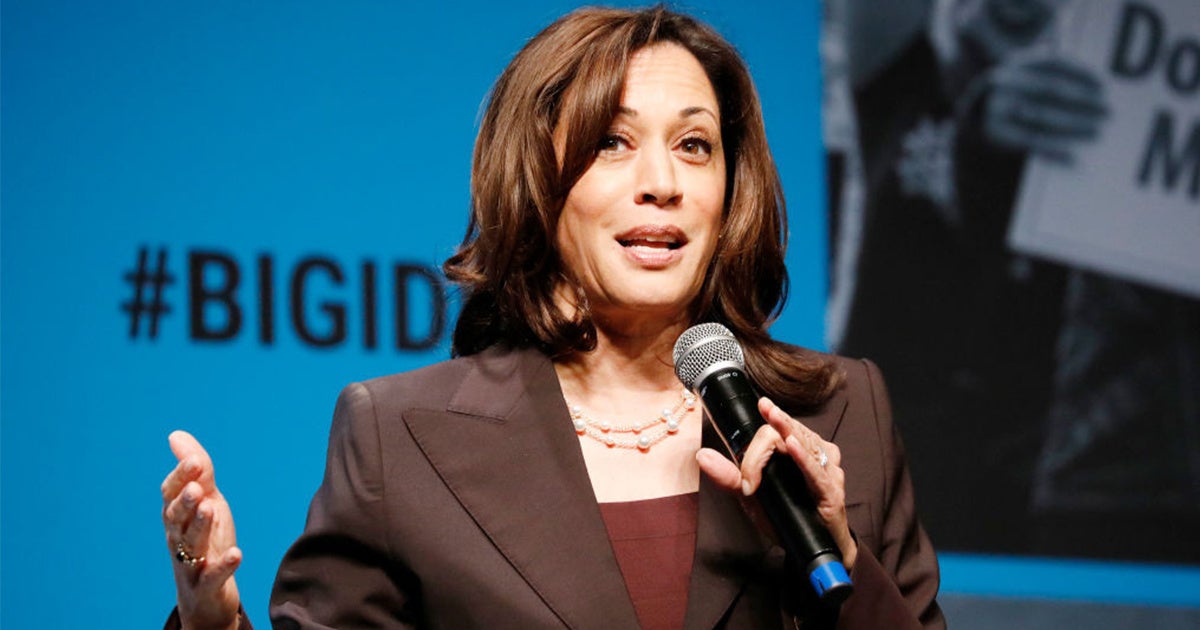 Harris was about to answer a question about her plan to address the gender pay gap when a male protester walked onto the stage, grabbed her microphone and began to speak.

“We’re asking for a much bigger idea than — ” he said before the microphone was cut and he was escorted off stage, POLITICO reported. He was not charged.

You can watch a video of the incident here:

The protester was later identified as Aidan Cook, an Oakland-based activist with the animal welfare group Direct Action Everywhere (DxE).

“I live in Oakland and I’m one of Kamala Harris’ constituents. I came to the MoveOn Big Ideas Forum today because there’s one big idea that all of the 2020 presidential candidates are ignoring. Which is that is by raising and slaughtering billions of animals every year, not only are we completely … undermining our values as a nation of compassionate animal lovers but we are literally preparing to drive our society off a cliff. Animal agriculture is one of the leading causes of climate change,” Cook told POLITICO of his actions. Agriculture and land use, including livestock raising and deforestation, are responsible for 24 percent of global greenhouse gas emissions, according to U.S. Environmental Protection Agency data.

DxE said in a press release that Cook’s interruption was timed with a San Francisco animal rights march Saturday. Cook wanted Harris to defend the rights of activists to rescue animals from factory farms. Specifically, six California residents are being charged with seven felonies each after attempting to rescue visibly sick chickens from Petaluma Poultry Farm in October 2018 and exposing conditions at the California facility, the group said.

“Progressive candidates should be advocating for vulnerable populations, not abusive corporations,” DxE co-founder and former Northwestern law professor Wayne Hsiung said in the release. “Families of ordinary Americans are being endangered, and whistleblowers who expose criminal violations are being targeted. The typical voter — especially in the Democratic Party — doesn’t approve, so we’re asking for the party to end its support for corporate Big Ag.”

Cook was roundly criticized for how he chose to draw attention to his cause. Several social media users pointed to the irony of a man interrupting a woman while she was discussing the gender pay gap, BBC News reported.

Guardian reporter Lois Beckett even asked Cook whether “he had considered the optics of literally taking the microphone away from women of color,” as the Huffington Post reported.

“I did,” he answered. “I tried to show my profound respect for each of the people onstage.”

Harris, who left the stage when Cook took her microphone, returned once he was removed as people began chanting her name.

“It’s all good. It’s all good. Don’t worry,” Harris said, POLITICO reported. “You had a question I want to answer,” she then said, addressing the moderator.

Harris isn’t the only candidate DxE criticized in their press release for failing to stand up to big agriculture. The group said that almost every Democrat including fellow candidates Vermont Senator Bernie Sanders, New Jersey Senator Cory Booker and Massachusetts Senator Elizabeth Warren had approved a 2018 Farm Bill that gave more than 0 billion in corporate subsidies to agribusiness. Warren also co-sponsored the 2018 Dairy PRIDE Act, which would prevent plant-based ‘milks’ from using the word ‘milk’ in their labeling, and Sanders has long supported corporate subsidies for large dairy farms, the group said.