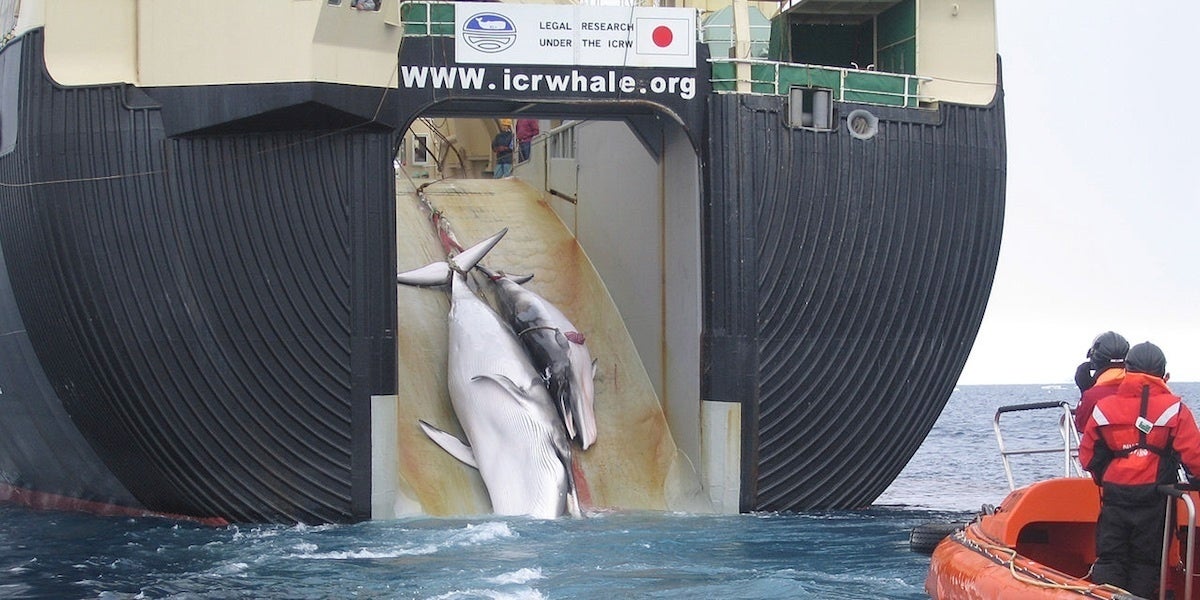 Japan is proposing a slew of rule changes at the International Whaling Commission (IWC) meeting in Florianópolis, Brazil this week that conservationists worry would ultimately lift a 1986 moratorium on commercial whaling.

Japan, which launched a “scientific whaling” program in 1987 as a loophole to the moratorium, has killed more than 15,600 whales in the Antarctic since the ban (including juvenile and pregnant minke whales), according to a report released last month by the Environmental Investigation Agency (EIA) and the Animal Welfare Institute (AWI).

Previous reports have revealed that the Japanese government has an ultimate goal to resume commercial whaling, even though most of its citizens no longer eat whales. Whaling proponents say that hunting the mammals is part of their culture.

Hideki Moronuki, Japan’s senior fisheries negotiator and commissioner for the IWC, told the
BBC that the country is pushing for the “the sustainable use of whales.”

Among its proposals, Japan wants to set up a “Sustainable Whaling Committee” which would create catch-quotas for nations wishing to allow their citizens to hunt healthy whale populations for commercial purposes, according to AFP.

Japan, which says minke and other whale stocks have recovered, will propose setting new catch quotas for species whose stocks are recognized as healthy by the IWC scientific committee.

Japan is also seeking to lower the proportion of votes required to set rule changes to a simple majority of the 89-member IWC, rather than three-quarters.

IWC meeting host Brazil is trying to rally other anti-whaling nations, such ads the European Union, Australia and New Zealand, to sign the “Florianópolis Declaration” that states commercial whaling is a no longer economically necessary and would allow the recovery of all whale populations to pre-industrial whaling levels, according to AFP.

Conservation groups have highlighted significant welfare concerns regarding “inhumane” time to death (TTD) rates after the whales are caught.

Whalers typically use an exploding harpoon to try to kill the animal “instantly”—defined by the IWC as within 10 seconds of being shot.

However, the report from EIA and AWI found that the hunted whales have suffered up to 25 minutes before dying:

Whaling opponents are urging the IWC to reaffirm its international moratorium on commercial whaling.

“If Japan gets its way, it would be a massive victory for those rogue whalers who have time and again defied the international ban on commercial whaling and an absolute disaster for the world’s whales,” said Clare Perry, EIA’s Ocean Campaigns leader in a statement received by EcoWatch.

“Many whale species have not yet recovered from massive overhunting in the past, and they are also facing a wide array of mounting existential threats ranging from climate change to marine pollution by chemicals, plastics and noise,” Perry added.

“We’re only just beginning to grasp the vital role whales play in maintaining the health of the world’s oceans,” O’Connell said. “Weakening the ban now would be a fatal mistake, and would open the doors to increased commercial whaling around the world. This cruel and unnecessary industry is a relic of the past that has no place in modern society.”

“All other contracting governments to the IWC must step up to vigorously defend the moratorium from this new assault by Japan and its allies,” O’Connell concluded.