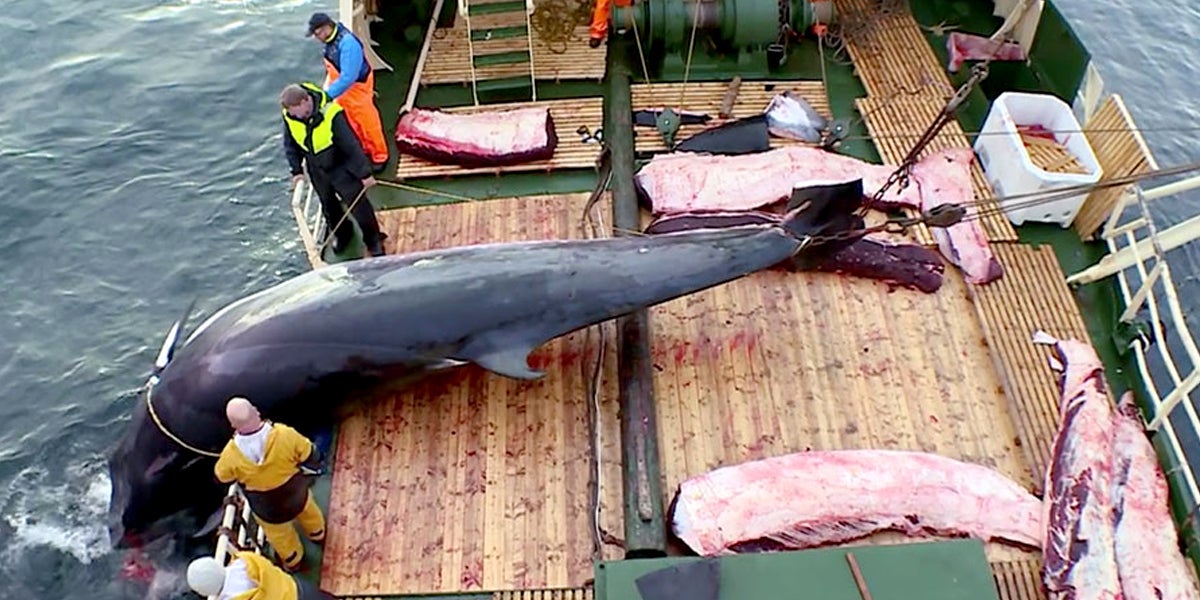 Ninety percent of the minke
whales hunted and killed each year in Norwegian waters are female and ”
almost all” of them are pregnant, according to a documentary aired earlier this month on NRK, a government-owned public broadcasting company.

The documentary,
Slaget om kvalen (“Battle of Agony”), shows grisly footage of Norway’s whaling industry, including one bloody scene where a fisherman cuts open a whale and removes its fetus.

The release of the documentary has sparked intense outcry from conservation groups in light of Norway’s long-standing objection to the International Whaling Commission’s (IWC) 1986 ban on commercial whaling.

“On the one hand because it’s in violation of an international ban but also because … it’s indefensible from the point of view of the animal’s well-being to hunt them during an advanced stage of gestation.”

The
estimated present population of minke whales is more than one million.

A 2016
joint report from the Animal Welfare Institute, OceanCare and Pro Wildlife found that in 2014 and 2015, Norway killed more whales than Japan and Iceland combined.

“We have a professional approach and therefore we don’t think about it,” said Dag Myklebust, the captain and harpoonist on the Norwegian fishing vessel Kato.

He added that the fact that they are pregnant “is a sign of good health,” Myklebust added.

An expert told NRK that the killing of pregnant animals is common.

“Lots of slaughtered animals are sent to the slaughterhouse when they are pregnant,” said Egil Ole Oen, a veterinarian who specializes in whale hunting.

Norway and Iceland are the only countries that continue to hunt whales despite the IWC’s moratorium. Japan also conducts whaling for “research” reasons.

Last year, Japan faced similar scrutiny after its whaling fleet came back with 333 dead minke whales, including 230 that were female and 90 percent of the mature females pregnant.

Animal rights groups remarked that the killing of pregnant whales is especially egregious because it affects the next generation.

“It is horrific to learn that such a high rate of the whales killed in Norway are female and pregnant,” OceanCare said in a statement to AFP.

“The whalers are not only killing the current but also part of the next generation of whales,” it added.

Astrid Fuchs, the program lead at
Whale and Dolphin Conservation said that “the revelations of the film are absolutely shocking.”

“Given the fact that a vast majority of the whales is pregnant, the minister’s proposed doubling of the quota would mean close to 4,000 whales could be slaughtered each year in European waters,” Fuchs
noted about Norway’s fisheries minister, Per Sandberg, who proposed to double the number of minke whales killed to nearly 2,000 and sell the meat to the European Union.

So how can you help stop this gruesome practice?

In an email to EcoWatch, Gulowsen of Greenpeace Norway suggested contacting the Norwegian Seafood Council (NSC) about your opposition to the slaughtering of pregnant minke whales. The state-owned NSC is the world’s largest generic marketing company for seafood and works to “safeguard” the Norwegian fisheries “positive image”—meaning they probably do not want the negative PR about its whaling industry.

“Although whale products are not exported, the seafood business is part of one large state/private operations, where they are all mutually responsible for each others practices,” Gulowsen pointed out.

The Animal Welfare Institute is also urging its supporters to write to Kåre R. Aas, Norway’s ambassador to the U.S., “to let him know that you are opposed to his country’s continued killing of minke whales” and to “encourage him to support responsible whale watching instead.”