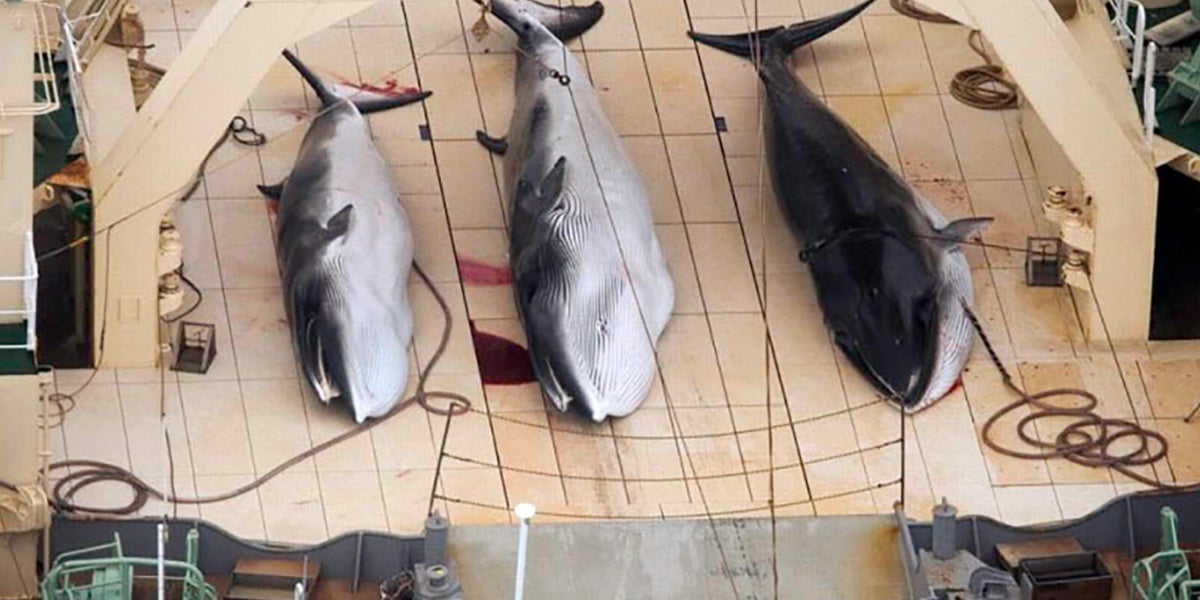 In defiance of international protests, Japanese whaling vessels returned to port with
another 333 minke whales on Saturday after its months-long hunt in the Southern Ocean Whale Sanctuary in Antarctic waters.

According to the
Japanese Institute of Cetacean Research, among the whales collected, 152 were male and 181 were female. About 60 percent of the males and 70 percent of the females were matured.

Japan plans to hunt about 4,000 whales over the next decade despite the International Whaling Commission’s (IWC) 1986 moratorium on commercial hunting. The country launched its “scientific whaling” program in 1987 as a loophole to the moratorium.

Its government insists that the marine mammals are killed in the name of research. “The purpose of this research is to carry out a detailed calculation of the catch limit of minke whales and study the structure and dynamics of the ecological system in the Antarctic Ocean,” the Fisheries Ministry
said after last year’s hunt.

However, Reuters noted that Japan’s ultimate goal is the resumption of commercial whaling. Japan insists that most whale species are not endangered and that eating whale is part of its culture, even though most Japanese people no longer eat it.

Conservation organization
Sea Shepherd has long opposed Japanese whaling in the Southern Ocean Whale Sanctuary and has sent ships since 2005 to intercept the hunts.

The group, however, did not send ships this year. Founder Captain Paul Watson told
Australian Broadcasting Corp in August that Japan is “using military technology. They have real-time satellite coverage of where we are. We cannot close in on them.”

“It’s a waste of time and money to go down there and not be able to achieve anything,” he added.

Watson is calling on international governments to do more to stop the slaughter of the whales.

“The illegal slaughter continues because the signatory nations of the IWC refuse to act. The United States, Australia, New Zealand and the European nations simply turn a blind eye to Japan’s continuing criminal activities in the waters off Antarctica. They have the power to stop it. Instead they choose to ignore it,” Watson said in a Facebook
post.

“Sea Shepherd will continue to monitor these Japanese crimes to watch for increases in the kill numbers and to research ways to counter superior Japanese surveillance technology,” he added.

Watson noted, “This season they murdered 333 Minke whales. If not for the previous decade of confrontations with Sea Shepherd that figure would now be 1,035 and would include 50 Humpbacks and 50 Fin whales.”

In another fiery statement, Sea Shepherd Australia Managing Director Jeff Hansen stated: “The Japanese whale poachers are in contempt of the Australian Federal Court with a million dollar price tag on their heads and found to be illegal by the International Court of Justice. Their new bogus scientific whaling program does not even have the backing from the International Whaling Commission.”

“Another 333 whales have been killed in Antarctic waters, while the Australian Government refuses to do anything to halt this illegal slaughter,” he continued. “Our Prime Minister has done nothing but ‘express disappointment’ over Japan’s continued whaling programme. The vast majority of Australians want action to end this abhorrent whale hunt, the Australian Government must not allow this to continue any longer.

“Legal options and the potential to send a vessel to intervene must be looked at in order to stop whaling occurring next summer,” Hansen said.