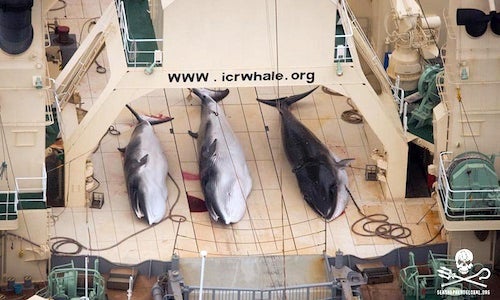 As part of its intention to kill nearly 4,000 whales in the Antarctic over the next 12 years as “scientific research,” Japan’s whaling fleet returned to port Thursday with 333 dead minke whales, including pregnant females.

According to Reuters, 103 of the slaughtered whales were male and 230 were female, with 90 percent of the mature females pregnant.

A press release from the Institute of Cetacean Research (ICR), the organization behind the Japanese government’s whaling program, includes a map showing the hunt occurred within the Southern Ocean Whale Sanctuary, the Australian Whale Sanctuary and the Ross Sea.

Japan’s Fisheries Agency resumed its whaling program in the Antarctic Ocean despite a landmark 2014 ruling from the International Court of Justice (ICJ), the the primary judicial branch of the United Nations.

Four of ICR’s survey ships have been in the Antarctic region since December. Photo credit: ICR

“Just a year and a half after the ICJ ruled Japan’s whaling program to be illegal, and just months after the Australian Federal Court ordered the whalers to pay a $1 million fine for illegally slaughtering whales inside the Australian Whale Sanctuary, the Japanese government has sanctioned yet another mass slaughter of protected Minke whales in the Southern Ocean,” Captain Alex Cornelissen, the CEO of Sea Shepherd Global, said in a statement earlier today.

“This rogue act is in blatant disregard of international law and diplomacy, and sets a dangerous precedent for all nations that respect the rule of law.”

According to the Australian Associated Press, “the Australian government has described Japan’s decision to resume whaling over the southern hemisphere summer as ‘deeply disappointing’ and says it has raised concerns at the highest level of the Japanese government.”

But Jeff Hansen, Sea Shepherd Australia managing director, said in a statement that “once again false promises from the Australian and New Zealand governments have resulted in whales being killed illegally in the Australian Whale Sanctuary.”

We call on @Trade_EU no #fta with #Japan as long as #whaling continues! https://t.co/UMmiMh4LEO pic.twitter.com/oeKzIujwFe

“The majority of Australians wanted the Australian government to send a vessel to oppose the slaughter. They did not,” Hansen continued. “Sea Shepherd requested that the Australian government release the location of the whalers. They refused. Instead, the governments responsible for protecting these magnificent creatures stood by, in the complete knowledge that both federal and international crimes were taking place. This empty response from authorities in the wake of the ICJ ruling is a disgrace.”

Captain Peter Hammarstedt, chair of the Sea Shepherd Australia board of directors, said:

Sea Shepherd was handicapped by the new ICR strategy of expanding their area of operations and reducing their quota, meaning that the time to locate them within the expanded zone made intervention extremely difficult with the ships that Sea Shepherd is able to deploy.

Sea Shepherd felt that this was an opportunity for the world’s government to demonstrate some resolve to uphold international conservation law. The Australia and New Zealand governments did nothing and this has served to illustrate that the only thing that has proven effective against the illegal Japanese whaling fleet has been the interventions by Sea Shepherd.

Sea Shepherd will soon have a fast long-range ship, and more importantly Sea Shepherd has something that the Australian and New Zealand governments lack and that is the courage, the passion and the resolve to uphold the law.

Reuters reported that Japan has long maintained that most whale species are not endangered and that eating whale is part of its culture despite most Japanese people no longer having a taste for the meat.

Its quite clear just how far #japans whale meat consumption has fallen yet Japan insist on killing whales #OpWhales pic.twitter.com/S8D0yFuyny