Is Outrage Over Monsanto Protection Act a Turning Point for the Food Movement? 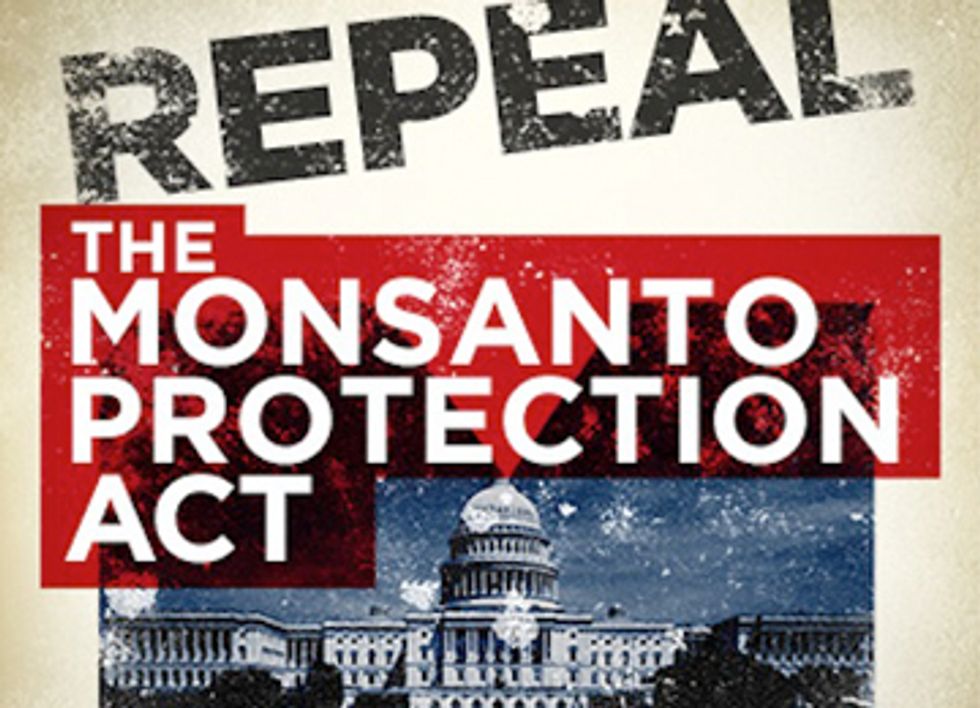 When I first wrote about how the biotech rider—called the Monsanto Protection Act by its vocal opponents—undercut the constitutional concept of separation of powers, it seemed hardly anyone was paying attention. But then a lot of people got mad, really mad.

Within a few short weeks the issue exploded in the mainstream media, with the surest sign the issue had hit the big time being coverage by The Daily Show. Another indication was outrage even from a Tea Party blogger.

Biotech companies have to get permission from the U.S. Department of Agriculture (USDA) to plant new genetically engineered (GE) crops. In recent years, groups such as the Center for Food Safety have been gaining traction by filing lawsuits challenging federal approval, thereby stopping some novel crops from being planted when courts agreed that the USDA failed to conduct proper environmental oversight.

Enter the biotech rider, an unprecedented end-run around such court decisions. The law—conveniently snuck into the must-pass budget bill—requires the USDA to ignore a court order and allow the planting of new GE crops while the agency conducts further review, after which time it’s likely too late to undo any harm. It would be like the Food and Drug Administration saying to food makers: go ahead and put those potentially dangerous food additives on the market while we keep studying them to see if they make people sick.

Despite political cynicism running at sky-high levels, this corporate power grab sent many people over the edge. But it didn’t happen by accident. It took hard grassroots efforts of groups like Food Democracy Now! to take this issue to its constituents, raise bloody hell over it, and demand accountability from our elected representatives, that got this story to break through.

The Iowa-based group—comprised of two staff—delivered more than 300,000 petitions of outrage to Washington, DC. They also started calling the measure the “Monsanto Protection Act”—a smart use of framing to get attention. Dave Murphy, executive director of Food Democracy Now! explains:

Republicans understand the importance of language—that’s why they say Obamacare and Clear Skies Initiative—but Democrats, not so much. I nicknamed the rider The Monsanto Protection Act as soon as I saw Congress calling it the Farmer Assurance Provision. As a former conservative, I know it’s important to tell the truth about what you’re really fighting.

In the noisy aftermath, even Monsanto’s hometown newspaper, the St. Louis Post-Dispatch, published a scathing editorial blaming Sen. Blount (R-MO) for “a sleazy bit of business” that “undermines the legislative process.”

That’s the good news: that when food industry lobbyists do something so over the top, we can marshal our resources to respond effectively. Even though we didn’t win that particular battle, the outrage over Monsanto’s colossal overreach did bring massive attention to the issue. And that message came through loud and clear both in the media and to some members of Congress.

Sen. Mikulski (D-MD), the Democrat chair of the Senate appropriations committee—where the rider was slipped in—put out a defensive apology in the wake of the uproar, a move unheard of by politicians. Her spokesperson tried to explain, “Senator Mikulski understands the anger over this provision. She didn’t put the language in the bill and doesn’t support it either.”

What classic politician-speak: defending her vote by saying she doesn’t support what she voted for. No matter, the statement alone points to the success of the backlash.

We’ve been hearing for some time now that the food movement needs to demonstrate some chops to gain more credibility, and I agree. We can’t just be a small collection of writers and polite foodies talking to each other. The only way to beat back a powerful industry is to prove we have enough people outraged over our broken food system to hold our politicians accountable. During his 2008 campaign, President Obama promised to fight for labeling of genetically-modified foods. But now—according to close sources—his attitude is: “show me the movement.”

With more than six million votes to label GE food in California for Prop 37, the ballot initiative that lost narrowly (48.6 to 51.4 percent) leading to the rise of at least 20 states considering labeling bills, combined with the recent outrage over the Monsanto Protection Act, it appears that movement has arrived.

Now it’s time for the next steps, and we have a critical opportunity with the farm bill, once again, making its way through Congress. Sen. Merkley (D-OR) has introduced with several co-sponsors an amendment to the farm bill that would completely repeal the biotech rider. From Sen. Merkley’s statement on his proposal:

The Monsanto Protection Act is an outrageous example of a special interest loophole. This provision nullifies the actions of a court that is enforcing the law to protect farmers, the environment and public health. That is unacceptable.

Unacceptable is right, to an outraged senator and hopefully millions of other Americans. Now is the time to demonstrate our strength. Enough is enough.