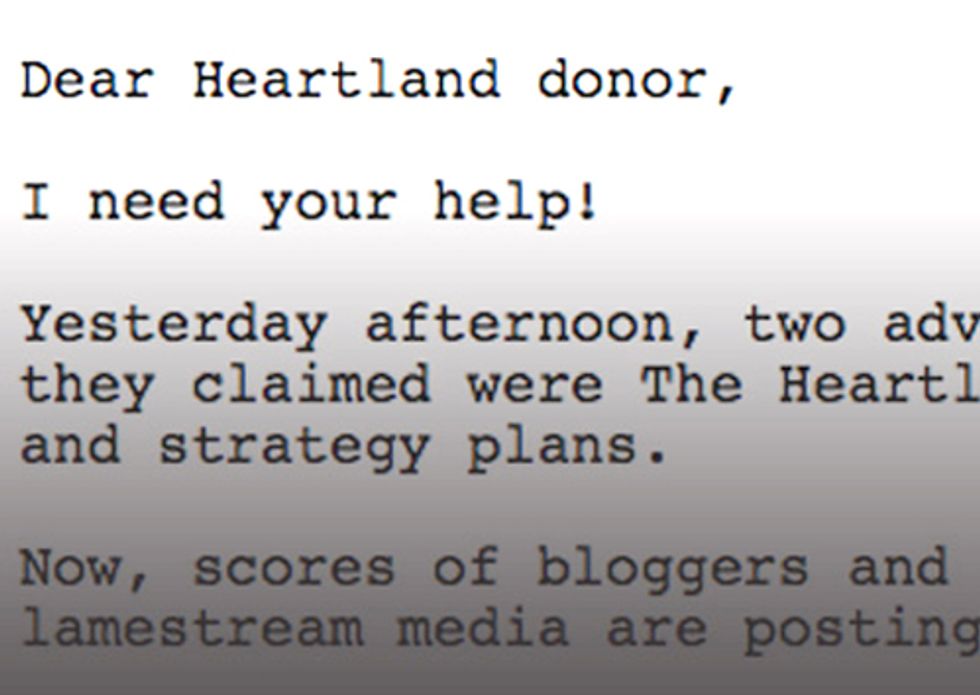 The climate skeptic think tank, the Heartland Institute, that last week was the victim of a devastating leak of information, has decided that attack is the best form of defense and has started threatening organizations and websites that published the leaked documents.

It is interesting to dissect how Heartland, which has been in crisis mode for a week now, has reacted to this scandal. And it smacks of hypocrisy.

Its first response was to argue that the authenticity of the documents had not been confirmed. It then argued that one of the most damaging documents—its leaked 2012 Strategy—was a fake “apparently intended to defame and discredit The Heartland Institute." This was a clear attempt to stop people from quoting from it.

The Heartland then “respectfully” asked “all activists, bloggers, and other journalists to immediately remove all of these documents and any quotations taken from them, especially the fake “climate strategy” memo and any quotations from the same, from their blogs, Web sites, and publications, and to publish retractions.”

In a section on the lessons learned it argued that “honest disagreement” over the causes of climate change “should never be used to justify the criminal acts and fraud that occurred in the past 24 hours. As a matter of common decency and journalistic ethics, we ask everyone in the climate change debate to sit back and think about what just happened.”

If Heartland had a track record of honestly portraying the science of climate change and not exploiting previous stolen information it might well have a leg to stand on. Instead we are dealing with an institute that is used to promoting climate denial and one that ruthlessly exploited the leaked emails from scientists, not just with the first leak in November 2009, but also the second leak at the end of last year.

Just check a short selection of some of their headlines:

So the hypocrisy and irony of Heartland asking people to refrain from using the documents has not been lost on seven scientists whose emails featured in “Climategate.”

In a letter published in the Guardian at the end of last week, the scientists wrote:

“As scientists who have had their emails stolen, posted online and grossly misrepresented, we can appreciate the difficulties the Heartland Institute is currently experiencing following the online posting of the organization’s internal documents earlier this week. However, we are greatly disappointed by their content, which indicates the organization is continuing its campaign to discredit mainstream climate science and to undermine the teaching of well-established climate science in the classroom.”

The letter continued—“Despite multiple independent investigations, which demonstrated that allegations against scientists were false, the Heartland Institute continued to attack scientists based on the stolen emails … So although we can agree that stealing documents and posting them online is not an acceptable practice, we would be remiss if we did not point out that the Heartland Institute has had no qualms about utilizing and distorting emails stolen from scientists.”

It also said—“We hope the Heartland Institute will heed its own advice to ‘think about what has happened’ and recognize how its attacks on science and scientists have helped poison the debate over climate change policy. The Heartland Institute has chosen to undermine public understanding of basic scientific facts and personally attack climate researchers rather than engage in a civil debate about climate change policy options.”

Rather than “thinking about what has happened” the Institute is now trying to gag websites  from using the information. It has sent legal notices to numerous Web sites, blogs and publications asking them to take down documents.

For once I agree with Heartland’s Joseph Bast when he writes, “We realize this will be portrayed by some as a heavy-handed threat to free speech.”

One of those whom has received a legal letter is of course DeSmogBlog, which leaked the original documents.

As Richard Littlemore from the blog notes—“Heartland Institute general counsel Maureen Martin has sent letters to the DeSmogBlog and several other publications demanding that we remove all Heartland-related documents that we posted on February 14, as well as all related commentary.”

So good on DeSmogBlog for not buckling under the pressure.

As they say, “We will leave them in place – in the public interest."