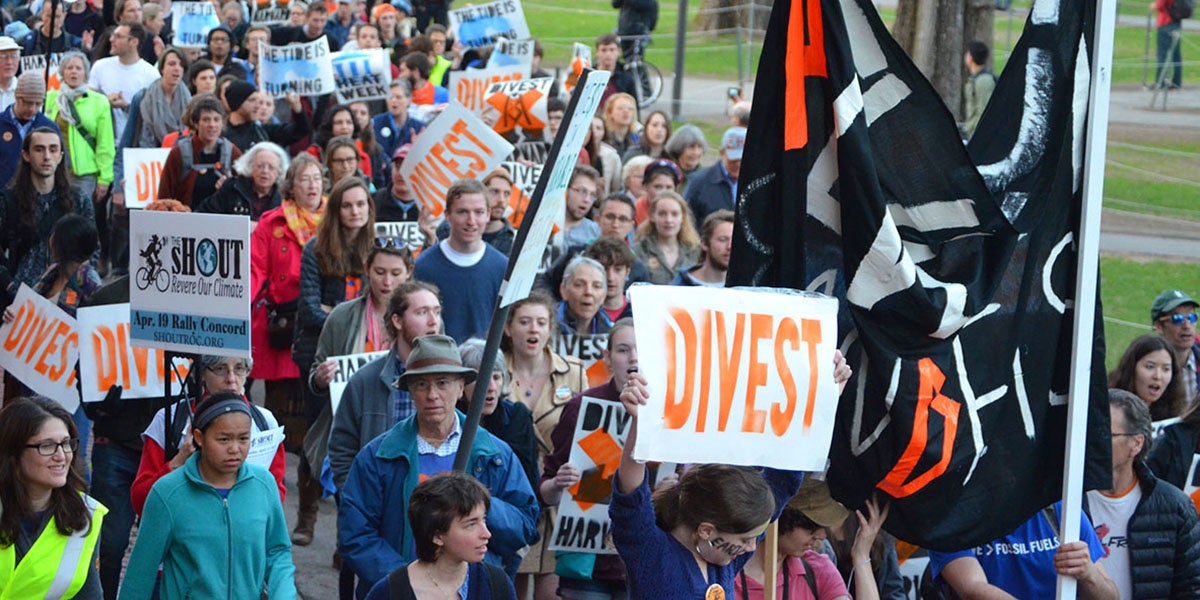 As a new academic year begins after a summer of deadly heat waves, wildfires, droughts and floods, many college students and faculty are debating whether and how to get involved in climate politics.

Climate advocacy has become well established on U.S. campuses over the past decade, in diverse forms. More than 600 colleges and universities have signed the American College and University President’s Climate Commitment. Schools are expanding interdisciplinary teaching and research in environmental studies, sustainability science and climate resilience, and investing in “greening” their campuses. And many activists on campuses around the country are participating in global campaigns like “Rise for Climate, Jobs and Justice” and “Keep it in the Ground.”

One of the most controversial strategies is campaigning for schools to divest their holdings in fossil fuel companies. Campus divestment is widely viewed as mainly a student cause. But when I analyzed the movement with Peter Frumhoff of the Union of Concerned Scientists and Yale (now Stanford) graduate student Leehi Yona, we found widespread faculty support for divestment. For example, in a survey at Harvard in spring 2018, 67 percent of faculty respondents supported divestment, while only 9 percent were opposed and 24 percent were neutral.

So far, however, only about 150 campuses worldwide have committed to fossil fuel divestment—and less than a third of those are in the U.S. Why so few? I see two reasons. First, divestment is controversial because it acknowledges the need for radical change. Second, there is a disconnect in institutional priorities between administrators on one side and faculty and students on the other side.

Fossil fuel divestment is intended to stigmatize the industry and hold companies accountable for opposing action to slow climate change and for their strategic misinformation campaign designed to confuse the public about climate science and the risks of climate change.

To date, more than 800 institutions with assets valued at more than $6 trillion have committed to some form of fossil fuel divestment. They include the Rockefeller Brothers Fund, the Guardian Media Group and the World Council of Churches.

New York City has set a goal of divesting its pension funds from fossil fuel companies by 2023. And in July 2018, the Irish parliament passed a bill making Ireland the first country in the world to divest from fossil fuels.

Check out our Open Letter to President Brown, who has rejected us 16 times. #DivestBU https://t.co/20nnjII7q5

Our analysis of campus support for divestment focused on 30 colleges and universities in the U.S. and Canada. We reviewed the number and type of faculty at these schools who had signed publicly available letters endorsing fossil fuel divestment. More than 4,550 faculty had taken such positions, representing all major disciplines and fields. They included 30 members of the National Academies of Sciences, Engineering and Medicine and two Nobel laureates. These findings suggest that faculty engagement in the divestment movement is broader than generally realized.

Faculty support reflects concern about fossil fuel companies’ negative influence in our political system, in our increasingly unequal economy and in public understanding of science. Faculty are also concerned about the industry’s direct influence over research and teaching within higher education.

A wide array of U.S. schools, ranging from large state universities to prestigious elite institutions such as Harvard and MIT, have received financial support from individuals or foundations whose wealth comes from fossil fuels. Many professors and students are concerned about how these relationships constrain campus research, inquiry and conversation about responses to climate change and the need for radical change in energy systems. 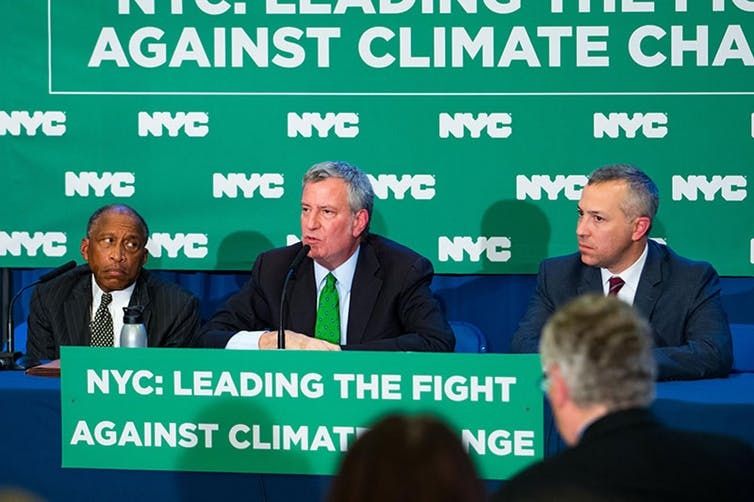 New York City Mayor Bill de Blasio announces on Jan. 10, 2018, that the city will seek to divest its pension funds from fossil fuel holdings by 2023. City of New York

So why have leaders at institutions like Harvard, Swarthmore and Middlebury resisted faculty and student calls to divest? Many administrators cite their fiduciary responsibility to maximize returns on endowment investments. However, a recent study that compared financial performance of investment portfolios with and without fossil fuel companies from 1927-2016 found that fossil fuel divestment did not reduce investment portfolio performance.

Administrators also often contend that their school’s investments should not be politicized. They say the endowment is not an appropriate lever for social change. But there is no such thing as an apolitical investment. Every investment does, in fact, influence change in one way or another. Many schools are now implicitly acknowledging this by developing guidelines for socially or environmentally responsible investing.

Senior administrators may also fear alienating important university constituents who are connected to the fossil fuel industry. They may feel a need to protect direct or indirect funding from fossil fuel companies for academic programs, or to maintain a non-threatening environment for board members with fossil fuel interests.

Higher education administrators also resist calls to divest because they recognize the potential for campus activists to call for divesting from other ethically challenged businesses, including tobacco and firearms. As social impact investing grows, it is not clear whether or how fossil fuel energy companies will be integrated.

Colleges and Universities as Citizens

The core missions of our institutions of higher education are to generate knowledge and educate citizens and leaders. Many schools also embrace a third role: addressing pressing social issues, whether through research and teaching or other strategies—for example, protecting undocumented students from the Trump administration’s aggressive enforcement of immigration law.

As disruptions linked to climate change become more intense, many faculty and students are asking why their schools are not explicitly incorporating their strategic societal priorities into financial decisions and investment portfolios. Under the Trump administration, standing up against misinformation about climate change takes on greater urgency.

That’s why I believe fossil fuel divestment raises important questions about the changing role and responsibilities of higher education in society. At this moment in human history, education must engage with how to bridge the gap between knowledge and action. Divestment debates are forcing colleges and universities to reconsider how to contribute to a more resilient and sustainable future.