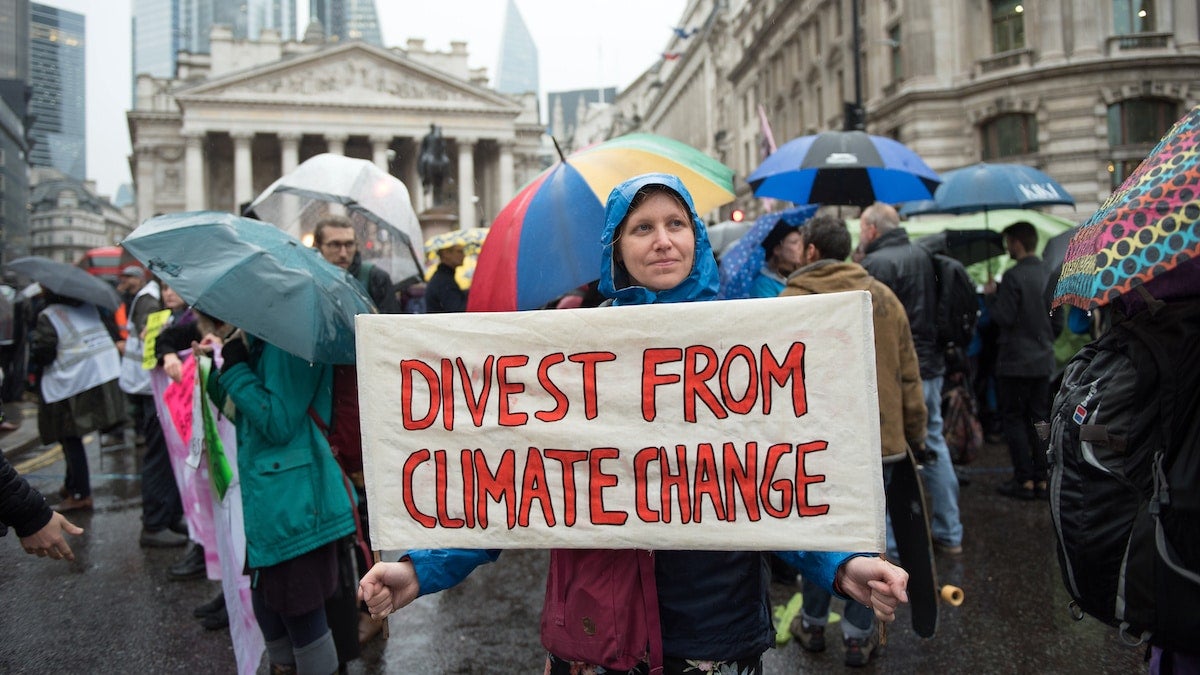 An Extinction Rebellion protester outside the Bank of England on Oct. 14, 2019 in London, England. John Keeble / Getty Images

In another win for climate campaigners, leaders of 12 major cities around the world — collectively home to about 36 million people — committed Tuesday to divesting from fossil fuel companies and investing in a green, just recovery from the ongoing coronavirus pandemic.

The announcement from C40 Cities — a global network of communities dedicated to tackling the climate emergency — came on day two of Climate Week NYC, some of which is being held online because of the COVID-19 crisis.

“In New York City, we know that taking action on climate change is not optional,” added de Blasio, whose community has been hit hard by the pandemic. “As we recover from COVID-19, we must make our cities even stronger.”

In 2018, de Blasio and London Mayor Sadiq Khan established the first-of-its-kind Divest/Invest Forum to help city leaders shift money away from fossil fuels and toward the creation of low-carbon jobs. Khan said Tuesday that his city has “demonstrated that divestment is possible and indeed essential for our future.”

“Through our work with New York and C40, I’m delighted to bring together 10 more cities to join us in taking Divest/Invest action,” he added. “As the world recovers from COVID-19, we need to work together to ensure a fairer, fossil-fuel-free green recovery.”

We are proud to be one of 12 cities around the world committing to @c40cities' declaration “Divesting From Fossil Fuels, Investing in a Sustainable Future”. Together, we can deliver a green and just recovery from #COVID19. #DivestInvest #TheFutureWeWant https://t.co/CstL7QbJwD pic.twitter.com/m8x9EGWA87

“We’re in a make-or-break decade for the preservation of our planet and our livelihoods,” said C40 chair and Los Angeles Mayor Eric Garcetti. “Our declaration makes a clear statement: If we’re serious about a sustainable, just, and prosperous future, we have to put our money where our mouth is, remove public dollars from companies harming the Earth, and power our cities with bold investments in low-carbon industries.”

Specifically, the mayors are committing to taking all possible steps to divest city assets from fossil fuel companies and increase investments in climate solutions; calling on pension funds to follow suit; and advocating for fossil-free and sustainable finance by other investors and all levels of government. A C40 statement called the declaration “a critical next step towards realizing the vision for a Global Green New Deal, announced last October at the C40 World Mayors Summit in Copenhagen, Denmark.”

The mayors’ latest move comes as western U.S. states including California battle unprecedented wildfires while the Gulf Coast recovers from Hurricane Sally and prepares for the possibility of more storms. Scientists have emphasized that both the intense blazes and slow-moving, destructive hurricanes are connected to global heating that results from human activity, especially the burning of fossil fuels.

“The declaration sends a loud clear message to the fossil fuel industry,” said 350.org executive director May Boeve, whose advocacy group has spearheaded demands for a green, just recovery. “As we watch wildfires burn in the U.S. and devastating floods in parts of Africa, we know that fossil fuels are not a safe investment: the sector is too volatile to be deeply vulnerable, it is time to divest from fossil fuels and invest in the green and just recovery of the future.”

Globally, over 0 billion in COVID-19 recovery funding has been pledged to fossil fuels. Boeve argued that “it is essential to ensure that today’s investments do not lock-in polluting technologies and carbon-intensive industries. Investments should instead support the solutions we need to avert climate breakdown, create good jobs, advance environmental justice, and support livable communities.”

Signatories to the C40 declaration agree. “Pulling out of climate-damaging and ethically problematic investment strategies is a key step in the transition to a sustainable economy,” said Michael Müller, governing mayor of Berlin. “The fact that C40 cities are taking this ambitious step and actively promoting divestment sends an important political signal.”

We’re live at #ClimateWeekNYC! Our “Cities Lead: Phasing Out Fossil Fuels” event is happening 2-3:30pm ET today. Follow along here as we hear from local leaders who are using regulatory policies to stop the growth of the fossil fuel industry. #SAFECities pic.twitter.com/LZmxUTS759