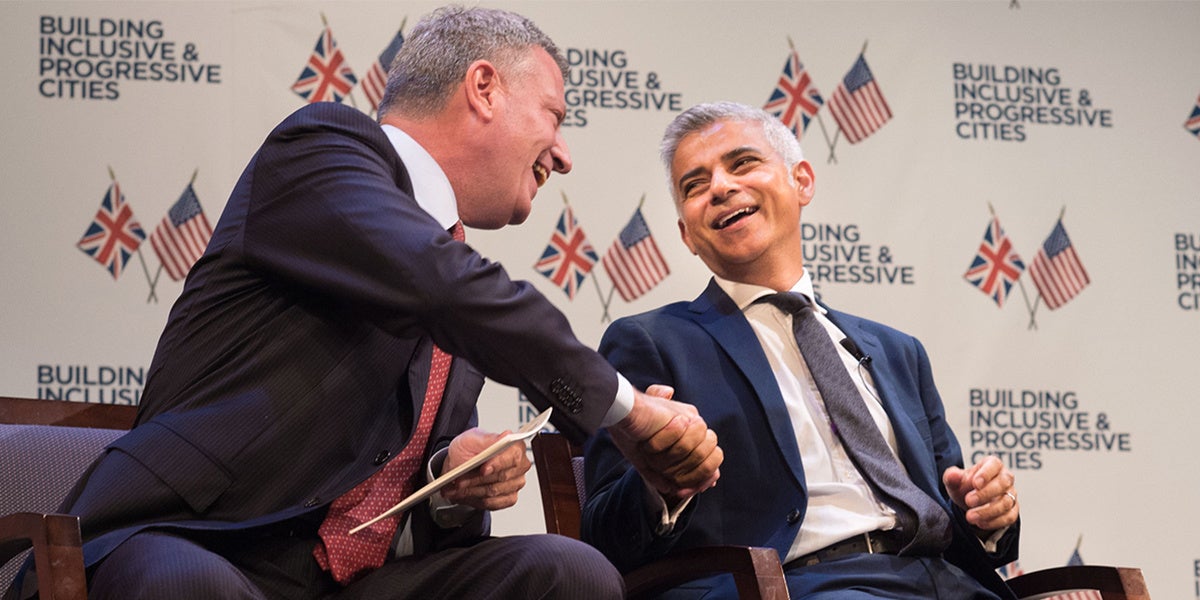 As regional, state, city and business leaders head to San Francisco for the Global Climate Action Summit Wednesday, New York City and London are stepping up as urban leaders on climate change.

In a joint statement published in The Guardian on Monday, New York City Mayor Bill de Blasio and London Mayor Sadiq Khan urged cities around the world to join them in divesting from fossil fuels.

“London and New York are two of the world’s most dynamic, innovative and forward-thinking cities, and we are determined to push ahead with the goals of the Paris agreement–stealing a march on many national governments,” the mayors wrote.

The mayors said that cities could take climate action in many ways, from improving the carbon footprint of transportation networks and buildings to making the switch to renewable energy, but that it was important that they use their economic power as well.

“We believe that ending institutional investment in companies that extract fossil fuels and contribute directly to climate change can help send a very powerful message that renewables and low-carbon options are the future,” they wrote.

The London Pension Fund Authority currently has less than two percent of its investments in fossil fuels. The authority shed £700,000 in fossil fuel investments this year, including in Shell and BP, and intends to divest from the rest of its fossil-fuel holdings, according to the letter.

New York City announced in January that it would divest its pension fund from fossil fuels. It will remove $5 billion from more than 190 companies.

The cities aren’t just issuing a single call—they are also working to coordinate the action it inspires.

They will co-chair the Cities Divest/Invest forum as part of the C40 Climate Leadership Group, helping cities share divestment experiences and knowledge, and advocating for divestment from greenhouse gas-emitting fuels and investment in clean energy.

In introducing their action call, the two mayors cited the unusual weather that has impacted both of their cities this summer.

“This summer it seemed as if our two cities had changed places. London was hot and dry while New York had days and days of rain,” the letter began.

The letter didn’t mention the storm by name, but its legacy was evident in its urgency.

“It’s clear that what we think of now as freak weather in our cities is likely to become the new normal, and that climate change poses a huge threat to the futures of our children, and many generations to come,” de Blasio and Khan wrote.