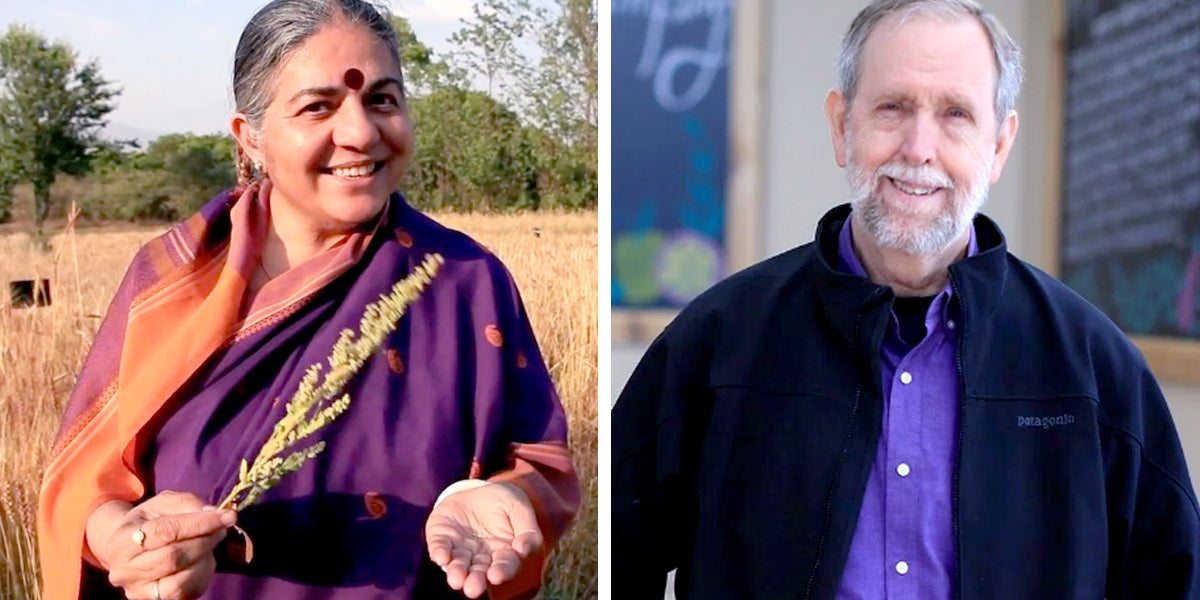 From authors to chefs, business owners to activists, this list is a collection of change makers in every industry working to fix inequalities and problems in the food system all over the world. Their examples have inspired movements and changed minds. We hope their stories and work will inspire you as much as it has inspired us here at Food Tank.

Scientist and activist Dr. Vandana Shiva is at the forefront of the sustainable food movement. Fighting against the spread of industrial agriculture, she believes high-yield production is hurting more than helping problems of nutrition and hunger in the world. Her non-governmental organization, Navdanya, has been a proponent of biodiversity since 1991 and is currently fighting the development of Golden Rice, a Vitamin A-rich variety, claiming it’s not as beneficial as it seems and could have a heavy impact on the environment.

The revolutionary Diet for a Small Planet was just the beginning of Moore Lappe’s contributions to changing the food system. Her contributions to building a sustainable food system since the book’s release in 1985 are numerous, including more books, academic positions and the founding of several organizations. Her most recent endeavor is the Small Planet Institute, an organization that hopes to inspire people around the world through its research on democracy, power, culture and food.

Rauch is connected to one of the most popular health foods stores in the U.S.—Trader Joe’s. After 31 years with the company, including 14 as President, Rauch left in 2008 and in 2012 he founded Daily Table. The not-for-profit store offers fresh produce, as well as healthy, to-go meals at affordable prices for a diverse and economically disadvantaged Boston neighborhood.

Bradshaw is the founder of Dreaming Out Loud and an advocate for an equitable food system. In DC’s most marginalized neighborhoods, Bradshaw introduced new concepts of healthy eating through West African cultural values and symbols. By instilling a sense of cultural belonging, the group hopes to empower communities to make more conscious decisions about health and provide more economic opportunities.

New solutions to food waste are popping up everywhere. Lizarondo’s 412 Food Rescue is a go-between for food retailers and community organizations in Pittsburgh, Pennsylvania. They aren’t a food bank; instead, they deliver fresh food that would otherwise be wasted to organizations that work with food-insecure populations. They fill a vital gap in the food production system. Lizarondo also writes about food and food policy at The Brazen Kitchen and for Pittsburgh Magazine.

Fresh garden produce was an important part of Stott‘s childhood and with the Food Literacy Center, she is fighting childhood obesity with her enduring love of veggies. To bring healthy eating habits to low-income neighborhoods, Stott and the literacy center teach nutrition and cooking classes where they aim to change the negative attitudes children have toward vegetables. Bringing them closer to the growing and cooking process is the first step.

Frison is plant pathologist at the cutting edge of research in agricultural biodiversity and its contribution to nutrition and the work of smallholder farmers. He is currently the chair of the International Scientific Committee of the Daniel and Nina Carasso Foundation and is a member of the International Advisory Board for the Svalbard Global Seed Vault.

With Richardson at the fore, the Global Alliance for the Future of Food strives for equity, sustainability and security in the food system. The alliance, where Richardson is executive director, focuses on the economics of food—how much do we really spend as a society on food—and advocates for solutions to our lopsided system. “I cannot stress enough how important it will be to our future well-being to fix the economic distortions in the food system,” Richardson told Food Tank.

Masumoto recently assumed the responsibility of her family’s 80-acre organic peach farm in California. But she’s more than just a farmer. She calls herself an “agrarian artist” and last year she published her second book, Changing Season: A Father, A Daughter, A Family Farm, in which she shares her story and experiences as a queer, mixed-race woman in the industry. A gifted speaker, she offers a new vision for a radically changed and more open farming landscape through her work as farmer, woman, artist and activist.

Mukiibi is an agronomist from Uganda and vice president of Slow Food International since 2014. He learned early on that something wasn’t working for the farming communities he worked with in his country. As a student in Kampala, he found the modern agronomy practices ignored many of the traditional methods and crops with which small-scale farmers were familiar. He eventually discovered the Slow Food movement and started a convivium to connect people and share information about crop diversity and traditional farming knowledge. His current project is to create 10,000 food gardens in Africa.

Touted as a “Champion for Change” by the White House, Shute is a farming revolutionary. Her family farm, Hearty Roots, is part of a Community Supported Agriculture program. Members support the work of the farm in growing organic produce and in return receive access to its freshest products as well as other benefits of its work and location. She is a proponent of young farmers’ influence on the future of farming and as such, she started the National Young Farmers Coalition.

It might seem difficult to find a straight line between Diniz’s former career as a Formula 1 racing driver and his current role as an organic farmer and agroforester. But the link is in the land of his family, on which he currently operates a 2,300 hectare organic produce and dairy farm, Fazenda da Toca, alongside his wife Tatiana Diniz. The operation is a major influence on the environmental stage in São Paulo state and in Brazil. The farm shares its mission to revolutionize agriculture through sustainable cultivation at its on-site learning center, Instituto Toca.

Environmental economist Sukhdev sees a green future, green in its health and wealth. He was the special adviser and head of United Nation’s Environment Program’s Green Economy Initiative and study leader for the Economics of Ecosystems and Biodiversity study from G8+5, which looked to place a financial value on what we gain from nature and more specifically, its biodiversity. “I began my life as a markets professional and continued to take an interest, but most of my recent effort has been looking at the value of what comes to human beings from nature and which doesn’t get priced by the markets,” he said in his TED talk from 2011.

Miraci Pereira Silva is an organic farmer from the Roseli Nunes settlement in western Brazil. For years, members of her community have grown crops, such as lettuce, beans and papaya to sell locally. But their land is increasingly threatened by encroaching biofuel-linked sugarcane farms and their use of pesticides.

Miranda assumed the role of feminist leader as a student in Tegucigalpa, where she also worked with women in poverty. She is of the Garifuna, an indigenous community in Honduras who have been forced off land by land grabs and resort development. The Black Fraternal Organization of Honduras, of which Miranda is coordinator, are fighting legal battles against the state for protection of their land and rights. Despite threats on her life and even being kidnapped once, she strides forward in the fight for her people.

Geum-Soon is a farmer in South Korea and president of the Korean Women’s Peasant Association, which seeks to empower South Korean women farmers. She is an unwavering advocate for thousands of women in communities with high rates of domestic abuse and a lack of female control over the land despite their contributions to cultivation. The association seeks to improve agricultural policies, bring back seed diversity and provide gender equality education programs.

Southern-Mississippi farmer Ben Burkett knows what it takes to keep a farm afloat in the deep south. While managing his family’s four-generation old vegetable farm, he also serves as an advocate for several communities in the region. As president of the National Family Farm Coalition and director of the Mississippi Association of Cooperatives, he supports underserved black farmers, family farms and cooperative farming, a necessity for small-scale farmers in the south, he said. In 2014, he was awarded the James Beard Foundation Leadership Award.