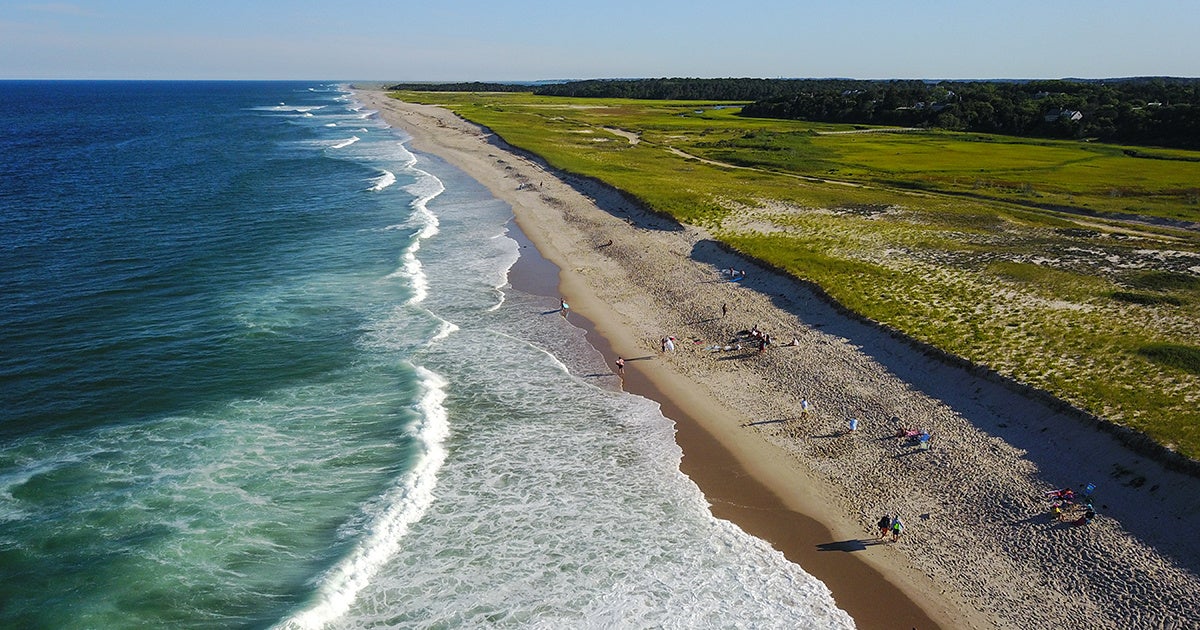 Waves from the Atlantic Ocean crash against a scenic beach on Cape Cod, Massachusetts. This sandy peninsula is a popular summer vacation destination and is also known for its many Great White sharks. Velvetfish / iStock / Getty Images

On a sunny Saturday in mid-September, 26-year-old Arthur Medici was boogie-boarding in the waves off Wellfleet, Massachusetts, when a great white shark bit his leg. Despite the efforts of a friend who pulled him ashore and the paramedics who rushed him to the hospital, Medici died from his injuries. It’s about as tragic a story as you can imagine: a young life cut short due to a freak run-in with a wild animal.

Medici is the first person to die from a shark bite on Cape Cod in 82 years. (Another incident, which occurred in nearby Truro in August, was not fatal.) Medici’s death is also this year’s only shark-bite fatality in the U.S. and one of just five reported worldwide in 2018. All of which is to say, it’s still extremely unlikely for a human to be killed by a shark. Statistically speaking, you are much, much more likely to be killed by bees, lightning or government execution.

Still, in the wake of Medici’s death, some local officials are calling for a cull—but not of sharks. They want to go after gray seals, the sharks’ prey.

Seals have inhabited Cape Cod for some 4,000 years, but for the past century or so, they’ve been scarce in this part of the world. New England fishermen in the 19th century saw the animals as competition for their cod harvest and killed as many as 135,000 of them between 1888 and 1962. Hard to believe, but the Massachusetts government offered a $5 bounty for every seal nose produced as recently as the 1960s. Not so surprisingly, gray seals nearly disappeared from the area around that time.

In 1972, the Marine Mammal Protection Act made killing gray seals and other marine mammals illegal, and since then, the Cape’s seal population has rebounded to as many as 50,000. In addition to the seals being part of the Cape’s food web, evidence suggests that the animals play a role in transporting nitrogen and other nutrients out of the sea and onto shore via their excrement.

The thing is, now that the seals are back, so are the sharks.

While shark sightings have risen in recent years, experts say it’s not because shark populations have experienced a boom, said Carlos Garcia-Quijano, an environmental anthropologist at the University of Rhode Island. It’s because the sharks we do have are spending more time around the Cape—where the seals are.

A Massachusetts state shark scientist, Gregory Skomal, has been tagging white sharks for years now in an attempt to find meaning in their movement patterns. He said the predators seem to be reacting more to what the seals do than anything else. “I can study the heck out of sharks, but I really need more data on what the seals are doing,” Skomal told the Cape Cod Times last year.

Medici’s death makes it difficult to ignore the fact that the gray seal conservation success story has increased the presence of great white sharks. Garcia-Quijano has been talking to people all over Cape Cod in an attempt to better understand how communities process this kind of event and how they are interacting with wildlife in general.

For Garcia-Quijano, business owners have the most interesting relationship with sharks and seals because both can “attract and also have the potential to repel tourism.” Tourists will have a different take on the local charismatic megafauna than people who live on Cape Cod year-round. And fishermen’s concerns do not always coincide with those of national park employees or conservationists whose job it is to uphold laws that protect wildlife. What surprised Garcia-Quijano is that nearly everyone he spoke to from those groups are opposed to the idea of a shark cull.

The seals, however, aren’t getting as much love. “It’s not everybody,” said Garcia-Quijano. “And I wouldn’t even say the majority, but there is certainly a vocal minority of Cape Cod residents I talked with who have been mad at the seals for a while.”

For starters, these mammals spend a lot of time on shore and, well, when they’ve gotta go, they’ve gotta go. All that nitrogen has to be deposited somewhere, after all. Seal feces is definitely stinky (the animals eat fish, remember), but some people claim (falsely) that large herds can contaminate the water. Even though scientific research refutes this, public perception isn’t always based on fact.

Some fishermen don’t like seals because they believe the whiskered predators steal fish off lines and out of gillnets and even break into lobster pots to dine on crustaceans. There’s no good scientific evidence to suggest whether seals actually do this, said Garcia-Quijano, but again, the perception that they do is strong.

And despite solid scientific evidence that shark culls do not reduce shark–human encounters, there are, of course, a few Cape Cod residents who want to go the Jaws route. To catch sharks, Barnstable County Commissioner Ron Beaty would like to line the beaches with baited hooks attached to buoys—in other words, to create indiscriminate killing machines.

So, is any kind of cull in the works? In a word, no. As marine mammals, gray seals are protected by the federal government. And federal and state regulations make it illegal to possess, sell, or purchase great white sharks or their parts.

Of course, protections can be given and they can be taken away. Just look at the gray wolf, which was added to the endangered species list in 1974, and then delisted and re-listed numerous times over the course of the next four decades. And while Congress has failed to repeal the Marine Mammal Act in the past, that doesn’t mean it won’t keep trying.

Ultimately, Garcia-Quijano said Cape Cod has neither a shark problem nor a seal problem. “You’re dealing with a people problem,” he said. “This is all a people process—people making decisions about what their ecosystem is going to look like.”