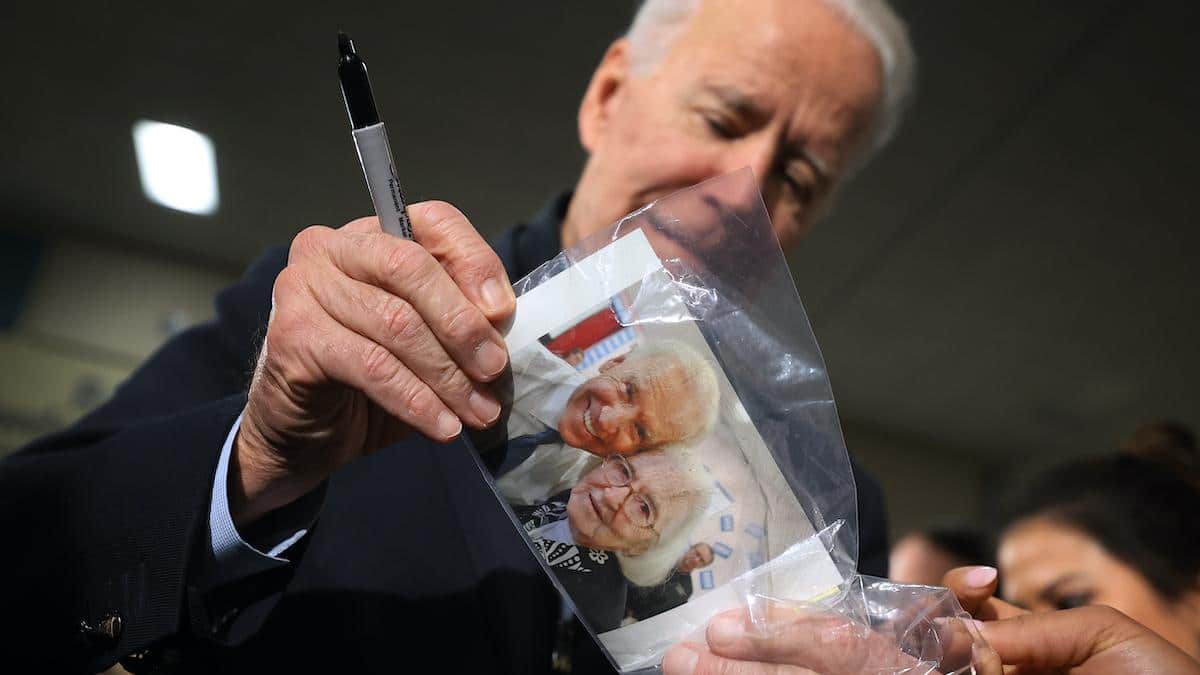 Joe Biden pulls a photograph of himself and a supporter out of a plastic bag before signing it during a campaign event at Western Iowa Tech Community College on Jan. 29, 2020 in Sioux City, Iowa. Chip Somodevilla / Getty Images

A large and diverse coalition of over 550 organizations came together Tuesday to call on President-elect Joe Biden to tackle the plastic pollution crisis through executive actions that would collectively help turn the tide against consumer waste that is choking the planet’s natural world and harming human health.

“More than 99% of plastic is created from chemicals sourced from fossil fuels, including an oversupply of fracked gas, which is spurring a global boom in new plastic production. That plastic is causing serious environmental problems at every step of its lifecycle,” the groups point out, explaining the need for action.

In addition to the 10 steps previously proposed by advocacy organizations urging Biden to lead as a #ClimatePresident, the coalition behind the new call is pushing him to become the first #PlasticFreePresident by embracing their Presidential Plastics Action Plan.

“President-elect Biden can begin solving the plastic pollution crisis in his first days in office without any help from Congress,” noted Julie Teel Simmonds, a senior attorney at the Center for Biological Diversity, a member of the #BreakFreeFromPlastic movement and a convening partner of the action plan.

“Implementing this historic plan would protect vulnerable frontline communities and marine life while addressing a key driver of climate change,” she said. “It’s time to rein in the fossil fuel industry’s insidious plans to keep fracking for plastic and polluting poor communities here and around the world.”

The plan urges the incoming Biden administration to:

Each broad recommendation comes with specific suggestions. As part of the effort to eliminate single-use plastic, the coalition proposes appointing a plastic pollution czar to coordinate reduction efforts across federal agencies and internationally. To make corporate polluters pay, the plan pressures Biden to throw his support behind the historic Break Free From Plastic Pollution Act unveiled in Congress earlier this year.

“Plastic production and pollution impact public health, the environment, and climate, and it has reached crisis levels around the world, with the United States as one of the biggest contributors,” Rep. Alan Lowenthal (D-Calif.) said Friday, explaining why he introduced the bill — with Rep. Katherine Clark (D-Mass.) as well as Sens. Tom Udall (D-N.M.) and Jeff Merkley (D-Ore.) — and vowing to reintroduce it in the next congressional session.

“The Presidential Plastics Action Plan lays out how the incoming Biden administration can lead on this plastic waste issue and enact real solutions like updating important regulations and greater cooperation with the international community,” Lowenthal said. “We are running out of time to deal with this crisis, but our bill and the Presidential Plastics Action Plan are important approaches to put us on the right track moving forward.”

We need to #BreakFreeFromPlastic, and that means making sure the big manufacturers generating massive amounts of waste carry the financial burden— not the taxpayers. Read more: https://t.co/ZSTB6n6tuH

Noting petrochemical industry plans for more than 300 new projects over the next decade, the coalition pushes the incoming president to direct federal agencies to deny permits for building or expanding refineries, ethane crackers, pipelines, natural gas liquid storage facilities and hubs, import and export terminals, and other related infrastructure.

In its demand for advancing environmental justice, the plan acknowledges that “petrochemical companies continue to locate new and expanded plastics facilities near existing fossil fuel infrastructure, which means they are targeting the Gulf Coast, Appalachia, the Ohio River Valley, and other communities that already shoulder a heavy burden of oil, gas, and plastic industry pollution.”

One of these hubs is the so-called Cancer Alley, an industrial stretch of Louisiana that runs along the Mississippi River that is the site of a multibillion petrochemical complex that Taiwan-based Formosa Plastics Group intends to build despite objections and health concerns from community members.

Sharon Lavigne, founder and president of the group RISE St. James, is helping to lead the local fight against Formosa’s plans for the plant. She is also a supporter of the plastics plan targeting the next administration.

“If the Formosa Plastics complex is built, it would be a death sentence for St. James Parish. We already have so many people dying here, mostly from cancer, and others with terrible reproductive issues. If the petrochemical buildout continues, we won’t be able to breathe the air and we will die,” said Lavigne. “We are asking the Biden administration to consider the lives of the people here in St. James Parish and take action to protect us.”

Backers of the action plan want Biden to not only aid communities across the country impacted by plastic pollution and industry but also to address the crisis on an international scale. As Common Dreams reported last month, under President Donald Trump, the U.S. government has been in a small minority of United Nations member states signaling it is unwilling to participate in a global treaty on the issue.

Carroll Muffett, president of the Center for International Environmental Law, another convening partner of the plan, said that “President-elect Biden should commit the United States to actively support a new global treaty on plastic pollution; use U.S. trade power to support real development, not plastic polluters; and move quickly to reverse U.S. subsidies and export policies that are accelerating the plastic crisis globally.”

Plastic is an environmental nightmare. Yet the fossil fuel industry plans to increase plastic production by 40% over the next decade. We demand US President elect @JoeBiden take urgent action against plastic pollution.