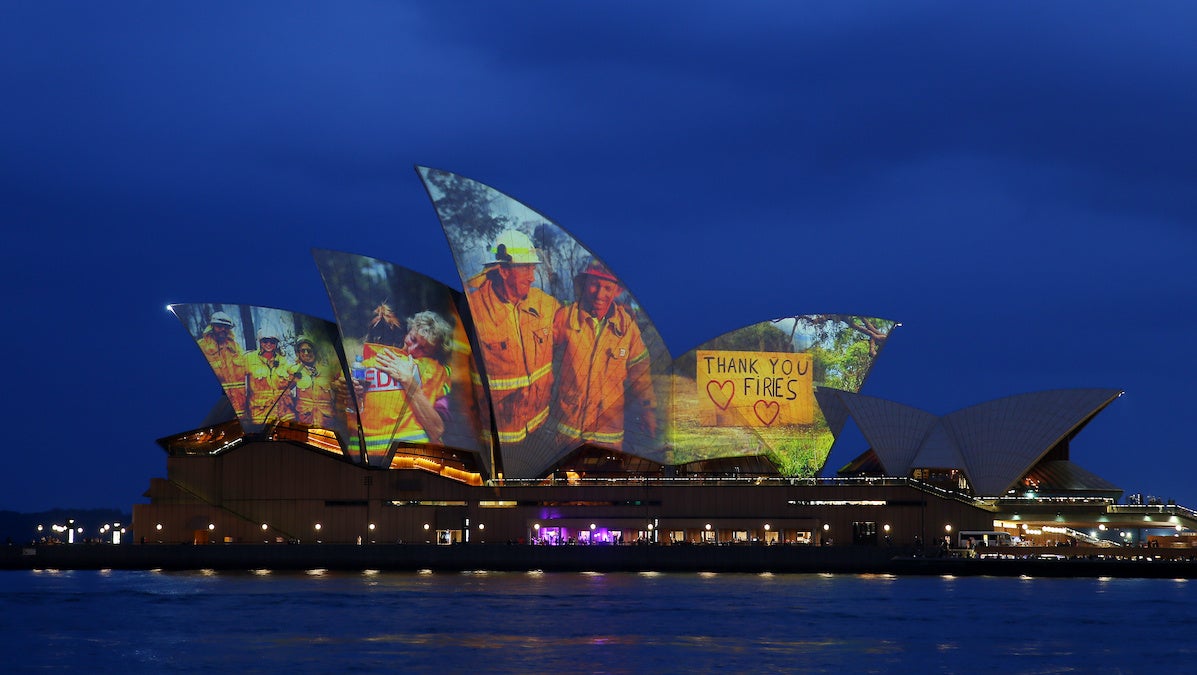 Images taken during the bushfire crisis are projected on the sails of the Sydney Opera House on Jan 11, 2020 in Sydney, Australia. Don Arnold / Getty Images

After a “devastating” wildfire season, all of the bushfires in Australia‘s most populous state of New South Wales (NSW) are now contained.

NSW was the state hardest hit by Australia’s historic fire season, according to BBC News. Fires across the country killed at least 33 people and more than a billion animals, torched thousands of homes and impacted an area roughly the size of England.

“After what’s been a truly devastating fire season for both firefighters and residents who suffered through so much this season, all fires are now contained in New South Wales, which is great news,” NSW Rural Fire Service Deputy Commissioner Rob Rogers said Thursday in a video reported by NPR.

In what has been a very traumatic, exhausting and anxious bush fire season so far, for the first time this season all bush and grass fires in NSW are now contained.
It has taken a lot of work by firefighters, emergency services and communities to get to this point. #nswrfs pic.twitter.com/RhqmcYhJ1j

The climate crisis has made Australia’s naturally occurring fire season more extreme, as record temperatures combined with an extended drought to fan the flames. In NSW alone, fires destroyed more than 2,400 homes and burned 13.3 million acres of land, NPR reported.

But the heavy rain that has helped to finally douse the flames may also have been supercharged by climate change. An Australian Bureau of Meteorology (BOM) study published in 2017 found that the climate crisis was already making both drought and flooding more likely in the Pacific.

The wild weather has delivered a rare sight in Sydney; an overflowing spillway. The Nepean Dam is over capacity as Sydney dam totals crack 75% for the first time in close to two years – and there's more rain on the way. https://t.co/TWh1KQycs4 #7NEWS pic.twitter.com/HQhZIFPsoa

Flash flooding in Queensland reportedly led to the death of one 75-year-old man, according to BBC News. And NSW State Emergency Services answered 2,500 calls for help because of rain in a 24-hour period, NPR reported.

The rains are expected to continue over the weekend, with more storms forecast to hit NSW and Queensland.

“Any showers and thunderstorms that do develop are falling on already saturated catchments, so there is a risk with severe thunderstorms of flash flooding,” senior BOM meteorologist Grace Legge told AFP.

However, for many the rains are welcome. They extinguished the Currowan and Gospers Mountain fires, which burned about 500,000 hectares each, according to BBC News. The rain also finally snuffed out the Lindfield Park Road Fire, which had burned for 210 days.

The good news just keeps rolling in!
The Lindfield Park Road Fire, which has been burning in the Port Macquarie region for 210 days, has today been declared out. The fire burnt through 858 hectares and 400 of that being peat soils under the surface. #nswrfs #nswfires pic.twitter.com/Alcx7rKyVT

The rain has also been a boon to agriculture. 2019 was the driest year in 101 years for the Hunter Valley, an important wine region. One winemaker said that the six inches of rain that fell during the week’s downpour were enough to refill their vineyard’s dams, The New York Times reported.

Fires in Victoria are still burning, but in other parts of the state, nature is starting to recover. Parks Victoria tweeted images of green shoots poking up through fire-blackened landscapes Thursday.

Green shoots provide hope. Parks across East Gippsland and North East Victoria have been seriously affected by fire. While fire is still an issue, mother nature is already slowly starting to regenerate in some areas. pic.twitter.com/WMLPhnIxal

“This fire season has burnt more rainforest – which does not recover well from fire – than any fire in recent memory,” Parks Victoria wrote. “Therefore, all remaining vegetation now takes on extra significance and we must take care of the precious remnants that we still have.”