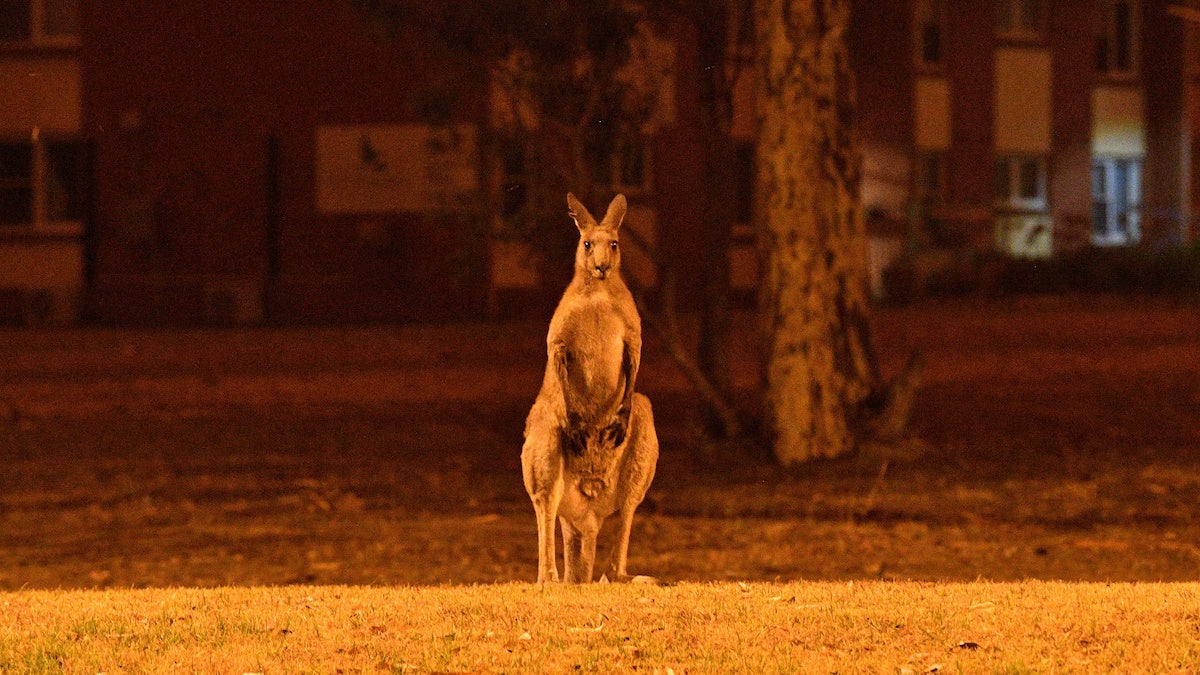 A kangaroo tries to move away from nearby bushfires at a residential property near the town of Nowra in the Australian state of New South Wales. SAEED KHAN / AFP via Getty Images

Ecologists at the University of Sydney are estimating that nearly half a billion animals have been killed in Australia’s unprecedented and catastrophic wildfires, which have sparked a continent-wide crisis and forced tens of thousands of people to flee their homes in desperation.

News Corp Australia reported Wednesday that “there are real concerns entire species of plants and animals have been wiped out by bushfires following revelations almost 500 million animals have died since the crisis began.”

“Ecologists from the University of Sydney now estimate 480 million mammals, birds, and reptiles have been lost since September,” according to News Corp. “That figure is likely to soar following the devastating fires which have ripped through Victoria and the [New South Wales] South Coast over the past couple of days, leaving several people dead or unaccounted for, razing scores of homes and leaving thousands stranded.”

The horrifying figures come as images and videos of animals suffering severe burns and dehydration continue to circulate on social media.

Mark Graham, an ecologist with the National Conservation Council, told the Australian parliament that “the fires have burned so hot and so fast that there has been significant mortality of animals in the trees, but there is such a big area now that is still on fire and still burning that we will probably never find the bodies.”

Koalas in particular have been devastated by the fires, Graham noted, because they “really have no capacity to move fast enough to get away.”

As Reuters reported Tuesday, “Australia’s bushland is home to a range of indigenous fauna, including kangaroos, koalas, wallabies, possums, wombats, and echidnas. Officials fear that 30 percent of just one koala colony on the country’s northeast coast, or between 4,500 and 8,400, have been lost in the recent fires.”

Australia’s coal-touting Prime Minister Scott Morrison has faced growing scrutiny for refusing to take sufficient action to confront the wildfires and the climate crisis that is driving them. Since September, the fires have burned over 10 million acres of land, destroyed more than a thousand homes and killed at least 17 people — including 9 since Christmas Day.

On Thursday, the government of New South Wales (NSW) declared a state of emergency set to take effect Friday morning as the wildfires are expected to intensify over the weekend.

“We’ve got a lot of fire in the landscape that we will not contain,” said Rob Rogers, deputy commissioner of the NSW Rural Fire Service. “We need to make sure that people are not in the path of these fires.”