Pesticides Are Killing off the Andean Condor 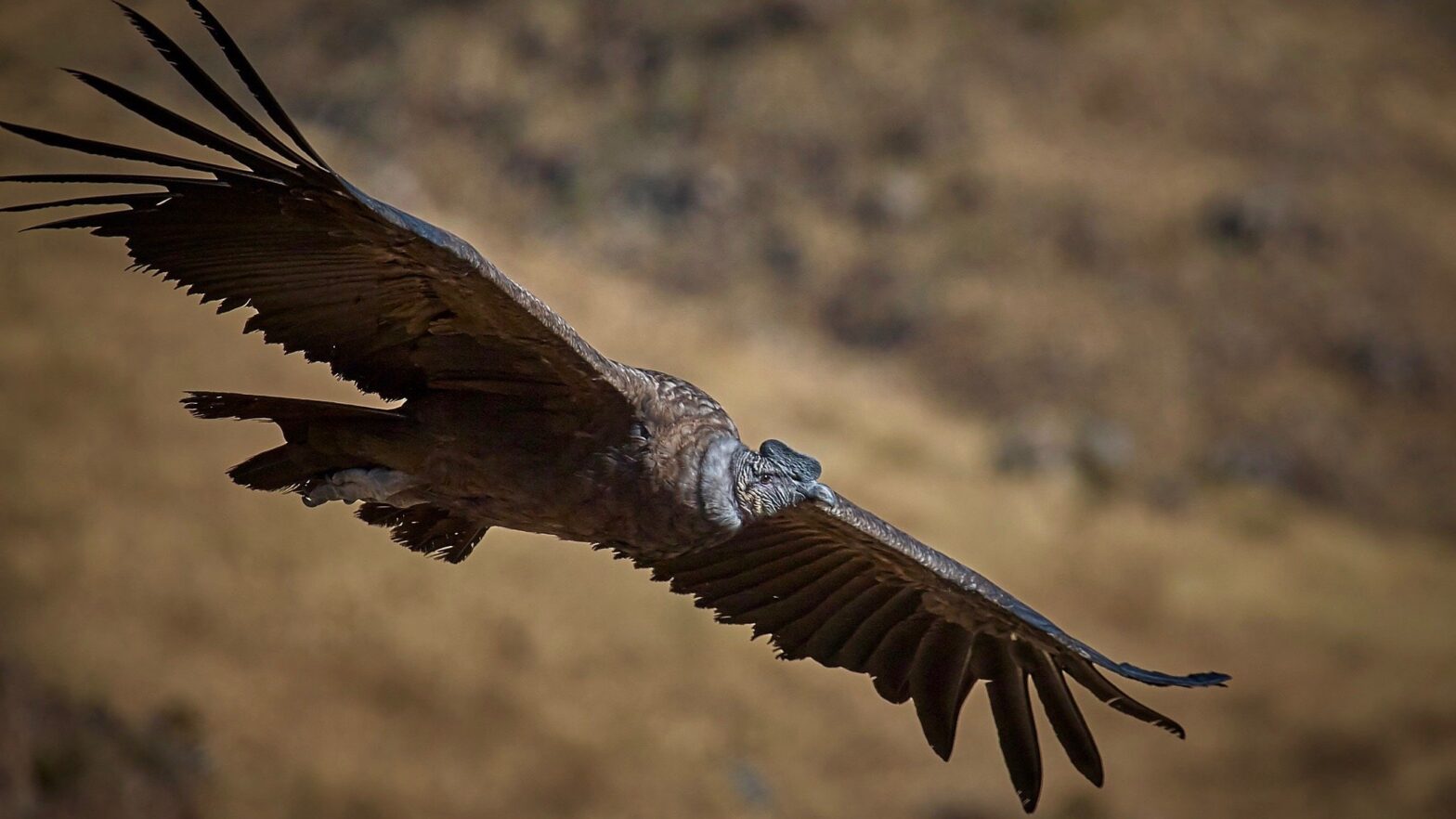 It starts with the whiff of death.

High above the Argentinian plains, an Andean condor (Vultur gryphus) — one of the world’s largest flying bird species — catches the distinctive aroma of decaying flesh on the wind. It’s quickly joined by other condors, perhaps a dozen or more, who start circling in the familiar pattern of all carrion-loving vultures.

Soon the massive condors spy the source of the delicious smell: a dead sheep or goat lying in a field. The hungry birds quickly angle in for descent, land around the body and begin to feed, tearing into the skin and meat with their sharp beaks.

Then the condors also begin to die.

At first they appear merely disoriented. Then they start to stumble, convulse and fall around the dead sheep. A few may try to fly, flapping mighty wings that span 10 feet — only to crash to the ground just a few yards away.

Eventually the field is littered with dead condors. Few, if any, escape.

This gruesome scene has played out several times in Argentina in recent years. In one incident that made worldwide headlines, 34 Andean condors died at a single site in 2018 — a major blow to a species with an estimated population of just 6,700 mature individuals, about 2,500 of which live in Argentina.

What’s killing these birds? Tragically, it’s a case of persecution by pesticide. Livestock owners who needlessly fear the imposing condors — which only eat carrion (not live prey) — attract the birds with dead sheep and other animals laced with powerful, illegal neurotoxin pesticides such as carbofuran and parathion. They know that anything that eats the carcasses will quickly die — in theory, leaving the rest of nearby livestock “safe” from predators.

Andean condors aren’t the only target. Farmers also use the pesticide-laden bodies to lure in pumas, foxes, lynx, eagles and other predators that really do occasionally prey upon livestock.

But it’s condors that have been hit hardest by the practice. A new paper published Jan. 15 in the journal Biological Conservation calls the poisonings “the greatest threat to the Andean condor.”

“We conclude that this problem can lead to the extinction of the species if we do not take action urgently,” says the paper’s lead author, Carlos I. Piña, a biologist with Universidad Autonoma de Entre Rios.

Piña and his fellow researchers — Rayen Estrada Pachecoab, N. Luis Jácome, Vanesa Astore and Carlos E. Borghi — studied 301 birds treated or collected by the Andean Condor Rescue Center in Argentina between 2001 and 2018. Using records and necropsies, they identified 21 poisoning events in Argentina that killed a total of 99 condors — 77 deaths in 2017 and 2018 alone (the paper does not include data from 2019). They also identified another 29 incidents of possible poisoning. In some cases the rescue center located birds suffering symptoms of poisoning that died a few hours after discovery.

The researchers also found that the poisonings occur throughout Argentina, have increased in frequency since the beginning of 2017, and now represent 79 percent of deaths reported to the rescue center. 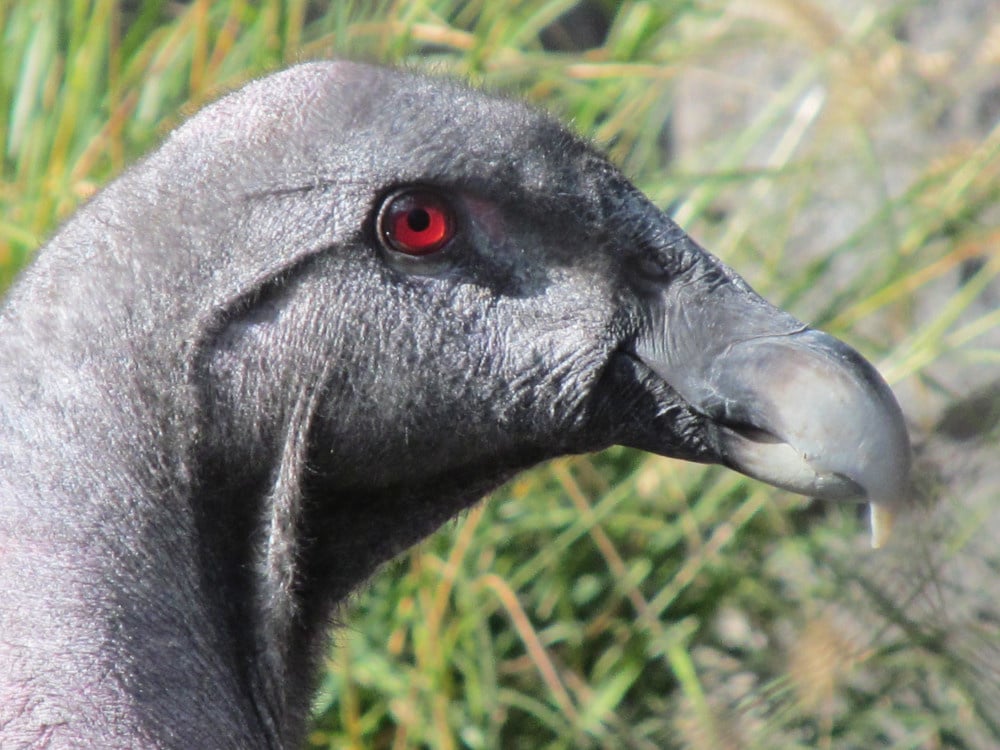 An Andean condor in the conservation breeding program at the National Aviary in Pittsburgh. John R. Platt / The Revelator / CC BY-NC-ND 3.0

The deaths are particularly alarming because condors already face a range of other threats, including illegal hunting, lead poisoning (similar to California condors) and collisions with power lines.

On top of that, their populations grow slowly under the best of circumstances.

“Condors have a very low reproductive rate,” Piña explains. They don’t reach sexual maturity until they’re 9 or 10 years old, and then they only nest every two years and raise a single chick at a time.

It’s now likely that more Andean condors are dying than are being born.

“These deaths occur at a rate and on a scale that does not allow the natural recovery of individuals to the population,” says Piña.

And it’s not just the condors being killed. The bodies of animals from eight other species have been found near dead condors, according to the paper. These include American black vultures (Coragyps atratus), kelp gull (Larus dominicanus), Molina’s hog-nosed skunks (Conepatus chinga) and pumas (Puma concolor).

The poisons are also potentially harmful to humans. “There are oral records of cases of people poisoned by the placement of these poisons,” Piña says. This poses a risk for officials tasked with cleaning up kill sites. The EPA links acute short-term parathion exposure to central nervous disorders, depressed red blood cell activity, nausea and other health risks.

And then there’s the big picture: the environmental cost of not having condors on the landscape if this problem persists.

“Vultures occupy a fundamental role in the ecosystem, since they eliminate the carcasses of dead animals which, if not removed, become sources of infection and can affect human health,” Piña says. “They’re like great natural cleaners.”

In additional to fulfilling that ecological role, condors also have cultural importance.

“For the native peoples of South America, it is the sacred bird that connects the world we live in with the cosmos,” Piña says. “We see condors on the emblems, shields and flags of the Andean countries. The loss of these birds also represents a great cultural loss for our society.” 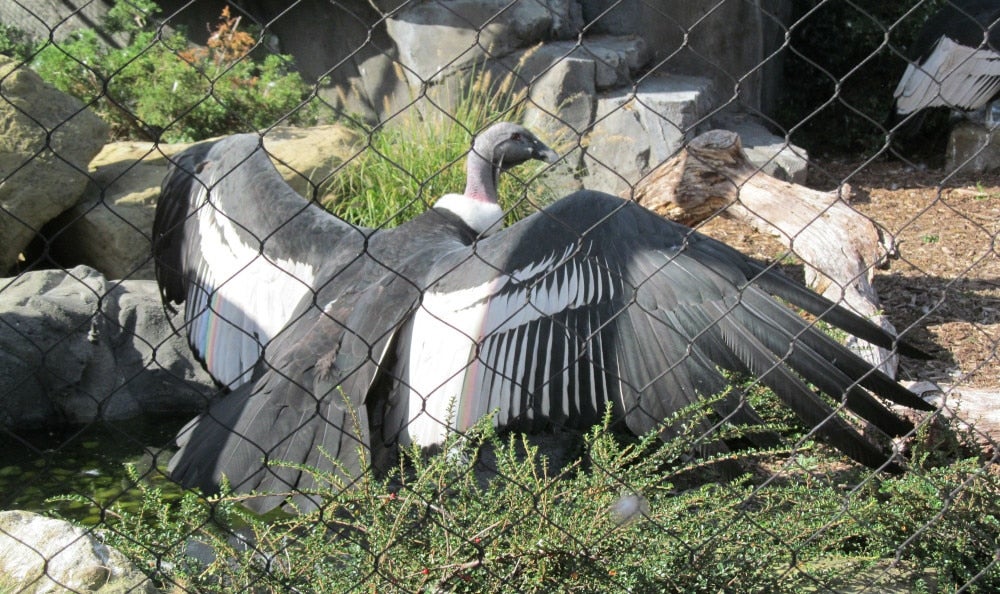 An Andean condor spreads its wings at the National Aviary in Pittsburgh. John R. Platt / The Revelator / CC BY-NC-ND 3.0

With the condors fulfilling so many important roles, and the frequency of poisonings increasing, how do we solve this problem?

Piña and his fellow researchers recommend a three-tier approach.

The first involves educating livestock owners about the importance of condors and the health risks from the pesticides. “We believe that working on education about the dangerousness of the use of these toxic baits is one of the lines of action needed to address this problem,” Piña says.

That won’t solve everything, he acknowledges, because some people already know the poisons are dangerous but use them anyway.

That brings us to the second solution: protecting livestock. “It’s essential to find ways to reduce predation without affecting environmental health,” Piña says. “An example could be the incorporation of cattle protection dogs, which have been shown to considerably reduce predation in Patagonia Argentina.” The researchers have started studies with cattle breeders to understand various techniques already in use in different parts of the country, as well as how ranchers perceive livestock losses they experience.

The third tier involves the law. These pesticides are already illegal — parathion was banned in Argentina in 1993, and a new law banning carbofuran and four other pesticides went into effect this past October — but they’re widely used anyway. Piña says adding one more law could help address that. “We believe that it would be better to have a national law on traceability and prescription of agrochemicals so that their trade is regulated, and sales of these products are under a professional’s prescription,” he says. “This way the easy access of these products would be diminished a little.”

Argentina, meanwhile, isn’t taking the problem lightly. In addition to the recent pesticide bans, the country and a partner foundation recently launched the Estrategia Nacional contra Cebos Tóxicos (National Strategy Against Poisoned Carrion). “The [program] aims to improve the detection and treatment of cases of poisoning, minimizing the risk to personnel involved in these processes,” Piña reports. “The plan also aims to generate a more precise knowledge of the sites of greatest conflict in order to guide conservation efforts and community outreach and education.”

A lot of work remains to be done to save the Andean condor from this emerging threat, but with more than 1 percent of all Andean condors killed since 2017, researchers say it’s time for Argentina — and perhaps neighboring countries — to act. Otherwise the great birds may become just another faint waft of death on the wind.