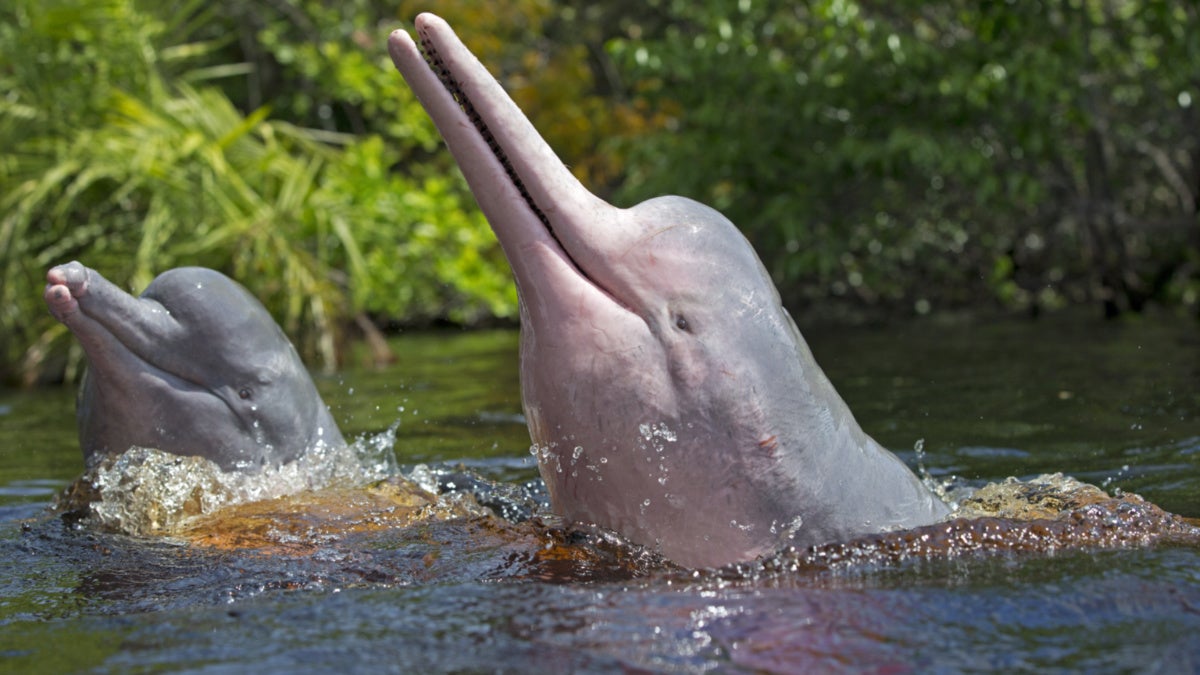 Amazon river dolphins are classified as endangered by the International Union for Conservation of Nature. Sylvain CORDIER / Gamma-Rapho / Getty Images

A pair of pink Amazon river dolphins emerges for just a moment, arcing above the chocolate brown waters inside the Mamirauá Institute for Sustainable Development, a research facility at the tropical heart of the Brazilian Amazon. Powerful jets of water spray out of their blowholes as these freshwater mammals take in air before submerging.

Moments later the duo reappear on the other side of the Japurá River, playfully dovetailing, and skirting the edge of the várzea rainforest — a seasonal floodplain where, in this part of Amazonia, river levels can rise and fall by up to 12 meters (39 feet) a year, at times opening up vast swathes of rainforest to these graceful swimmers.

“They are very special creatures,” says Natanael dos Santos, a guide working at the Mamirauá Institute. “They are extremely intelligent and can display a complex set of behaviors, even like humans.” These skilled, sharp-toothed hunters, often reaching more than eight feet in length, are well adapted to shifting river levels. During highwater periods they penetrate deep into the rainforest using echolocation to search murky pools amid submerged tree roots for prey including dozens of fish species, turtles and freshwater crabs.

The Amazon river dolphin (Inia geoffrensis) or boto, already classified as “endangered” since 2018 by the IUCN, the International Union for Conservation of Nature, is now coming under even more serious threat across Brazil and Latin America. An estimated population in the low tens of thousands is thought to exist in the wild, though counting the animals accurately in the Amazon’s murky streams is challenging. Like other river dolphins, the boto communicates with variable whistle tones.

Occupying the Amazon and Orinoco river basins, which cut across the northern half of the South American continent, these freshwater mammals were historically abundant, and are protected today by Brazilian law; it is illegal to kill them. But for years, poachers have targeted the dolphins, using their fatty blubber as bait to catch a carnivorous catfish called piracatinga, which is drawn to the scent of rotting flesh.

In January 2015, under the government of Brazilian President Dilma Rousseff, that chronic criminal behavior led to the introduction of a five-year moratorium on catching piracatinga in order to better protect the dolphins.

But that moratorium ended earlier this year and has yet to be renewed by the Jair Bolsonaro administration, which is undermining many other of Brazil’s environmental laws. Experts warn that the failure to extend it could lead to the extinction of the largest freshwater dolphin in the world — a fate that befell China’s Yangtze river dolphin (Lipotes vexillifer) in 2007, following years of overfishing, pollution and habitat degradation.

“I believe [the lack of a moratorium] could make them extinct,” warns Dr. Vera da Silva, a researcher for INPA, the Amazon research institute, who has been studying Amazonia’s dolphins for more than 30 years. “Not all the objectives of the moratorium were fulfilled, therefore the moratorium must be extended,” she explained.

Research by da Silva, published in 2017, found that a female dolphin’s pregnancy typically lasts 13 months. After that, the mother feeds a calf underwater for two years. Due to that long gestation and nursing period, females only reproduce every three to five years.

“They are a very slow reproductive species,” da Silva notes. “If the removal is higher [than the reproduction and rearing rate] the species does not have the capacity to replace itself.”

Separate findings by da Silva published in 2018 revealed that the Amazon river dolphin population in Brazil is halving every decade.

Prosecutors in Amazonas state, where the Mamirauá Institute is based, originally asked for the moratorium which started in 2015, warning that as many as 2,500 dolphins were being killed illegally each year for bait.

Da Silva reports that in November 2019 she met with officials from the Secretariat of Production of the State of Amazonas (SEPROR), to discuss the extension of the moratorium in Amazonas. But nothing has happened since, and the peak fishing season is due to begin in July.

“There is a huge amount of ignorance,” she warns. “We need better information on fishing practices. There aren’t strong enough laws to make fishermen report what they catch.”

Marcelo Oliveira, a conservation specialist at World Wildlife Fund Brazil (WWF), agrees with that analysis. “Fishing is a threat but we don’t have enough data,” he says. “If we don’t know where the river dolphins are, we can’t say how bad [the threat] is. But it’s expensive to do expeditions to monitor population trends.”

WWF has been innovating — utilizing drones to accomplish the difficult job of making improved population estimates, flying 2.5 kilometer strips of river to record footage. “It’s much cheaper and more efficient,” than doing boat observations, he says. The NGO is currently partnering with British universities to analyze the drone findings using artificial intelligence.

But even with better data recording practices and an improved data set, Oliveira says that the river dolphins are still at great risk from a broad range of threats. “Bycatch sees so many dolphins caught in fishing nets, gold mining in the region has led to mercury poisoning in the water, and the construction of hydroelectric dams has reduced their habitat and genetic pool,” he explains.

Oliveira believes that for now the focus of dolphin conservation should be on improved community engagement across the Amazon basin, with strong outreach to fishermen, in a region whose burgeoning population has now topped 34 million.

Fernando Trujillo, scientific director of the Fundacion Omacha, a Colombia-based environmental NGO specializing in protecting river dolphins set up in 1993, says that conservation must also be addressed on an international level.

“The end of [Brazil’s] moratorium will send out the message that fishing is okay — even in other countries across Latin America,” he says. “We need to work together with all the countries in terms of policy, agreeing on the same criteria and same legislation, especially when it comes to monitoring the borders.”

Trujillo, who is also co-chair of the International Whaling Commission’s small cetaceans committee, is calling for the Brazil moratorium to be extended another five years. “For so many reasons, it’s a species we need to conserve and save,” he says. “Alive dolphins can produce more money than dead ones for local communities through ecotourism.”

Indigenous beliefs hold that the river dolphin — which transforms from grey to pink as it ages — is a magical creature. Males and females are both said to have the ability to morph at will into either a handsome man, or beautiful woman respectively, in order to seduce villagers in the dark of night. But scientists see the mammals as top predators of the Amazon aquatic ecosystem — considering them the jaguars of the rivers.

A spokesperson for the Ministry of Agriculture, Livestock and Supply said it had not yet extended the moratorium because “it is necessary to evaluate its effects on the recovery of populations of porpoises and caimans in order to verify the effectiveness of this fisheries management measure.” When asked by Mongabay to comment, the ministry did not provide a timeframe for this evaluation period.

There is another myth about the Amazon river dolphin. It is said that to kill one is bad luck. Not knowing what negative aquatic impacts might radiate from the extinction of this top predator, authorities may want to heed this legend as they try to decide whether or not to renew Brazil’s moratorium.