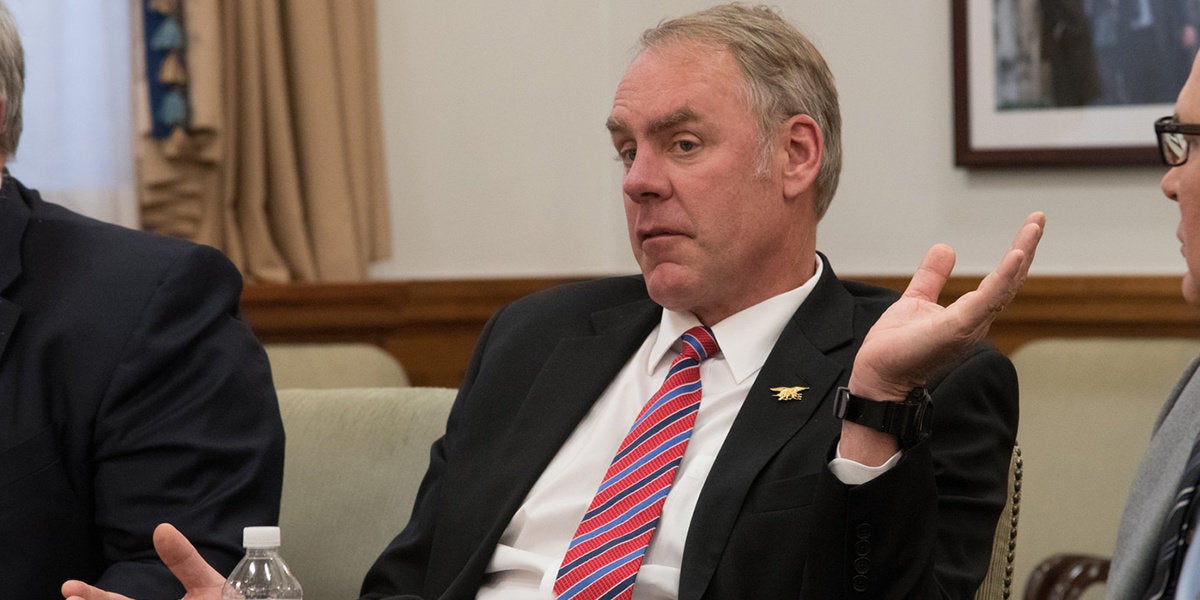 Interior Secretary Ryan Zinke, who has spent his first 15 months opening public lands to oil and gas drilling, has been linked to a development project with Halliburton chairman David Lesar, POLITICO reported Tuesday.

Lesar is backing a real estate development in Zinke’s hometown of Whitefish, Montana and receiving help from a foundation started by Zinke and currently run by his wife, Lola.

Lola Zinke has agreed in writing to allow the Lesar-funded development, which would convert an industrial area into a hotel and shops, to build a parking lot on land donated to the Zinke’s foundation for a Veteran’s Peace Park, which has remained undeveloped for nearly 10 years. The Zinkes also own land across from the development that stands to increase in value, real estate agents told POLITICO.

The development would also include a microbrewery, a project for which Zinke has spent five years lobbying town officials. Whitefish city planner David Taylor told POLITICO that the developers would allow the Zinkes to own and run the microbrewery, though the developers themselves said nothing had been decided.

“The sad fact is that this is just the latest example of Zinke attempting to personally benefit from a resource that should benefit the public,” Whitefish conservation group the Western Values Project Executive Director Chris Saeger told The Associated Press. The Western Values Project has called for an investigation into Zinke’s offer of the land, donated for a park, to private interests and has asked Zinke to recuse himself from any future arrangements the Department of the Interior (DOI) makes with Halliburton.

Halliburton is the largest oil services company in the U.S., and ethics experts told POLITICO any deal between the company and the Zinkes presents a conflict of interest, since Halliburton stands to benefit from DOI plans announced under Zinke to open public lands to fossil fuel interests, such as the decision to open U.S. coasts to offshore oil drilling. POLITICO highlighted the DOI’s move under Zinke to loosen Obama-era fracking restrictions on federal lands after lobbying by Halliburton, one of the world’s largest fracking companies. DOI is also responsible for drilling and pipeline safety standards

Marilyn Glynn, acting director of the Office of Government Ethics under President George W. Bush, also thought the development deal meant that Zinke should now remove himself from any decisions that could impact Halliburton.

“In a previous administration, whether Bush or Obama, you’d never run across something like this,” she told POLITICO.

Zinke claimed he had resigned from the foundation that owns the park land after becoming secretary, but the foundation’s annual report, which he says is a mistake, lists him as an officer, while his wife is president and his daughter is treasurer.

Public Citizen federal ethics law specialist Craig Holman said even his wife and daughter’s involvement in the deal is enough to trigger conflict of interest rules that require executive branch officials to remove themselves from decisions impacting groups with which they or their close relatives have a financial relationship.

“Entering this type of business relationship could very clearly open the doors [of government] to business interests that have stakes before the office holder,” Holman told POLITICO. “Clearly, any substantial development project next to the vacant lot owned by Zinke’s foundation would significantly boost the value of the lot. The conflict-of-interest statute would be invoked if even the nonprofit on which Zinke or his spouse serves as an officer, as either paid or unpaid officers, derives a financial benefit.”