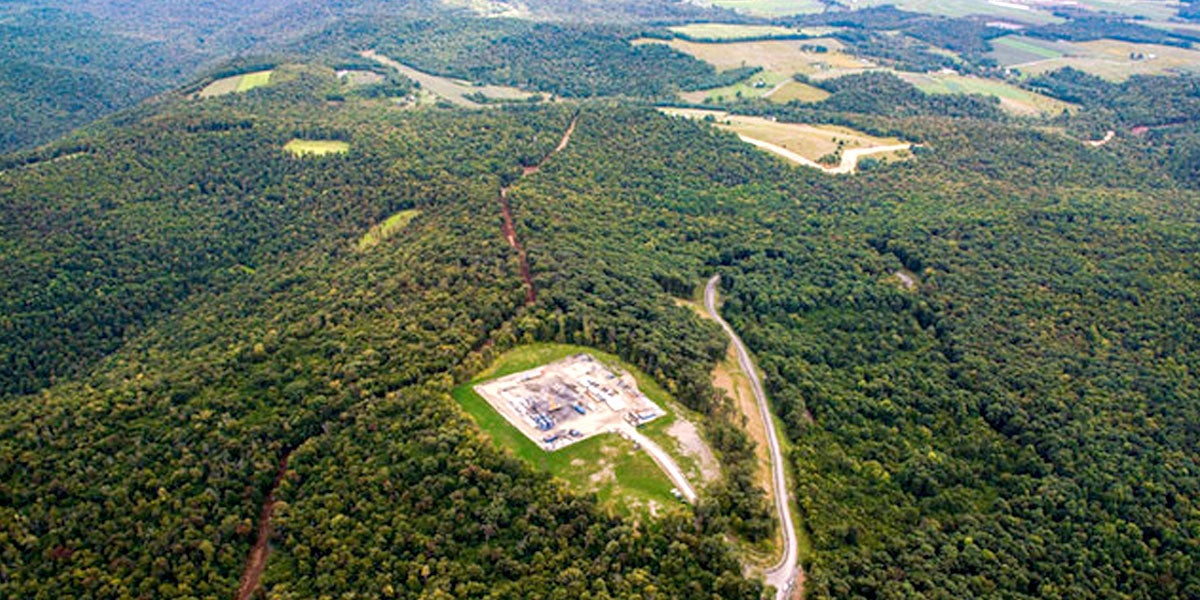 A fracking site in the Marcellus Shale region in Pennsylvania. Photo credit: EcoFlight.

The Trump administration intends to scrap and rewrite an
Obama-era rule designed to make fracking on federal lands safer.

Drilling has taken place on federal lands for years, with more than 100,000 wells in existence. In 2015, the Interior Dept. issued new standards aimed at making the process safer, including stricter and higher design standards for wells and waste fluid storage facilities to mitigate risks to air, water and wildlife. Companies would also be required to publicly disclose chemicals used in fracking.

However, U.S. District Judge Scott Skavdahl blocked the Obama rule in June after accepting the argument from energy companies and several states that federal regulators lack congressional authority to set rules for fracking.

The Obama administration appealed the decision to the 10th Circuit, but the rule could be killed for good. The Trump administration said in court filings Wednesday it is withdrawing from the lawsuit.

Justice Dept. lawyers representing Interior and the Bureau of Land Management asked the court to “continue the oral argument and hold these appeals in abeyance pending a new rulemaking” on the issue.

A spokeswoman for Interior Sec. Ryan Zinke confirmed with the Associated Press that the administration intends to submit a new rule.

Neal Kirby of the Independent Petroleum Association of America praised the withdrawal of the rule, calling it “unnecessary, duplicative and would further drive away independent producers from federal lands.”

“Every energy-producing area has different needs and requirements, which is why the states are far more effective at regulating hydraulic fracturing than the federal government,” he said.

Many environmental advocates felt that the 2015 rule was already too lenient, but the Trump administration’s latest action could be even more worrisome to fracking opponents.

“This disturbing decision highlights Trump’s desire to leave our beautiful public lands utterly unprotected from oil industry exploitation,” said Michael Saul, an attorney with the Center for Biological Diversity. “Backing away from these modest rules is doubly dangerous given the administration’s reckless plans to ramp up fracking and drilling on public lands across America.”

Other environmental organizations spoke out against the announcement.

“Today’s news demonstrates the degree to which Secretary Zinke and the Trump administration are in the pocket of the oil and gas industry,” said Earthjustice attorney Mike Freeman.

Earthworks policy director Lauren Page said: “By moving to overturn these common-sense protections, the Trump administration is positioning itself against the disclosure of toxic chemicals, protecting clean water and preserving our public land.”

Groundwater contamination is one of the biggest concerns about unconventional oil and natural gas production. While the industry maintains the safety of the process, in December the U.S. Environmental Protection Agency released its highly anticipated final report identifying cases of impacts on drinking water at each stage in the hydraulic fracturing water cycle.

The disposal of fracking wastewater into underground wells has also been linked to the alarming increase in seismic activity in states such as Oklahoma and Kansas.

“With [Wednesday’s] decision, Trump is making it clear that he thinks we need more fracking operations contaminating our drinking water, causing earthquakes and polluting our environment, not less,” Sierra Club Beyond Dirty Fuels campaign director Lena Moffitt said. “The Sierra Club will continue to defend this rule, ensuring that our publicly-owned lands remain protected from fracking and Donald Trump.”

President Trump has
plans to open up federal lands for more energy development. As a candidate, Trump campaigned on a promise to “unleash America’s $50 trillion in untapped shale, oil, and natural gas reserves, plus hundreds of years in clean coal reserves.”

He accused President Obama of “denying millions of Americans access to the energy wealth sitting under our feet” by restricting leasing and banning new coal extraction.

Incidentally, the actions of the current administration go against the sentiments of the majority of Americans, who are opposed to fracking and drilling of public lands, according to
a new Gallup poll.

The poll, released on Tuesday, determined that 53 percent of Americans oppose fracking as a means of increasing the production of natural gas and oil in the U.S. Only 46 percent support for opening up federal lands for oil exploration, compared to 65 percent who favored it in 2014. 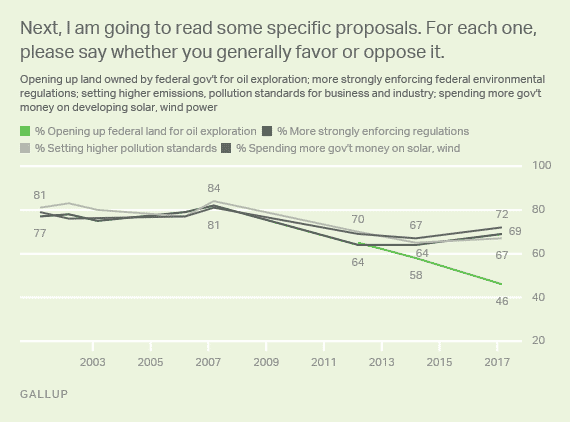 Public opposition to fracking has grown in recent years, as counties and cities across the country are passing resolutions and ordinances to ban the practice.

Even states are getting behind the action. The Maryland House of Delegates
passed a milestone bill earlier this month that would ban fracking statewide.

Fracking opponents are now urging the Maryland Senate to pass the same legislation. On Thursday morning, a group of protesters‚ including including faith leaders and western Maryland residents, barred the entrance to the State House in a peaceful act of civil disobedience. Thirteen were arrested.

“As stewards of God’s creation, United Methodists are opposed to hydraulic fracturing because of the serious consequences for the environment, including damage to water and geological stability,” said Rev. Julie Wilson, chair for the Board of Church and Society for the Baltimore Washington Conference of the United Methodist Church. “We support a ban on fracking.”

Garrett County in western Maryland is likely to be the first area targeted if fracking is allowed. The demonstrators say that fracking would threaten the area’s local economy, which relies heavily on tourism and agriculture.

“The more we learn about fracking, the more we know we need a ban. Our water, health and climate are far more important than short term gain for the natural gas industry. Once free of worrying about fracking in Maryland, we can all turn our attention to a renewable and sustainable future.”