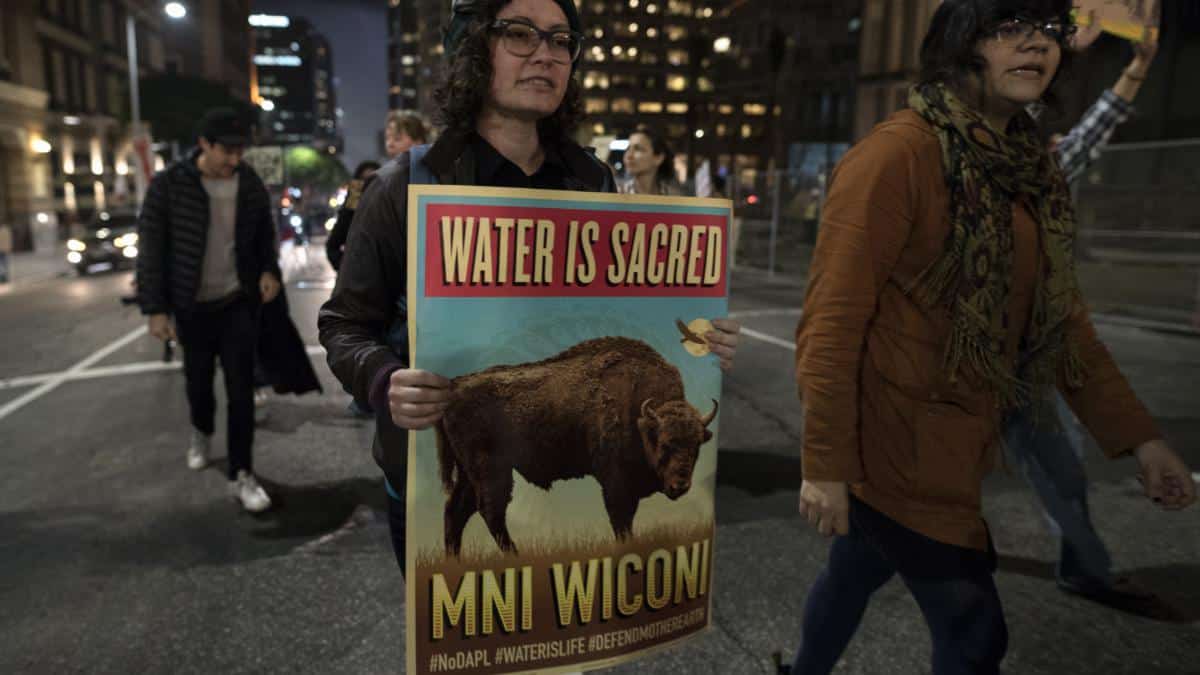 Protesters in Los Angeles, CA, march on February 8, 2017 against the Army Corps of Engineers' decision to grant an easement for the Dakota Access Pipeline. Ronen Tivony / NurPhoto / Getty Images

A coalition of environmental advocacy groups on Monday threatened to sue the U.S. Army Corps of Engineers for failing to ensure that Trump-era development permits “will not jeopardize endangered species and critical habitat across the country.”

The Center for Biological Diversity, Center for Food Safety, Natural Resources Defense Council, Sierra Club, Waterkeeper Alliance, and other groups filed their formal notice to the Biden administration regarding Nationwide Permits reissued during the final days of Donald Trump’s presidency.

At issue are 16 permits that, according to the Center for Biological Diversity, “will allow hundreds of thousands of discharges of dredged or fill material into the nation’s waters and wetlands from oil and gas development, pipeline and transmission-line construction, and coal mining.”

“The U.S. Fish and Wildlife Service and National Marine Fisheries Service have previously found that these activities—which are approved with little or no environmental review—threaten iconic species including whooping cranes, Florida manatees, and the hundreds of migratory birds that need wetlands to survive,” the center said.

We just launched a lawsuit with allies over the Army Corps' failure to ensure Nationwide Permits reissued during Trump's final days will not jeopardize endangered species and critical habitat across the country. https://t.co/2ukhg0qoVs

“Rather than comply with a court order to ensure that endangered species are protected from further death and destruction, the Trump administration doubled down on its original violation by issuing even weaker Nationwide Permits with fewer protections for these species,” Daniel E. Estrin, general counsel for Waterkeeper Alliance, said in a statement.

“It’s long past time for the Corps to rethink its approach to dredge-and-fill permitting and to ensure that these activities will not put endangered species or their habitat in jeopardy,” Estrin added.

Jared Margolis, senior attorney at the Center for Biological Diversity, said in a statement that the Trump administration “flagrantly violated bedrock environmental laws when it reissued the Nationwide Permits, without regard for the people, places, or wildlife that are affected by this deeply flawed program.”

“I’m hoping President Biden will prevent the Corps from continuing to use the permits to rubber-stamp major projects like oil pipelines that leak and spill, degrading the clean water that people and wildlife need,” added Margolis.

On his first day in office, Biden issued an executive order revoking Keystone XL’s permit and calling for a review of the 15 others.

“While the groups are hopeful that this process will result in important changes to the program, if the Corps continues to ignore its duty to properly account for the harm Nationwide Permit activities pose to species, then litigation may be necessary,” the coalition said in its statement.