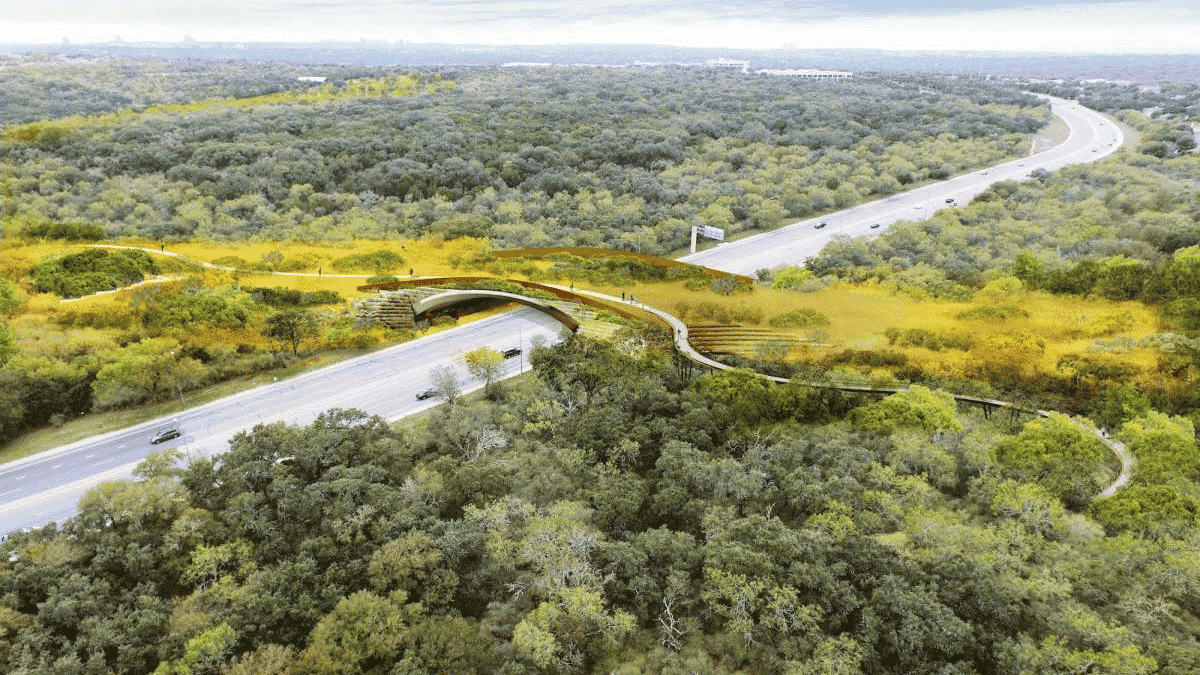 As the coronavirus pandemic has kept many people apart, two sides of a Texas park have finally come together.

The Robert L.B. Tobin Land Bridge, which connects San Antonio’s Phil Hardberger Park across a six-lane highway, opened Friday afternoon for people and animals alike. A project ten years in the making, the bridge is now the largest completed wildlife crossing of its kind in the U.S.

“For many years, the Robert L.B. Tobin Land Bridge was only a dream. Thanks to overwhelming community support of the 2017 Bond, the generosity of donors from across the city and the hard work and dedication of so many, the vision is now a reality,” former San Antonio Mayor Phil Hardberger said in a City of San Antonio Parks and Recreation press release. “I am honored to invite San Antonians to come experience the Land Bridge and hope it will offer them an escape from the stresses of this year — a place where they may spend time with family and friends and connect with the natural world.”

The Robert L.B. Tobin Land Bridge is united! The trail over the Land Bridge is now open!  You are invited to come experience your city's newest landmark.

Check out our Know Before You Go article to plan your trip: https://t.co/BnnRguwsUP pic.twitter.com/uIzkObTuFV

The idea for the bridge first emerged in 2010, before the park had even opened, KSAT reported. Park planners knew that the park would be bisected by Wurzbach Parkway, interrupting park goers’ experience and putting animals at risk.

Hardberger, who was the leading official behind the idea for the bridge, said that animals would often try to cross the highway.

“Even though you do put up barriers, they’ll get across or start to get across. Right now, it’s six lanes, TxDOT says it will eventually be eight lanes,” Hardberger told KSAT. “We’ve had some accidents between cars and deer especially, and some of the smaller animals as well.”

The problem of animal and vehicle collisions is bigger than one park in Texas.

“Over the most recently reported 15-year period, wildlife-vehicle collisions have increased by 50 percent, with an estimated one to two million large animals killed by motorists every year,” Rob Ament, Western Transportation Institute road ecology program manager, told National Geographic in 2019.

In the U.S., 21 threatened and endangered species face extinction partly because of traffic accidents, among them Florida’s Key deer and Alabama’s red-bellied turtles.

Wildlife crossings — either above or below roadways — have emerged as an effective solution to this problem ever since France constructed the first one in the 1950s.

“You can get reductions of 85 to 95 percent with crossings and fencing that guide animals under or over highways,” Ament told National Geographic.

The San Antonio bridge is notable for its size and the fact that it accommodates people as well.

“The land bridge is 150 feet wide and approximately the same distance across,” a parks department spokesperson told HuffPost. “It’s designed at that size to accommodate both people and animals, and we believe it is both the only and the largest built for this dual purpose.”

Animals in the 330-acre park who could benefit from the bridge include ringtails, squirrels, coyotes, lizards, raccoons and deer. Construction crews already observed some of them making use of the bridge before its official opening, KSAT reported.

As of 1 p.m. Friday, people were able to enjoy it as well. It is now open sunrise to sunset, in keeping with park hours. In addition to safeguarding animals and providing new recreation opportunities, the bridge will serve as a habitat for native plants.

“The Land Bridge connects people with nature in the heart of San Antonio. I look forward to watching the landscape grow and mature with native trees and plants and observing wildlife through viewing blinds designed by local artists. The bridge is an amazing achievement,” current San Antonio Mayor Ron Nirenberg said in the parks department press release.

“The words that come to mind are unity, understanding, caring and a little bit of mystery to wonder what’s on the other side of that bridge,’ I think I’ll walk across there, find out what’s going on,'” Hardberger told KSAT. “I like all of those words that describe a bridge because it helps unite San Antonio, this is a common gathering place.”