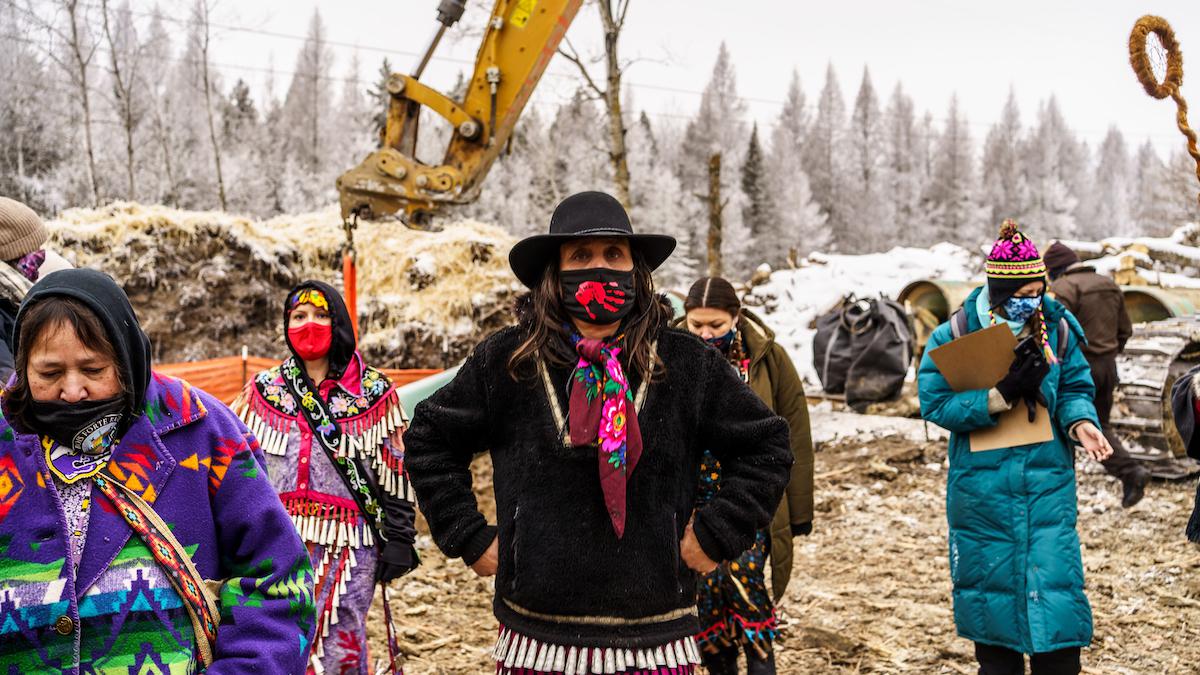 Water protectors were arrested Thursday after halting construction at a Minnesota worksite for Enbridge’s Line 3 project by locking themselves together inside a pipe segment.

“After moving to Minnesota to attend college and study environmental science, I was excited to be in a place where people valued protecting the Earth and finding a viable future. What I found, however, was a state that had formed ‘ambitious’ climate goals yet endorsed one of the dirtiest fossil fuels, tar sands oil,” water protector Abby Hornberger said in a statement. “I realized that Indigenous ways of knowing and practicing harmony with the environment are continuously ignored.”

Hornberger explained that “the Line 3 pipeline far outweighs all clean energy initiatives and progress being made in renewable energies. Line 3 will destroy Minnesota’s essential clean water resources for future generations and will ultimately drive us into climate doom. Education and spreading awareness is no longer enough to create meaningful change for me.”

“Enbridge’s last-ditch effort to build fossil fuel infrastructure is killing people and the planet. I refuse to be complicit in settler colonialist practices, and feel that I have to put my body on the line to protect Indigenous communities’ sovereignty and all of our futures,” Hornberger added. “This is not just an issue relevant to some, it affects each of us on a deeper level that goes beyond our daily lives. It determines if we will have a livable future.”

FOR IMMEDIATE RELEASE: Water Protectors Lock Down Inside Line 3 Pipeline to #StopLine3

Indigenous and environmental activists have long opposed the Canadian company’s efforts to replace an aging oil pipeline with a larger one running from Alberta, through North Dakota and Minnesota, to Wisconsin — noting Enbridge’s track record on spills and that cultural maps indicate “numerous sacred and significant sites lie in the path of the Line 3 project.”

Minnesota Gov. Tim Walz has come under fire from Indigenous and climate leaders in recent months as the state has approved key permits that Enbridge needs to complete the new Line 3, especially given the Democratic governor said publicly in February of 2019 that projects like this one “don’t just need a building permit to go forward, they also need a social permit.”

As some water protectors on Thursday protested inside a pipe segment a few miles from a man camp in Backus, “dozens more held space,” according to the Giniw Collective. The group also pointed out that “Enbridge is working 24 hours per day at several worksites, as a pending injunction to halt work while tribally led lawsuits are heard has yet to be decided.”

Water protector Andrew Lee said that he participated in the action against Line 3 on Thursday “to protect the treaties that my ancestors failed to uphold.”

“It breaks my heart and enrages me to see how these people are desecrating the Earth and the lengths they will go to leech every last dollar they can from its surface,” they said. “But for as much as I’m here in anger and fear, I’m also here in love.”

The good news is, resistance to the pipeline is growing.

On-the-ground action to stop construction is led by Indigenous womxn and Two-Spirit folks at @GiniwCollective, with @nfld_al3, @MN_350, and @SunriseMvmtTC all working together with them to #StopLine3. (10/14)

Thursday’s action came after eight people were arrested on Saturday, when scores of water protectors and Anishinaabe jingle dress dancers gathered at the Mississippi River, then walked onto a Line 3 worksite. According to a statement from organizers:

After praying and sharing a healing jingle dance, water protectors went to Haypoint, Minnesota, where Enbridge is actively boring under Highway 169 on its way to the Willow and Mississippi Rivers.
Construction stopped as water protectors held space and documented irregularities in the pipe being put into the ground. Nearly 30 police squad cars from multiple counties and the Department of Natural Resources were onsite.

The statement, which confirmed the eight arrests, also said that “one arresting officer in a Cass County uniform without a badge refused to put on a face mask and grinned at the crowd as he held a zip-tied water protector. Enbridge’s worksites and man camps have quickly become hotspots for Covid-19 in Aitkin County.”

While critics of Line 3 and similar projects have long raised health and safety concerns — including about the well-documented connection between man camps and the epidemic of Missing and Murdered Indigenous Women — the pandemic, which has hit Indigenous communities hard, has further fueled opposition.

“We saw Minnesota’s police officers protecting a Canadian tar sands pipeline being built by mostly out-of-state workers, for sale on foreign market,” said Tara Houska, founder of Giniw Collective. “We need good-paying jobs up north that don’t require us to destroy our environment. Where is the investment in the north land? Where is the upholding of treaty rights? Where is the Walz administration on this pandemic pipeline?”

We are here to protect the water. Hundreds of us today at the Rally for the Rivers and more every day. We will #StopLine3.@HonorTheEarth @GiniwCollective @MNIPL pic.twitter.com/RdsOEQAOgX

Activists are calling on President-elect Joe Biden to stand up for those “on the frontlines of fossil fuel racism and the climate crisis” by stopping Line 3. On Thursday, more than 75 Indigenous women leaders wrote to the next president, urging him to block Line 3 and two other projects that “pose grave threats to Indigenous rights, cultural survival, sacred water and land, the global climate, and the public health crises within our communities, which have been greatly exacerbated by Covid-19.”

As Houska, Couchiching First Nation Anishinaabe and a signatory to the letter, put it: “The Biden administration can uphold their climate justice claims by acting to stop Line 3, stop Keystone XL, and stop Dakota Access Pipeline, now.”