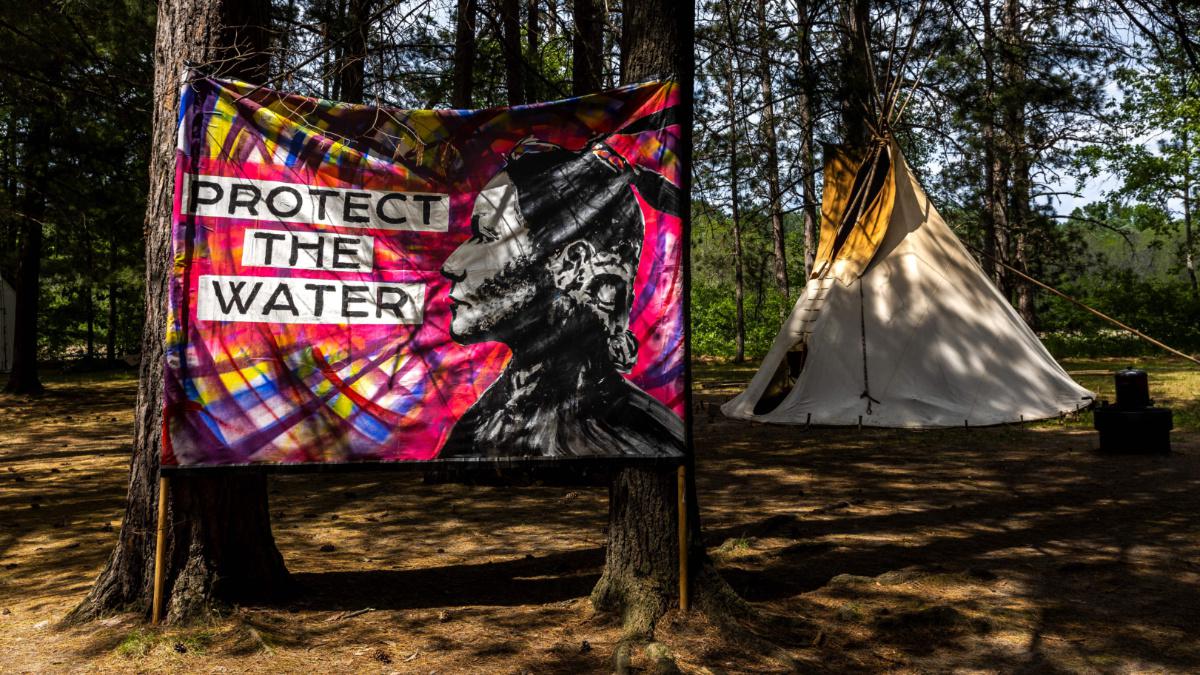 Thousands of people from across the nation traveled to northern Minnesota this past weekend to join Indigenous leaders in what organizers described as the “largest resistance yet” to Line 3, an Enbridge-owned tar sands pipeline whose construction has accelerated in recent days as opponents warn the project poses a threat to waterways and the climate.

The Treaty People Gathering kicked off Saturday, the first of several expected days of action against Enbridge’s multi-billion-dollar project, which aims to replace and expand the Canadian company’s existing pipeline along a route that crosses more than 200 bodies of water and 800 wetlands.

If completed, the pipeline would have the capacity to carry more than 750,000 barrels of tar sands oil per day from Alberta, Canada to Wisconsin.

Indigenous leaders have decried the pipeline expansion as a brazen violation of treaty rights that endangers sacred land. Attempts to block the pipeline in court have yet to succeed, leading Line 3 opponents to turn their focus to large-scale protests and civil disobedience.

“We need to protect all that we have left of the sacred gifts and land,” said Dawn Goodwin of the Indigenous-led RISE Coalition. “I said that I would do all that I could. And I have done all that I could in the legal system, thus far following that process. Now, they have failed us through regulatory capture and corporate financing. So now we need you.”

We’ve got over 1000 people headed up to northern Minnesota to #StopLine3, but we want you up here too!

Let Winona and Tanya tell you all about the great camping along the Shell River, a beautiful river Enbridge plans to cross with their toxic tar sands pipeline. pic.twitter.com/GnBwYbByDr

Biden hears our voices, but the wetlands and wild rice need action.”

“We cannot mitigate the climate crisis and we cannot stand idly by as DAPL and Line 5 fossil fuels flow illegally, as young people chain themselves to the Mountain Valley pipeline and Line 3,” Houska continued. “Stand up for what is right, stand up for those not yet born.”

Around 250 people have been arrested in demonstrations against Line 3 since construction began last December.

“From April 1 through June 1, work on the pipeline itself ceased due to spring road and environmental restrictions, though Enbridge continued building pumping stations,” Minnesota’s Star Tribune reported Saturday. “Over the past week, the full workforce—which numbers over 4,000—returned as direct pipeline work resumed.”

Hundreds of environmental groups and Indigenous leaders have appealed directly to Biden to intervene against Line 3, just as he pulled the plug on the Keystone XL pipeline shortly after taking office.

In a March letter, a coalition of more than 370 organizations warned Biden that “Line 3 is a threat to water, Indigenous rights, and our global climate, and its rushed construction in the midst of the Covid-19 pandemic is an extreme danger to Minnesotan communities and energy workers alike.”

But Biden has yet to take any action on Line 3, and just last month his administration formally opposed a shutdown of the Dakota Access Pipeline, angering environmentalists who said the move flies in the face of the president’s vows to treat the climate crisis as an emergency that requires bold action.

“President Biden did the right thing when he canceled the Keystone XL pipeline early on in his term,” Rep. Ilhan Omar (D-Minn.) tweeted on Friday. “Now he must do the right thing and cancel Line 3. I renew my calls to end this destructive, unnecessary giveaway to Big Oil.”